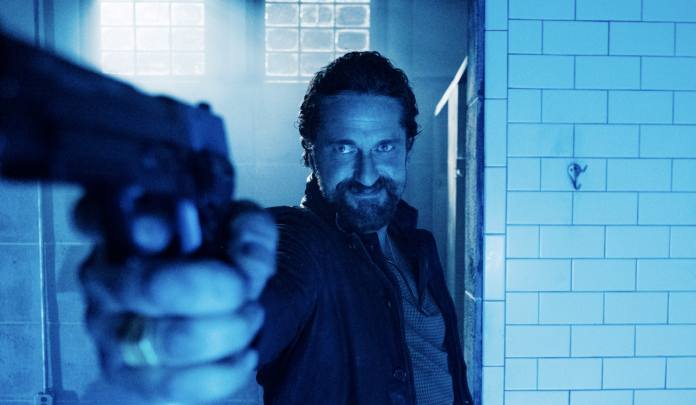 Reteaming with regular collaborator Frank Grillo as well as an against type Gerard Butler, Copshop has everything we have come to expect from Carnahan, with memorable characters, great performances and some hard hitting violence.

While in no way perfect, which I will come to later, Copshop proves to be an extremely enjoyable slice of pulp crime fiction, clearly emulating the 70’s thrillers so clearly beloved by its director. The film is very much in the same vein as the works of Don Siegel, Walter Hill and John Carpenter whose own Assault on Precinct 13 (1976) is highly reminiscent of Copshop.

On the run from assassins, Weasley con man Teddy Murretto (Frank Grillo) gets himself arrested by assaulting rookie cop Valerie Young (Alexis Louder). Teddy’s thinking is that he will be safer locked inside a police station than outside on the run. Unfortunately for him he didn’t calculate the lengths famed hitman Bob Viddick (Gerard Butler) will go to in order to complete the contract on Teddy’s life.

Viddick gets himself arrested and put in the cell across from Teddy so he can carry out the assassination. The arrival of competing hitman Anthony Lamb (Toby Huss) changes Viddick’s plans, with him, Teddy and Valerie having to work together to deal with the crazed Lamb before he kills them all.

Carnahan sets the tone of Copshop straight out the gate, opening the movie with the main theme from Lalo Schifrin’s Magnum Force (1973) score. It’s not only the score that is from a different era however. As mentioned, Carnahan gives the film a very 1970’s aesthetic, not only in his shooting style but with the film’s inclusion of morally grey characters and its extremely pessimistic view of the world.

In fact, out of the film’s entire roster of characters only one could truly be considered “good”, and neither of them are our two main leads. Grillo’s con man Teddy is one of the actor’s more interesting characters recently, far removed from the action man type he portrayed in Boss Level. Teddy seems like the kind of guy that would sell out his own mother to get ahead. Even his concern over his wife and son is fleeting, with him always seeming to look out for himself.

Still, there is still that expectation that he will still do the right thing and assist Alexis Louder’s Valerie in stopping Toby Huss’s crazed hitman. Grillo has recently gone on record to state his unhappiness with the cut that has been released and that much of his performance ended up on the cutting room floor, reducing the impact of his performance.

Apparently this wasn’t due to Carnahan whose initial cut was changed to what we now see. Perhaps it was to do with the producers or distributors. It would certainly be interesting to see what changes were made. Maybe somewhere down the line Carnahan will get the chance to release his preferred cut.

Because of these cuts it does seem at certain points that both Grillo and especially Gerard Butler are supporting players in their own movie, with relative newcomer Louder clearly being the lead character. That isn’t to say they aren’t good, because even if their characters appear somewhat underwritten both are great fun in their respective roles, especially Butler who is clearly relishing not playing the hero for a change.

It is a little while before Butler appears on screen, and audiences may be disappointed that he isn’t as involved in the action scenes as much as expected . Still, when he finally does he is still the 100 percent badass the audience expects him to be.

One memorable scene involves his extremely violent and coldblooded takedown of a corrupt cop. The level of violence he enacts on his victim isn’t surprising though, as earlier we are informed of the time Viddick cut a man’s leg off to then go and beat him to death with it.

Butler has attempted villainous roles before, having a memorable role in the derided Gods of Egypt (2016), where he chewed the scenery with aplomb. His character here is more nuanced, with Viddick not being an out and out villain. He does have some semblance of a code, with him exclaiming how he’s just a professional doing a job.

One notable exchange has him trying to explain to Grillo the difference between himself and a true psychopath, something which the later appearance of Toby Huss makes crystal clear. Huss is having the time of his life, with Lamb being a true scene stealer.

Everytime Huss is on screen the film’s enjoyment level goes up a few notches, with him getting the film’s best lines. He may not seem much of a physical threat for either Butler, Grillo or Louder but he certainly puts them through their paces.

As great as they are, it is Valerie Louder’s rookie cop that holds everything together. This is a great star-making role for her with her giving a tough but vulnerable performance, with us getting to know more about her as the film progresses. There’s an interesting dynamic that develops between her, Grillo and Butler, with her not knowing which of them she can trust, adding to the overall tension of the situation.

Louder also gets involved in a good deal of the film’s action, taking quite a bit of punishment. She is much more believable as a female action lead than what we have been shown recently in the likes of Jolt (2021) and Gunpowder Milkshake (2021). It helps that the action is more grounded and believable than anything in those films.

Saying that, audiences shouldn’t go into Copshop expecting a full on action movie. While there is action on show it mostly all comes in the last third of the film, with Carnahan building up to it. When it does come it is well carried out, mixing some hand to hand fighting and well choreographed shootouts.

It is clear that Copshop is a low budget affair and this may be why there isn’t as much action as some of Carnahan’s other films. With the majority of the film being shot in the same location Carnahan is able to cover up the limited budget for the most part.

It is only when the film occasionally steps outside the police station the low budget rears its head, with the use of cheap looking day for night photography being employed. Saying this, perhaps this was intentional, as this practice was majorly used throughout the 1970’s and Carnahan decided to follow suit. However, I highly doubt it.

The musical score by Clinto Shorter compensates for the film’s low budget trappings, with it being a fine accompaniment to the action. Shorter previously did the score for Carnahan’s Boss Level but his work here is very different being very Lalo Schifrin-esque, which is probably why the use of the Magnum Force score fits so well as the feel very similar.

Fans of hardboiled crime thrillers will get a lot of enjoyment from Copshop, and although it isn’t as impressive as Grillo and Carnahan’s last collaboration they still show they are an excellent team. I look forward to whatever they have coming next.