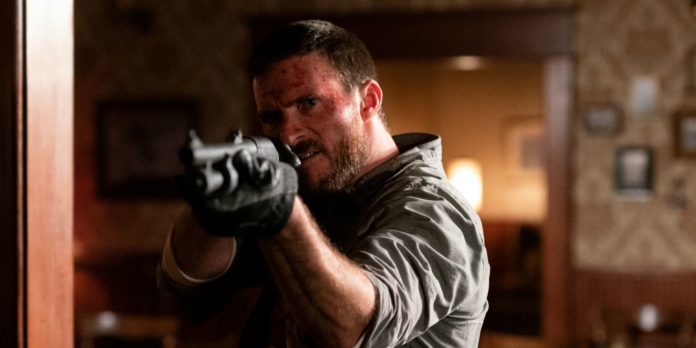 While David Hackl is probably still best known for helming horror sequel Saw V (2008) he has been steadily churning out the odd action thriller for the past number of years, with the likes of Beyond the Grizzly Maze (2015) and Life on the Line (2015) being much better than I expected.

More recently he directed the lackluster Daughter of the Wolf (2019), a somewhat lacking Gina Carano vehicle that had some terrific elements but didn’t come together to make a satisfying whole.

The trailer for his latest venture Dangerous certainly looked to be an improvement, featuring a cast filled with up and comers and fan favorites. As well as having Scott Eastwood in the lead, it features performances from Famke Janssen, Kevin Durand as well as action legend Mel Gibson.

With that kind of pedigree I was certainly hopeful, but other than a dedicated lead performance from Eastwood, Dangerous is mostly a failure with it’s low production values and poorly shot action scenes seriously hampering the film throughout the majority of it’s running time.

Scott Eastwood plays the damaged Dylan Forrester, an ex soldier who suffers from antisocial personality disorder. After the untimely death of his brother, Dylan travels to a mysterious island where his brother and family had set up home. It is clear from his arrival that his brother’s death was no accident although no one, especially his battle axe of a mother (Brenda Bazinet), is willing to listen.

When an FBI bulletin comes through for Dylan’s arrest he is locked up by the local Sheriff (Tyrese Gibson), who is awaiting an FBI team to come and collect him. Unfortunately, instead of the expected FBI agents the Sheriff and the rest of the Island inhabitants are met by a team of bloodthirsty mercenaries led by Dylan’s former Boss (Keven Durand). While everyone expects they are there for Dylan it quickly becomes apparent that his brother had some skeletons in his closet with the mercenaries looking for something more elusive.

Things admittedly get off to an interesting start, with the audience being shown the mundanity of Dylan’s life, with him going through the motions day after day in order to keep his “demons” at bay. It was slightly reminiscent of Bob Odenkirk in Nobody (2021), where we are shown the repetitious nature of his day in order to show how seemingly pointless his life has become.

Sadly, as Eastwood moves on and travels to where his brother’s funeral is being held the film becomes more generic and never really recovers. As well as being shot with no discernible style, which isn’t helped by its overly cheap digital look, the film is seriously hampered by its roster of unlikable and annoying characters courtesy of Christopher Borrelli’s script. It is bad when the only likeable character is the one with homicidal tendencies.

Other than Gibson’s enjoyably stressed out shrink, I couldn’t care less about any of the supporting characters in the film. It’s not that the performers are bad, more to do with the material they are given. For the most part I was wishing the villains would just put them (or me) out  of their misery.

This is especially true of Dylan’s mother who gives him such a hard time during the film that I found it difficult to even care what would happen to her. Sure, I understand her son has mental health issues which can be difficult, but to treat him like garbage for most of the film’s running time was just too much.

It’s a shame that Eastwood doesn’t have better characters to play off against, as his character is quite an interesting one and far removed from the typical hero a film like Dangerous would normally have. Eastwood is dedicated to the role, giving Dylan a strange other worldliness, with him unable to fully understand those around him.

One standout scene has him practicing in front of a mirror how to act like a normal human being with him even having instructions written on cue cards. Even later when told his mum is upset about his brother’s death he wonders why, as it happened days before. If only the rest of the film matched these scenes we could have been on to a winner.

I certainly thought after his notable lead role in The Outpost (2019) and his villainous turn in Wrath of Man (2021) that Eastwood would be moving onto bigger and better things but clearly Dangerous is not it, feeling like a step back in his path to A list status.

As commented upon, Gibson is fun as Dylan’s stressed out shrink, but his role is mostly an extended cameo. Action fans will be especially annoyed that he doesn’t get involved in any of the film’s set pieces, with his performance being all dialogue based.

Gibson’s scenes are interspersed through the entire film but his entire screen time probably only amounts to around 10 minutes. In fact, I would be surprised if he spent more than a day on set, with him not sharing the screen with any of the principal cast other than a brief exchange between him and Famke Janssen.

Looking at Gibson’s upcoming schedule it would seem he has a great deal of films coming up, many being DTV features. I hope he won’t become like Bruce Willis and begin phoning it in just to receive his check. At least here he is still relatively engaged, even in what little screen time he has.

Like Gibson, Janssen also appears fleetingly with a great deal of her performance taking place in her car and talking on the phone to her partner. Similarly her role looks like it was shot over a brief period of time, no doubt in order to keep costs down.

Kevin Durand has shown countless times that he can be an imposing villain but his character here is extremely bland and one note. The talented performer is mostly relegated to barking orders until the finale where he at least gets a chance to square off against Eastwood, although this isn’t exactly the action packed payoff I was hoping for with the fight being poorly choreographed, especially in comparison to some of the quality fight scenes appearing in lesser productions to this.

To be honest, none of the film’s action scenes, be it of the fighting or shooting variety, set the pulses racing. As mentioned the fight scenes are lumbered with simple and poorly constructed choreography, with the shootouts not really being an improvement. At least the action is suitably violent although it utilizes my pet peeve of low budget productions, the dreaded digital gunfire.

I am not totally against the use of digital gunfire as long as it is incorporated well and in light of the recent tragedy on the set of Rust, it is clearly one of the ways forward in limiting these types of accidents. All I am asking for is to make it look better than it does here, as it can be done. Just look at Robert Rodriguez’s Once Upon a Time in Mexico (2003) for a lesson how to properly implement digital gunfire.

Perhaps I am being overly critical of Dangerous, as with many DTV films you should lower expectations. With lower production values at the filmmakers disposal there will be certain things that are out of bounds, but I still feel that talented filmmakers can turn this to their advantage. Just look at the quality work coming from the likes of Jesse V. Johnson, whose recent Hell Hath No Fury (2021) had less of a budget than Dangerous but surpasses it in almost every level.

With the cast in front of the camera I was really expecting (and hoping) more. Hopefully Eastwood will be able to overcome this setback and find something more suitable for his follow up feature.