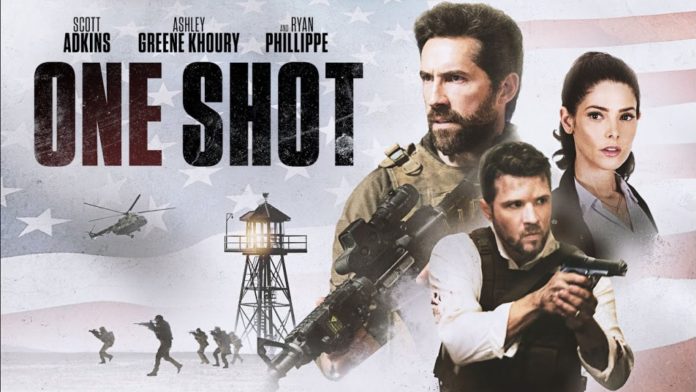 In comparison to previous years, 2021 has been a quiet year for Scott Adkins in terms of film releases. This doesn’t mean he has been lazing about as he has multiple films on the horizon. It is safe to say that his latest One Shot comes with some expectations, not just down to it being Adkins’ first release of the year but more to do with how the film has been shot.

Shot in one long continuous take (hence the name), One Shot makes up for what it lacks in plot and character with sheer bravura filmmaking, with it being on a technical level one of the more impressive action films of the year.

Adkins plays Jake Harris, leader of a Navy Seals team who are traveling to a hidden U.S. black site to transport supposed terrorist Amin Mansur (Waleed Algadi). Along for the ride is C.I.A. analyst Zoe (Ashley Greene Khoury) who suspects Mansur may have information on an upcoming terrorist attack in Washington D.C.

Upon arrival they are met with resentment by Yorke (Ryan Phillipe) who is in charge of the site. He doesn’t believe that Mansur should be removed from the site and feels that he and his men are the best in getting the information from him.

They aren’t given much time to discuss the matter before armed insurgents break through the site’s perimeter and start killing everyone in sight. Now it’s up to Harris and his team to hold off the oncoming wave of terrorists long enough for backup to arrive.

Director James Nunn has certainly surpassed any of his previous features, including his other two collaborations with Adkins, Green Street 3 (2013) and Eliminators (2016). As expected with any low budget action, there are some minor issues that sometimes get in the way but in no way do these detract from the overall enjoyment of what is on screen.

The one take action scene has become extremely popular with many films and television shows including them. The most recent example that comes to mind was in No Time to Die (2021) which had an extended shootout during its finale all seemingly done in one long continuous take.

But even before this action directors have realized the impact a one take action scene can provide. John Woo’s masterpiece Hard Boiled (1992) includes a five minute, one take, hospital set shootout that is still spoken of today. My personal favourites are included in Born to Fight (2004) and Vengeance of an Assassin (2014), both from director Panna Rittikrai.

As impressive as those mentioned are, the one take action scenes included only form a small part of the film. It is a massive undertaking for Nunn deciding to shoot his entire film in this way, where any one mistake on camera could derail everything that’s been shot.

Now obviously the entire film wasn’t all shot in one 90 minute period. Through some smart editing and blocking techniques Nunn has made the film appear to be one long continuous shot. For the most part he has carried this off. I would need to rewatch the film, but other than one obvious scene, I don’t remember any intrusive or apparent cuts.

I was certainly more impressed here than I was with Sam Mendes slightly overrated 1917 (2019), which admittedly was a gripping war film but was heralded by critics who seemed to overlook the obvious scene transitions. They must have been watching the film with cataracts so as not to notice them.

The one obvious scene that I mentioned isn’t even something the audience should be bothered about, as there would be no other way to carry out this sequence without cutting. I don’t want to say too much about it but you will know the scene when it appears.

As mentioned, there is the odd inclusion here that is prevalent of most DTV actioners. There is the inclusion of digital gunfire, but for the most part it is convincing and in no way compares to some poorer, recent examples. Dangerous (2021), I’m talking about you.

To be fair, without the inclusion of digital gunfire and explosions the film probably would not have been possible. Still even with some digital work, Nunn shoots some sequences where I am still unsure how he managed to pull them off. One scene has a character get shot on the side of the head, with the damage being shown through some convincing make up. With how the scene is shot and no apparent cutting, I don’t know how they were able to apply the actor with what is clearly a practical makeup effect.

Martial arts fans may come away slightly disappointed that the action focuses more on shootouts than hand to hand combat, but this isn’t to say that there aren’t any fight scenes, although they are somewhat shorter than previous Adkins’ movies. However, the fights are in line with the type of action involved, with Nunn favouring a more tactical approach to the firefights and fights. Of course, I’m not saying the film is overly realistic, at the end of the day we have Adkins taking on countless opponents but the film’s action is more grounded than some of his other films.

I am assuming that Nunn is a Metal Gear Solid fan, as many sequences have Adkins sneaking about corridors holding his gun and knife out in the same way as the games protagonist Solid Snake. I know Oscar Isaac has already been cast in the game’s film adaptation, but if for some unknown reason Isaac pulls out the producers need look no further than Adkins.

It helps that Nunn has a quality team working for him to create the action, with ace fight choreographer Tim Man and stunt coordinator Dan Styles both giving the film their all. Both have worked with Adkins and James Nunn previously, with them always bringing out the best in each other. One Shot is no different, and while they have had to slightly change up their action style to fit around how the film is shot, their work is still first rate.

Standout fight scenes are between Adkins and Lee Charles’ evil henchman Dhelkor as well as Adkins fight with main villain Jess Liaudin. Both are fast and brutal, with everyone involved getting a chance to show off their skills. Charles has acted alongside Adkins on several occasions in the likes of Accident Man (2018) and Avengement (2019), but his role in One Shot probably gives him the most screen time.

Now, there is a tendency for a film like One Shot to become repetitive. The recent Crazy Samurai Musashi (2020) was unable to overcome this issue, with the film being more of an interesting experiment than a proper action film. Nunn works hard here to make sure that doesn’t happen, although the setting on occasion does make this slightly difficult.

There’s no denying the confines of the supposed black site are quite drab, with the overall color scheme of the film adding to this. I must also add that while the black site is meant to be hidden somewhere in the U.S., it is clear the film was shot in the U.K. Still, these are minor quibbles, because as drab as the setting might be it isn’t long until Adkins is kicking someone’s ass around it.

Additionally impressive is the fact that the film was able to be made during Covid. I imagine the fact that it was all shot in one location made this an easier possibility, but even so, thumbs up to everyone involved.

Performance wise everyone is on point. The script doesn’t exactly give anyone the chance to delve deep into their characters, with the film taking place in real time, but other than the odd dodgy accent everyone brings their A game.

Adkins has certainly portrayed more memorable characters, but Jake Harris still has a lot of the badass characteristics we expect from an Adkins performance. While on paper it may seem like a straightforward role, it is important to remember that not only did Adkins have to act out his many pages of dialogue in long takes, but also take part in numerous elaborate action scenes.

The same is true of the rest of the cast. Ashley Greene Khoury does well as an analyst that is clearly out of her depth but doesn’t let this show, proving she is braver than some of her male counterparts.

I did expect Ryan Phillipe to appear more. While he may not instantly come to mind when thinking of action, he has in the past had his fair share of tough guy roles, most memorably in Christopher McQuarrie’s Way of the Gun (2000). I was hoping he would have got more involved in the action but at least he gives a better showing here than his last action vehicle, the underpar The 2nd (2020).

Waleed Elgadi is terrific as Mansur, with his true intentions not instantly being clear. He shows some genuine emotion and comes across as relatable, something that isn’t easy when playing a character of this type.

The villains of the piece don’t get as strong a showing although Jess Liaudin’s Hakim is an imposing presence and proves to be quite a tough adversary for our heroes to go up against. Notable support is provided by the aforementioned Lee Charles,  Emmanuel Imani and Terence Maynard as well as a host of others.

I have noticed online that One Shot already has some detractors, complaining about inconsistencies in the plot or some minor continuity errors, seemingly overlooking the amount of work and dedication that must have gone into One Shot to make it a possibility.

Some have complained about the truck during the opening only being able to hold 20 people although Adkins probably kills over 100, without thinking of the possibility that perhaps more soldiers have shown up once the truck has broken through the site’s gates. Because it’s not shown doesn’t mean it couldn’t happen, although some are seemingly unwilling to allow this reasoning.

One Shot may not be perfect, but for a pure adrenaline rush of action cinema it will take some beating. What’s more impressive is that it has done this on a fraction of the budget of some of this year’s supposed blockbusters.

Thankfully there is still more to come from Adkins, with him co-starring alongside action legend Dolph Lundgren in Castle Falls (2021) which is scheduled to be released soon. Additionally there is the little known action film John Wick Chapter 4 (2022), which will find him not only alongside Keanu Reeves but Donnie Yen once again.