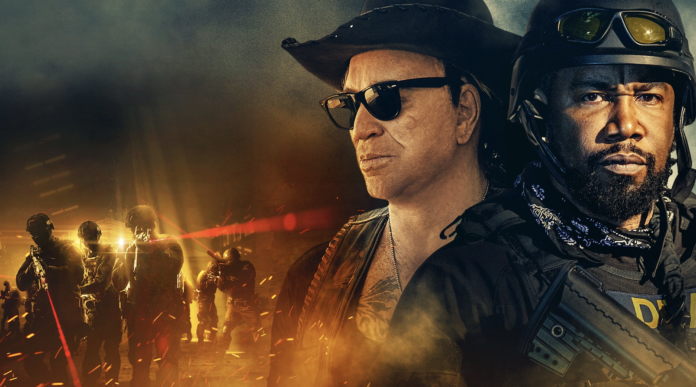 Even though his recent films have been somewhat beneath him, I still look forward to the latest Michael Jai White film. I have been a fan of the actor going back to Spawn (1997), and even when the film doesn’t turn out for the best, he can always be relied upon to give a good performance.

Here, he stars as James Baker, a DEA agent forced to take some leave after a botched operation results in a major case of PTSD. Baker doesn’t have much time to dwell on this though, as soon he finds himself having to deal with a group of home invaders led by recently released Con Johnny (Mickey Rourke) who are looking for money that was hidden in Baker’s home years before.

Now, I’m not expecting every subsequent film Jai White stars in to be the next Undisputed 2 (2006), but I still hope for at least some modicum of quality to shine through. His recent role in horror comedy Black Sunday (2021) was certainly a step in the right direction, so it was with some hope that I thought his latest The Commando would perhaps be another surprise.

Well, I can say that it was a surprise, but unfortunately not in the way I would have liked. Even overlooking the unfortunate title, The Commando is possibly Jai White’s worst starring vehicle to date, which is a shame, for as usual he gives a notable performance. Sadly he is let down by poor production values, a lackluster script as well as some serious laps in logic and continuity which all go together to make for a disappointing movie experience.

Firstly, someone should have a word with whoever thought it was a good idea to call the film The Commando. This title alone already brings up comparisons with the Arnold Schwarzenegger classic before the film has even started. What’s worse, it doesn’t seem that Jai White’s character is really a Commando. Instead he portrays a DEA agent currently on leave due to struggles with PTSD.

Maybe they mention something about him being a Commando at some point that I missed, as I can’t say that the events on screen held my attention. For an action film, there is a lot of filler included, clearly to stretch out what is already an overstretched story.

Koki Steven Sakai’s script is clearly built up around a home invasion scenario, but it takes it time to get to that point. In fact, this doesn’t really come into effect until the final third of the film. Before then we are treated to a bunch of unlikable characters acting extremely stupid.

Why in every film of this type do the criminals always decide to bring along a liability, someone who is either drunk, high or clearly insane. In The Commando’s case, all three come in the form of Gianni Capaldi’s unhinged Dominic, who basically screws up everything. Logically the thieves could actually have carried out their crime without anyone knowing they were even there. To state they want everything to go smoothly to only proceed to break into a crowded house and begin to rape and murder everyone just borders on ridiculousness.

Now, in an action movie, I can deal with over the top and even ridiculousness as long as the director is able to imbue proceedings with a sense of fun or style. Director Asif Ackbar brings neither. I am willing to cut him some slack as he was dealing with a considerably low budget as well as a tight schedule of only 11 days.

However, other directors have been able to overcome such obstacles and I can’t overlook the completely drab color palette and lack of any discernible visual style. Also, the quick filming schedule is made painfully obvious by the amount of poor continuity errors on show where it appears that Akbar was just glad to get things in the can rather than have any level of quality.

One such scene has a character being shot through the eye, which at first was admittedly impressive. I would have continued to be impressed if it didn’t seem that his eye socket was back intact in the next scene. Additionally there are a number of times when Jai White’s gun loses its silencer only to have it reappear then disappear again. These may seem minor to some but problems like this just take me out of a film.

At least, as mentioned, Akbar is able to get a quality performance from Michael Jai White, although those waiting for him to show off his martial arts moves will have a long wait. Ackbar doesn’t exactly fill his action film with much in the way of actual action, only unleashing Jai White in the final 20 minutes of the film.

Up until then, the majority of Jai White’s scenes have him either having flashbacks or struggling to re-integrate into everyday life. Admittedly he does well enough in these scenes, but Ackbar and screenwriter Sakai really overplay it. Clearly these were included more to stretch out the running time than truly relay the real struggles of PTSD.

Mickey Rourke’s screen time is quite brief, but for the most part he is suitably engaged and brings a sense of menace to his villainous character. During his opening scenes he even injects some genuine emotion that made me think he was going to be more than a typical villain. Sadly that’s not the case, but even so Rourke still does well with the limited screen time he is given. He is certainly better here than he has been in some of his more recent DTV efforts and the film could have probably done with more of him.

Smaller roles are filled out by the always likeable Jeff Fahey as the town’s corrupt Sheriff. Fahey certainly isn’t stretching himself here, with roughly ten minutes screen time in total. Still, he doesn’t embarrass himself and even if it is only 10 minutes, he is always welcome.

I must say I did have fun with Gianni Capaldi’s character. My fellow Scotsman certainly plays into the stereotype of being a “mental junkie”, but his scenes brought some form of light relief, even when doing some extremely reprehensible things. Maybe it was more the sound of his accent sounding so out of place but it did make me chuckle.

The only other standout of note was relative newcomer Noa Maes, who came across as believably distressed as Natalie, one of James’ daughters. Mia Terry’s Jennifer on the other hand is one of those annoying teenagers that always plague action movies. You know the type, the ones who are essentially assholes and cause everything bad to happen. To be honest, she elicited no sympathy in me whatsoever. This isn’t the actresse’s fault of course, as she is merely playing what’s on the written page. Still, it doesn’t make it any easier.

The small amount of action Ackbar includes is decently handled, but nothing greatly impresses. There is a brief shootout at the start which is mostly ruined by the poor inclusion of digital gunfire. I know I have complained about this countless times, but there are ways to at least make this look good. It helps when your actors actually look as if they are shooting a real gun, at least acting as if there is a recoil. Other than the principle cast members, most of the extras in the opening gunfight and in the finale are guilty of this.

After the small firefight at the start, the film slows down to a crawl, with the only other action scenes coming in the final third. There is a considerably short fight scene that is used to introduce UFC fighter Donald Cerrone’s Ray. It is clear he is only there to face off against Jai White in the finale, which does happen, but it isn’t exactly the lengthy bout I was expecting with their fight barely even registering in terms of screen time.

At least it was more impressive than Jai White’s expected face off against Rourke, which appears to have been filmed without the two actors even being in the same room. Other than one shot where you can see the two together in the same frame it is mostly filmed in close ups where it appears Jai White is acting alongside a stuntman.

I apologize if my review seems overly negative. Some may complain that I was expecting too much, but I didn’t enter into The Commando expecting an action masterpiece, but I did at least expect to be entertained. Other than a few notable points, the film is mostly a disappointment, on which I hope Michael Jai White quickly recovers from. Thankfully I can’t see this being a problem as he already has a number of interesting projects in the pipeline.