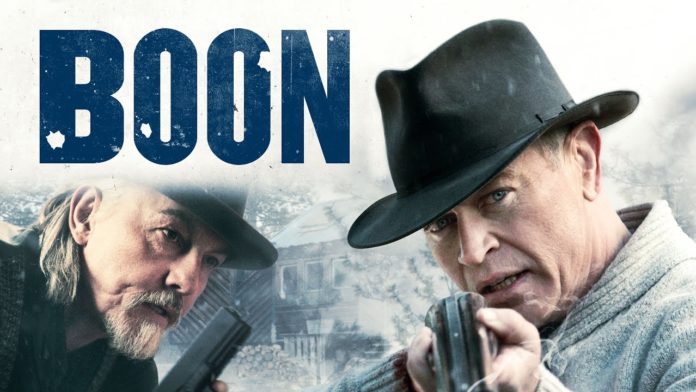 The trailer for Neal McDonough’s new starring vehicle Boon had me intrigued. For one it gave the perpetually underrated McDonough a rare leading role. Not only that, it appeared this time he would be the hero rather than the typical villain he is normally cast as.

Secondly, the setting and tone of the trailer made Boon look as if it was essentially a modern day Western. Being a lover of the Western I was certainly interested in seeing what the film had to offer.

To be honest, other than the trailer I knew pretty much nothing about Boon. Looking at the title I was hoping that it might be an update of the Michael Elphick show of the same name (which I guarantee only about 5% of those brought up in the UK during the 80’s even remember), although in hindsight maybe that is for the best as to be brutally honest that show was terrible.

It turns out that Boon is actually a sequel to last year’s Red Stone (2021). As that film was already on my radar I thought it would be best watching that before delving into Boon. While Red Stone wasn’t entirely successful, with its slow pace almost derailing the film it did feature a terrific turn from McDonough as the morally conflicted hitman Nick Boon.

Still, other than a terrific lead performance I couldn’t really see anything in Red Stone that would warrant a sequel. Even so, I went into this film with an open mind, hoping that it would be an improvement of what came before, and I am happy to say that it is.

Whilst Boon still has some issues, as like its predecessor has some problems with its pace, it overall makes for a more pleasurable experience with it once again giving the brilliant McDonough a real chance to shine.

The finale of Red Stone may have made a sequel an uncertainty, with Nick’s ultimate fate being unclear. Boon begins with him living in a remote part of the Pacific Northwest, trying to keep a low profile. After being injured in a violent confrontation he is saved by female Preacher Catherine (Christiane Seidel) who lives nearby with her son Elijah (Jake Melrose).

It quickly becomes apparent that something is wrong, with Catherine fearful of local crime lord Mr Fitzgerald (Tommy Flanagan), who along with his cold hearted daughter-in-law Emilia (Christina Ochoa) are building a tunnel on Catherine’s land. Catherine at first is willing to turn a blind eye but after some of Fitzgerald’s men begin to threaten her she has to turn to Nick for help, with him having to resort to the deadly skills that he was hoping to leave behind.

The film brings back writer/director Derek Presley who has seriously upped his game since Red Stone. This is without a doubt his best work to date. Being a low budget production Boon still has some problems that Presley is unfortunately unable to overcome.

There is a slightly cheap look to the production which is probably due to being shot digitally. However the beautiful locations somewhat make up for this and a level of production value to proceedings. The snowy mountains of the Pacific Northwest are certainly a great backdrop and a perfect setting for the action.

The budget limitations are mostly evident during said action scenes with the inclusion of some really poor looking digital blood and gunfire. Saying that, there are still some decent practical effects during these scenes which was welcome.

When it comes to the action, Boon is never going to be a game changer. It is competently staged, but it would seem that Presley favours a more grounded approach when it comes to the shootouts. McDonough’s Nick never does anything that is outside the realism of possibility.

This isn’t a real issue as Boon would never be considered a full on action movie, taking its time building to the action. Saying that, it clearly has more than the previous film with the final standoff being a standout, being heavily reminiscent of classic westerns.

With it taking its time to get to the action, this means that there are some slight pacing issues but these aren’t on par with Red Stone. This is partly to do with Boon having a more enjoyable roster of characters that we actually don’t mind spending time with. There is also the subtle inclusion of romance which was solely absent from the first movie. These elements may seem trivial but they are enough to make this film a more rewarding experience.

Unlike Red Stone, McDonough had a hand in the writing of Boon working with Presley as co-writer. Clearly this is a character close to McDonough’s heart, with a lot of his own views on religion and the world in general infusing the character of Nick Boon. The fact Nick Boon is a Catholic plays an important part in the film. That’s not to say that when the time comes he’s not willing to kick ass.

As expected, McDonough is terrific in the role, giving it his all. Even with the mentioned issues stopping Boon from being a total success, McDonough’s performance alone makes it worthwhile. Anyone that is a fan of McDonough will be happy to see him being the main focus of a film and will hope for it to continue.

My only real gripe with his character is the amount of times he gets injured throughout the film. Now, perhaps McDonough and Presley included this to make it appear more realistic, but considering Nick is meant to be the best at what he does, he appears to get injured a lot.

You can make or break a Western depending on who’s the villain. Thankfully Boon has a great one in the form of Tommy Flanagan. His Scottish drawl alone makes him memorable, but he gets some great one liners too that overshadows the previous films’ Michael Cudlitz, who carried out villain duties that time round. Sure, Flanagan isn’t exactly stretching himself here but he is always great value.

As much of a scumbag as Flanagan’s Mr. Fitzgerald is, Christina Ochoa’s Emilia makes him look like a choirboy. Totally lacking in conscience, Emilia would rather just kill those who get in her and her father-in-law’s way. She is the real villain of the piece and it is her that McDonough ends up having to deal with towards the finale, with Ochoa really putting McDonough through his paces.

With Ochoa being such a memorable villain, Christiane Seidel’s Catherine sadly pales in comparison. She still does well in the role and I was glad that she didn’t become the typical damsel in distress, with her proving herself to be quite tough.

Demetrius Grosse makes a welcome appearance as the FBI agent hot on Nick’s trails, and makes for quite an imposing figure even if ultimately he isn’t given a great deal to do. I mostly knew Grosse from the series Banshee (2013), so I was hoping he would at least get in on more of the action.

Now, I’m not going to lie and say that Boon is a must see. If you are a fan of Westerns (like myself) I would definitely say that it’s worth checking out, but don’t go in expecting a masterpiece. However, I have noted some online giving it 1 star reviews which is ridiculous.

I am definitely interested in seeing where McDonough and Presley take the character next, as there has already been talk of a third entry in the series although I assume this is dependent on whether Boon is a success.

As well as this, McDonough has a number of features due one of which finds him once again in the Western genre, this time starring in a sequel to his earlier movie The Warrant (2020). I know the first film will never go down in the pantheon of classic Westerns, but as there are less made these days I will take what I can get and The Warrant had enough plus points to make me look forward to a sequel.