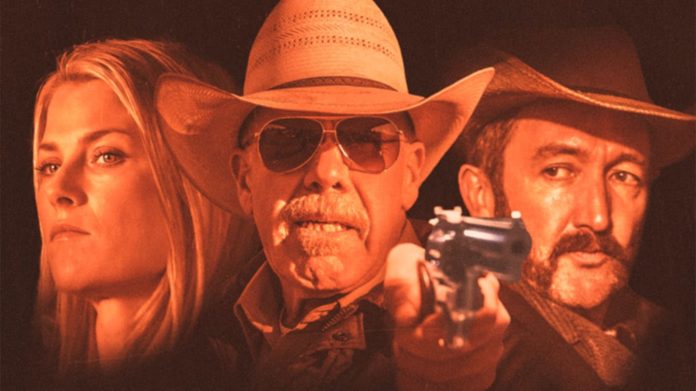 The upcoming The Last Victim is being sold as a Neo Western, although it basically boils down to a straightforward survival thriller, with the Western elements mainly coming from the setting and the fact that some of the characters wear Cowboy hats.

Making his directorial debut, Naveen A Chathapuram manages to get good performances from his cast and includes a good amount of tense sequences that are ultimately let down by a slow pace and an overlong run time. Although it only clocks in at 1 hour and 43 minutes, it could have done with some tightening up round the middle section.

This is a shame as Chathapuram kicks things off to a great start, with a violent confrontation in a Diner involving crazed criminal Jake (Ralph Ineson), where he ends up killing three people. Well shot by cinematographer Lukasz Pruchnik, the scene is dripping with atmosphere and tension, with the silent roadside Diner erupting into bloody violence.

Unfortunately, the film isn’t able to sustain this level of tension, with it being bogged down in more dramatic scenes. Clearly intended to create depth to the characters, which they do to an extent, they still don’t help the overall flow of the film and slow down the film’s momentum. It is meant to be a thriller after all.

After killing those in the Diner, Jake decides to take the bodies with him, his thinking being that the authorities won’t be able to prove they were murdered if there are no bodies. Along with his gang he travels into the backwoods of the American Southwest to dump the bodies. Unbeknownst to them is that Susan (Ali Larter) and her husband Richard (Tahmoh Penikett) are also there enjoying their holidays. After a violent confrontation, Susan is on her own in the wilderness, hunted by Jake and his gang.

While she is being hunted, a world-weary Sheriff (Ron Perlman) starts looking into the case and is soon hot on the trail of Jake and his gang, although he may not be quick enough to stop Jake catching up with Susan.

For a first-time effort, Chathapuram should be commended for at least turning in an interesting movie, even if it isn’t the overall success that it could have been. Him and cinematographer Pruchnik manage to fill the film with some memorable visuals, with a late in the day sequence where Susan is given Peyote allowing for some hallucinatory images. The stunning location photography also adds to the production immeasurably and makes for a great setting for the action when it comes.

The handful of these more action orientated scenes are capably handled, with everything being in the realm of possibility. Like most DTV movies there is the inclusion of some digital blood which does detract from the overall impact. Still, there is one particularly brutal scene that surprised me how far it went which utilizes more practical effects.

Working from an original idea from Chathapuram and Doc Davis, Ashley James Louis’ script attempts to give the main character some depth, with Susan suffering from Obsessive Compulsive Disorder (OCD).

Ali Larter does well in her role, realistically conveying her struggles with having to deal with her disorder, with part of her condition being that her character has list everything she plans to do throughout the day. OCD is an interesting angle to take with the lead character however once Susan finds herself in jeopardy her OCD is kind of left by the wayside, only briefly showing up again later in the film.

Larter proves herself to be quite tough when the time comes, with her character taking out Jake’s gang single handedly. I liked how these scenes were lacking in style or finesse. Larter isn’t some ex Navy Seal. She is just a normal person in extraordinary circumstances, although she does seem quite knowledgeable about killing which is addressed later in the film.

Ralph Ineson is probably best know recently for his role in Robin Egger’s The Witch (2015), but he has had a plethora of roles dating way back to the early 90’s, ranging from the likes of The Office (2001) to Game of Thrones (2011).

Ineson has proven countless times he can portray a memorable villain, and his performance as Jake is no different even if his attempts at an American accent leaves a lot to be desired.

Unlike Larter’s Susan, we don’t really get to know much more about Jake other than his proclivities for violence. We don’t get any insight into his background, he’s pretty much this way as this is what the plot needs to move forward. Still Ineson is able to inject more character into what was on the written page, something he has done on numerous occasions.

Out of the main cast, Ron Perlman gets the least amount of screen time. Even in his limited role Perlman still lights up the screen, with the script even including a handful of scenes that at least make his character appear more three dimensional, well at least in comparison to the other supporting roles that make up the cast.

In these supporting roles, the likes of Tahmoh Penikett, Camille Legg and Kyle Schmid all do decent work but never get to do much to make an impression. The only real standout from them is Dakota Daulby, who manages to impress as the seemingly weak Tad.

With a bit tighter editing or some more action The Last Victim could have been a real winner. As it is, there isn’t enough here to make it a must see, but if viewers were to stumble across it there are enough thrills to at least make it worth their time.