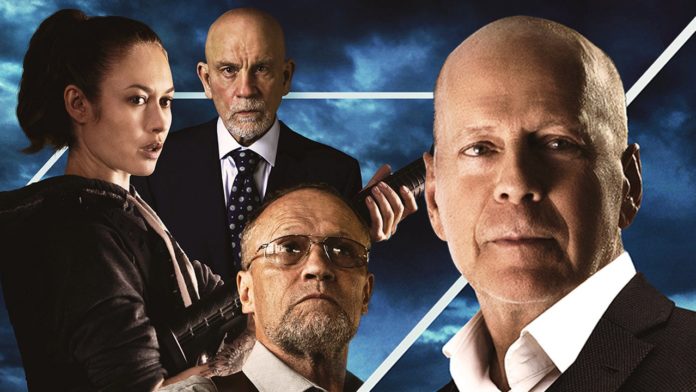 After spending time back in WW2 with his Hell Hath No Fury (2021), director Jesse V. Johnson comes back into modern times with his latest, crime thriller White Elephant. With some minor issues that stops it from becoming one of Johnson’s top tier pieces of work, he still includes enough of what fans have come to expect from his work to still make White Elephant a satisfying experience.

In comparison to Johnson’s previous output, this film reminded me more of his earlier films Charlie Valentine (2009) and The Butcher (2009) than the martial arts actioners he has made with superstar Scott Adkins. Like those earlier films, the assorted characters mostly all work outside the law with no one being 100% clean.

Like The Butcher, Johnson also wrote the script, here writing alongside Erik Martinez. Similarly to that film, White Elephant also focuses on a Mob Enforcer who has a change of heart. This time round the story focuses on Gabriel Tancredi (Michael Rooker), an ex-marine in the employ of crime boss Arnold Solomon (Bruce Willis). After an assassination attempt is witnessed by two cops during a stakeout, Tancredi is ordered to make them disappear.

During his mission Tancredi has a change of heart and decides to assist Vanessa (Olga Kurylenko), one of the cops he has been assigned to take out. Now the two must work together if they are to survive against Solomon’s army of gangsters. Amongst them is Tancredi’s protege Carlos (Vadhir Derbez), who is itching to prove himself as being the better killer and take the place of his teacher.

White Elephant features one of the highest profile casts to headline a Johnson feature. While his previous ventures have certainly had no shortage of screen talent with the likes of Scott Adkins, Louis Mandylor and Dominiquie Vandenberg all featuring regularly in his productions.

As terrific as they are, you can’t deny Michael Rooker, John Malkovich and Bruce Willis bring proceedings a certain star quality which will probably go in some way in making White Elephant’s release more high profile than some of Johnson’s previous movies.

Far too often Michael Rooker is relegated to supporting roles, so it’s great to see him front and centre as the film’s lead. Tancredi could never be considered a hero, with him being involved in some abhorrent business on behalf of his boss. Johnson certainly doesn’t baulk at showing the more gruesome aspects of Tancredi’s job, with one memorable scene involving him and his protege dismembering one of their victims.

The only thing that makes Tancredi different to those he works alongside is he has something in the way of a moral code, but even then its buried deep beneath the surface, so much so that he is initially complacent in murdering Kurylenko’s Vanessa. Only a change of heart later in the day puts them both on the same side.

It’s no surprise that Rooker is great in the lead, being every bit the bad ass I expected him to be. Even at the age of 67, Rooker throws himself right into the action and is one hundred percent convincing as a killing machine.

As great as he is in the action scenes it is in the film’s quieter moments that Rooker shines, showing a character coming to terms with the bad decisions he has made in life and wanting to even do a little bit of good before he reaches the end.

While Rooker is essentially the lead, co-star Olga Kurylenko still gets a fair share of screen time, being the closest the film has to a clear cut hero. Kurylenko does well, although I did find it a bit hard to believe her as being a hardened soldier, with her model looks shining through. Still, there’s not much she can do about that, and even so she still gives the film’s action scenes her all. She clearly impressed Johnson enough as she is scheduled to portray the legendary Boudicca in his upcoming biopic.

With Willis’ recently reported health issues, White Elephant marks one of his last roles before his retirement. Although he is ostensibly the film’s main villain, he only really appears in a handful of scenes which most of the time find him sitting down. Only one scene, an attempt on his life finds him springing into action, harkening back to his action legend past.

Apparently due to Willis’ ongoing battle with aphasia the filmmakers were forced to bring Willis scenes forward in order for him to complete them. Even then, it’s obvious that during these scenes that parts of his dialogue are provided by a sound alike although this is kept to a minimum to not be too jarring.

Adding a bit of gravitas to proceedings is John Malkovich. Only appearing in roughly 3 scenes, Malkovich still manages to make an impression, being one of the only people that Rookers Tancredi doesn’t have to face off against.

Outside the headliners, Vadhir Derbez makes an impression as the cocky Carlos. He does come off as somewhat annoying but that is clearly intentional, with Carlos being the kind of character you just can’t wait to see being put in his place.

As expected from Johnson, White Elephant contains a number of quality action scenes, with the majority of them focusing on violent gunplay. Regular Johnson collaborator Luke Lafontaine is on hand once again to choreograph the carnage, as he has done on so many of Johnson’s previous movies with the likes of The Beautiful One (2017) and The Debt Collector (2018) amongst them.

There are numerous standout action scenes, the most memorable being a restaurant based fight where Rooker and Derbez go to carry out a hit and the bullet strewn climax that takes place throughout Rooker’s country home.

Like Johnson’s previous work, there is no shortage of blood and gore. I am always thankful that Johnson typically favours practical effects in his action scenes over the overused digital blood prevalent in other DTV fare. Unfortunately White Elephant does feature the odd bit of obtrusive digital blood but thankfully it’s kept to a minimum, with Johnson’s trademark use of old school blood effects still featuring heavily.

The on screen action (and dramatics) are given even more impact due to the excellent musical score from ace composer Sean Murray. Like his previous work for Johnson, it rises the film above similar fare and just adds another degree of class. Like his score for Avengement (2019), it is heavily reminiscent of the work of Ennio Morricone and a perfect accompaniment to the on screen carnage.

I have already seen some poor reviews for White Elephant online. I would suggest for you to make up your own mind. Any fan of Johnson’s work should know by this point in his career what to expect. White Elephant will never change the world but other than a few issues it is still a typically well made action thriller that contains enough bang for your buck to keep you entertained.