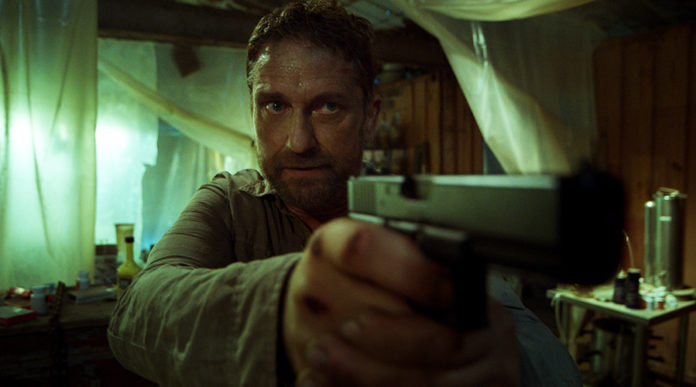 Having seemingly relished his turn as the bad guy in Joe Carnahan’s Cop Shop (2021), Gerard Butler finds himself back in hero mode once more for his latest thriller Last Seen Alive.

Coming from What Doesn’t Kill You (2008) director Brian Goodman, Last Seen Alive is a much smaller scale thriller than typical Gerard Butler features. Playing like an updated version of Jonathan Mostow’s Breakdown (1997), Butler stars as Will Spann, a real estate developer  who is traveling with his estranged wife Lisa (Jaimie Alexander). They are traveling to Lisa’s parents as she has decided to take a time out on their marriage to clear her head.

On the way they have to stop at a gas station. Whilst Will is refueling Lisa mysteriously disappears. With no idea what has happened and the authorities suspecting him to be involved in his wife’s disappearance, Will has no choice but to begin searching for Lisa himself, with him preparing to go to any lengths in order to find his wife.

Unlike other Butler films, there doesn’t seem to be much hype or fanfare surrounding the release of Last Seen Alive. Upon viewing the film, the reasoning behind this became plainly obvious as this is one of Butler’s poorest starring vehicles in some time and the first of his films that looks like it was intended for the DTV market.

Clearly made on a low budget, Last Seen Alive employs some extremely ugly and cheap camera work throughout the majority of its running time. In some instances, this shooting style can give proceedings a somewhat gritty look and feel, working best during the more tense moments in the film. Even so, this is the kind of camera work you would expect on a no name indie film rather than the latest Gerard Butler starring vehicle.

Regarding Butler, he is great in the lead role, with him getting a chance to show off his more vulnerable side, something his larger scale actioners don’t always allow. I liked that he decided to use his Scottish accent (well as Scottish as it is these days), which also separated his character from the all American heroes he’s used to playing.

As vulnerable and disorientated as Will is during the film, fans shouldn’t fret as he still hones into his bad ass tendencies when the need arises. Although, it would seem that his designated skills this time don’t come from Special Forces training, rather more to do with him just being Scottish.

Butler is ably supported by Russel Hornsby as Detective Paterson, the one cop who may be on Will’s side. Of the main supporting cast he is the only cast member that gets a reasonable amount of screen time. At first being skeptical of Will, he slowly begins to realize what is going on and shows how his character is willing to bend the rules as long as it is justified.

Jaimie Alexander doesn’t get a great deal of screen time, and even when she is on screen it is hard to feel sympathy for Lisa. Even during the flashbacks that are included, Lisa comes across as incredibly unsympathetic, so much so I was actually expecting a late minute twist that she was perhaps involved in her own abduction, which personally would have been more interesting than what we are ultimately given.

I must give a shout out to the underrated Ethan Embry who is excellent as an old friend of Lisa’s who may or may not be involved in her disappearance. Embry manages to do a lot with such a small role that it would have been great if he had more screen time.

Unfortunately, Marc Frydman’s script is extremely generic. There are no surprises here, with the plot developing exactly as expected. It does at least give Butler some decent material to play with, and I did appreciate the smaller scale story. It’s nice to see an action film where the motivation is more personal and doesn’t focus on our hero trying to save the world.

The script does take its time to get going, with it taking its time to get to the action. Now I normally don’t mind this as it gives the audience a chance to get to know the characters. The issue here is more to do with by the time we finally get to the action, there isn’t much screen time left. Worse still is that the film runs out of steam just as it seems to be building to something more. I actually heard myself at the finale saying out loud “is that it?”

Marc Frydman had previously written Goodman’s Black Butterfly (2017), which like Last Seen Alive has some good performances but is ultimately let down by it’s finale.

Before the damp squib of an ending, Goodman at least treats us to some decent action. Now there’s nothing here we haven’t seen before but I did appreciate that he takes a more grounded approach to the fights and shootouts which is fitting with the types of characters involved in the plot.

It wouldn’t make sense for Butler’s character all of a sudden to be a crack shot and coming out with martial arts moves. When he does get involved in any fights they are suitably brutal with a lot of grappling and sloppy punches being thrown.

The standouts are a fight between Butler and Ethan Embry, with the two of them throwing each other around Embry’s trailer. The other is a shootout inside a meth lab where Butler has tracked the kidnappers of his wife. If there were more scenes like this I think we could have been on to a winner rather than just an enjoyable time waster most will struggle to remember the following week.

I’m unclear on what would have attracted Butler to Last Seen Alive. Perhaps it was the chance to play a more everyman hero, or the fact he had a chance to get to show off his dramatic chops. It’s just a shame that these qualities couldn’t have been shown in a better movie.

Ultimately Last Seen Alive is still worth a watch, especially if you are a Gerard Butler fan. Still, I would suggest a rental rather than a purchase as there is nothing here that would make you want to revisit it.