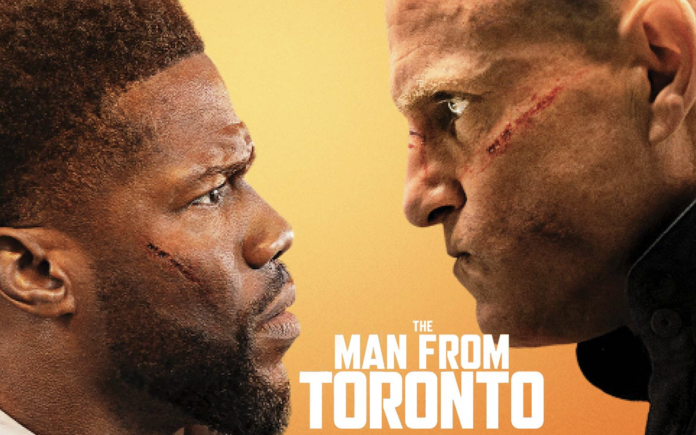 Having turned recently to more dramatic fare in Fatherhood (2021) and True Story (2021), Kevin Hart is back in comedy mode for his latest, comedy actioner The Man from Toronto.  Similarly to his previous hits like Ride Along (2016) or Central Intelligence (2016), The Man from Toronto is another buddy movie, where Hart is the overbearing funny man teaming up with a bemused straight man, in this instance played by Woody Harrelson.

To soften the blow of telling his wife Lori (Jasmine Mathews), Teddy decides to treat her for her birthday, taking her to a luxury spa where she is to be pampered for the next couple of hours. While she is enjoying herself Teddy drives to a secluded cabin to get the rest of her birthday treat prepared. Unfortunately the printer he has used for the location was faulty, with Teddy arriving at the wrong cabin.

As Teddy enters the cabin he meets with a man who mistakes him for the legendary “Man from Toronto” (Woody Harrelson). As the man has never met the real “Man from Toronto” he expects Teddy to interrogate a man he has held prisoner. Surprisingly Teddy is able to extract the required information, only for the FBI to quickly raid the cabin.

The FBI manage to convince Teddy to keep up the pretence that he is the “Man from Toronto” in order to capture an exiled Venezuelan Colonel. The Colonel is planning to carry out an assassination attempt on the President of Venezuela, so the mission is somewhat time sensitive. Things seem to be going okay until the real “Man from Toronto” shows up and puts the spanner in the works.

The Man from Toronto is exactly the film I expected it to be, with it being an overall enjoyable watch but not something that I will probably find myself revisiting. It is similar to many other Netflix releases, with it missing a number of elements that would make it a truly memorable action movie.

It doesn’t help that the filmmakers decided to make the movie PG-13, which not only impacts the effectiveness of the comedy but dilutes the otherwise well shot action. Ironically, the decision to shoot the film for a PG-13 rating doesn’t seem to matter now with the film ending up debuting on Netflix where the age rating has less impact.

What makes this decision worse is that this was one of the main reasons original star Jason Statham left the project, with him eventually being replaced by Woody Harrelson in the titular role. To be fair, Harrelson is terrific in the role and certainly holds his own in the action scenes.

Whilst it is interesting to think what Statham would have brought to the fight scenes, Harrelson is certainly no slouch, and to be honest, as much as I love Statham, Harrelson is clearly the better actor. Obviously he is assisted by his stunt double but Harrelson seemingly does a lot of the action himself. The best of his fight scenes are the Cargo plane fight where he has to take on a gang of mercenaries whilst at the same time deal with Hart making things worse by tipping the plane backwards.

The lengthy finale also has him taking on numerous adversaries throughout a gym, with Harrelson and Hart utilizing every bit of training equipment they can to defeat their opponents.

My only issue with Harrelson’s role is that he doesn’t get to shake things up. He is the tough guy the whole way through, playing the straight man to Hart’s well meaning buffoon. Considering the amount of times Harrelson has shown what an accomplished comedy actor he can be, it would be nice to see him given something actually funny to do rather than just be Hart’s straight man.

When it comes to Hart, I must admit that I am starting to grow tired of his comedy schtick. It’s not that he isn’t a talented performer, but the character of Teddy isn’t much different from the majority of other Hart roles, especially those he has portrayed in his other action comedies. It doesn’t help that the age rating seriously curtails what Hart is allowed to do, with him never getting a real chance to break loose.

What makes it doubly disappointing as only recently have we seen Hart stretch himself as an actor in the previously mentioned Fatherhood, with him bringing genuine heart to his performance, something that is sadly lacking here. For the majority of the film it feels like Hart is just going through the motions.

The remainder of the cast don’t really get a great deal to do, with Jasmine Matthews doing what she can with her limited screen time as Teddy’s supportive wife. Kaley Cuoco has even less screen time than Matthews, with her character only appearing briefly in a handful of scenes. Her character’s inclusion is supposedly to be as a love interest for Harrelson, but considering they only share one scene (excluding the final scene of the movie) this sub plot goes nowhere.

The only other character of note is Ellen Barkin as Toronto’s handler, with her gleefully chewing up the scenery in what little screen time that she has.

Patrick Hughes seems like an obvious choice to direct, with The Man from Toronto having a very similar vibe to his previous movie The Hitman’s Bodyguard (2017) and its sequel. He once again shows a talent for action, with him having a firm grip on the fight scenes and shootouts. As mentioned, the best of these is the extended finale which Hughes decides to film in one seemingly long take (even if the cuts are obvious). I especially liked that MMA legend Oleg Taktarov showed up even if he was somewhat underused.

Like Hughes’ previous movies he also keeps things moving at a fair pace, with there being a fair mix between the comedy and action, although it must be said the action works better than the comedy. As mentioned, the decision to make this PG-13 does certainly affect the action, but Hughes manages to push the violence as far as he can considering the age rating.

In fact, it isn’t just the age rating that impacts the action but more to do with The Man from Toronto including some of the worst CGI effects work I have seen in a mainstream production in the last decade. Now, Hughes should be used to poor CGI having worked for Millennium Films, but even compared to them these are terrible and makes me wonder where the budget went.

Now I know that this was a Sony production, but it appears that once Netflix acquired the rights that what was spent on the post production was seriously lowered. For a $75 million production The Man from Toronto looks extremely cheap. Gone are the days when a company like Europacorp could make a terrific looking action film like Taken (2008) on a budget of $25 million.

The Man from Toronto is the kind of movie you would put on if you just want a quick action fix. Netflix is probably the best place for it, as I think viewers would be less forgiving of its drawbacks if they viewed it in the theater. Ultimately it would seem that Jason Statham stepping this one aside was the right choice.