SYNOPSIS: Former MMA champion Case Walker (Michael Jai White) has kept a low profile, winning small-time regional matches after refusing to join the powerful new leagues that push performance- enhancing drugs on their fighters. Walker is convinced by old friend and renowned fighter Brody James (Josh Barnett) to join him in Thailand and train him for a big fight against the undefeated and deadly Caesar Braga (Nathan Jones). During training, Brody is injured. Under pressure from an unscrupulous, high-powered promoter (Esai Morales), Walker agrees to replace James and fight his toughest opponent yet — but only on his own terms.

UPDATE: MICHAEL JAI WHITE announced (via his Instagram) the release date for NEVER BACK DOWN 3: NO SURRENDER for June 7th along with other cast members below!

UPDATE: Looks like TONY JAA will be making an appearance in the film after all (according to MJW’s Official Facebook page)! 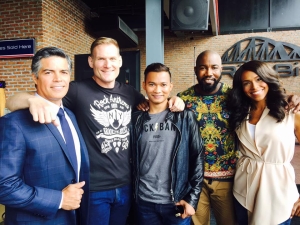 On set today, knocking out a few scenes with some of the awesome cast of Never Back Down 3: Esai Morales, Josh Barnett,… 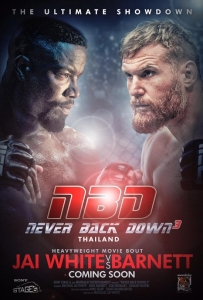 Do you guys like the UFC inspired poster design? “Jai White vs Barnett”. I dig that.

UPDATE: Currently filming in Thailand, NEVER BACK DOWN 3 have added another “huge” star to the mix! ‘Mad Max: Fury Road’ villain NATHAN JONES have joined the cast! 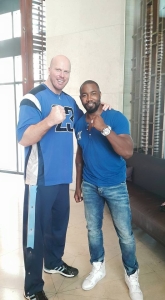 Thai martial arts star JEEJA YANIN (Chocolate) will be following the footsteps of TONY JAA as she will be making her Hollywood debut in NEVER BACK DOWN 3 with MICHAEL JAI WHITE!

Yanin confirmed this via her Official Facebook Page by posting a photo of her and White (above) with the caption: “Getting ready for the shoot of Never Back Down 3 with the amazing Michael Jai White. My first International film.”

White spoke a bit about the upcoming film to NukeTheFridge.com stating that he will be directing the film himself and that “by the end of the second movie, you see that my character has gotten an invitation to get back into the ring and to compete for the MMA crown. So this is that character embarking on that challenge.”

White added that “Tony Jaa’s going to make an appearance and also Jeeja [Yanin] is going to be in it. Also I’ll be joined by Josh Barnett who is the most celebrated heavyweight MMA champion ever. There’ll be some fights between Josh and I.”

However, Jaa confirmed via his Official Facebook Page that he will NOT be appearing in the film:

But you never know, Jaa might just be trying to keep mum on a cameo appearance in the film.

White also confirmed that BLOOD AND BONE 2 is in the works and a script have been completed. He believe the sequel will outdo the original in the action department “because the character’s no longer undercover. In Blood and Bone he was undercover. You didn’t quite know what his plan was and it was kind of a mystery until it unfolded. I believe the action will be far better in the sequel.” 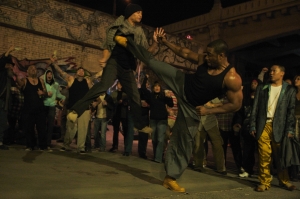 Stay tuned for details on both projects!