UPDATE: Check out the latest poster and “Surf Action” featurette below! 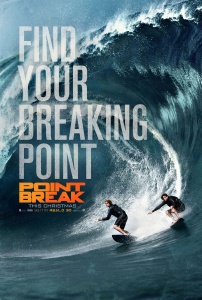 The remake of director Kathryn Bigelow’s 1991 classic POINT BREAK have release its first trailer and they have definitely ramped up the extreme sports concept to a whole new level!

Filling in the roles that made original stars Keanu Reeves and Patrick Swayze famous are LUKE BRACEY (The November Man) as FBI agent ‘Johnny Utah’ and EDGAR RAMIREZ (Wrath Of The Titans) as the thrill-seeking criminal ‘Bodhi’. ERICSON CORE, the director of photography on the original ‘The Fast and the Furious’, takes over directing duties.

Deep undercover, and with his life in imminent danger, Utah strives to prove they are the callous architects of these inconceivable crimes.

The film is replete with the most daring athleticism ever seen in a motion picture. These action adventure feats are performed by extreme athletes representing the world’s best in class in big-wave surfing, wingsuit flying, sheer-face snowboarding, free rock climbing, and high-speed motorcycling.

Get ready for some extreme action as the film will dive into theaters this Christmas on December 25th!