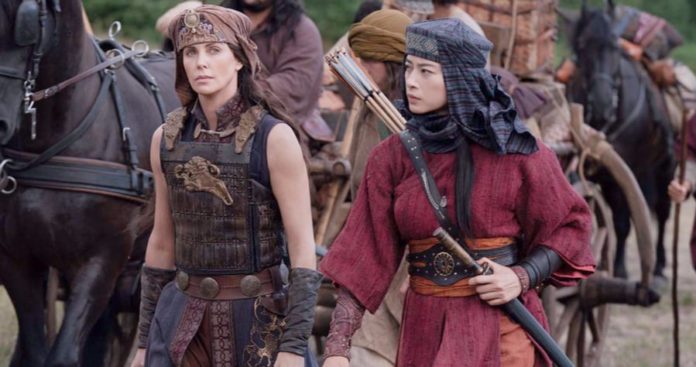 UPDATE: According to Variety the script for The Old Guard 2 has been completed. It is also confirmed that Marwan Kenzari and Luca Marinelli, who plays the gay couple, will both be back for the sequel.

Production is expected to start rolling in the first quarter of 2022.

As expected, the Charlize Theron-led actioner The Old Guard soars to the top of Netflix’s most watched list after premiering last Friday on the streaming service. The film is also looking very favorable with critics as it currently stands at 81% Fresh on Rotten Tomatoes. So to no surprise a sequel may be on the way as the author of the original graphic novel, Greg Rucka (who also wrote the screenplay), has always envisioned the story as a trilogy.

For those disappointed in the amount of screen time that Vietnamese martial arts star Veronica Ngo (who portrayed Quynh) had in the film, the end credit scene left the door wide open for Ngo to return in a much larger capacity.

“Part 2 will stick to the original novel. According to what author Greg (Rucka) wrote, Quynh’s rise will cause many problems. Besides, there are side stories that bring trouble around the world, a villain is not immortal, so it’s a really great balance between the two sides.”

With Quynh holding a grudge against Theron’s Andy for not being able to find and rescue her during her 500 years of suffering trapped in a coffin deep in the sea, Quynh is sure to “cause many problems.”

A potential Theron versus Ngo showdown is definitely something to look forward to in a sequel. In the meantime, here is the duo during their brief time together on-set.