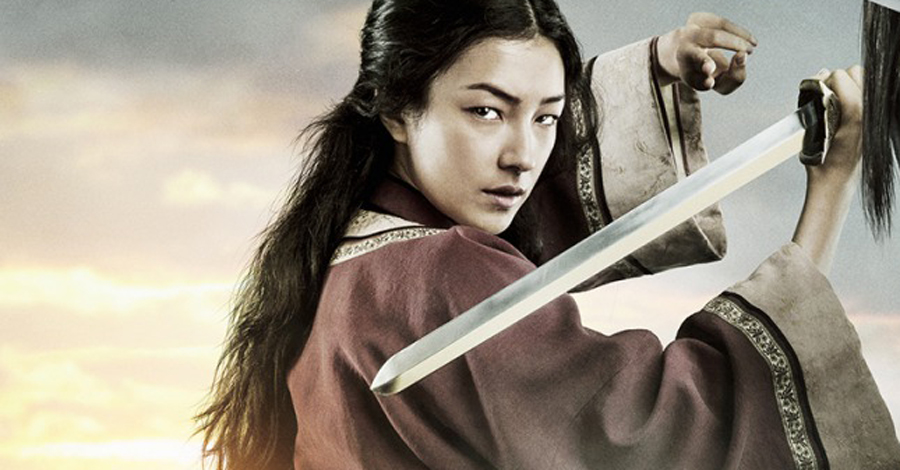 Meet NATASHA LIU BORDIZZO, the beautiful and talented break-out star of CROUCHING TIGER, HIDDEN DRAGON: SWORD OF DESTINY. MAAC was fortunate enough to have a one-on-one sit down interview with the Australian beauty in which she reveals how she landed the role in CTHD 2 and her experience on-set with such legends as director YUEN WOO PING, MICHELLE YEOH, and DONNIE YEN. 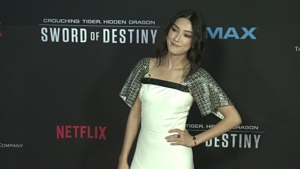 MAAC: Hi Natasha, it is great to meet you! I saw the film the other day, it is AWESOME.

MAAC: I know this (CTHD 2) is your first starring role…

NATASHA LIU BORDIZZO: It is my first anything, first ACTING experience.

MAAC: With your first acting gig in such a huge production and working with on-screen legends as Michelle (Yeoh) and Donnie (Yen), how was the experience like?

NATASHA LIU BORDIZZO: Oh my god. It was four months in New Zealand. So it is basically my first EVERYTHING. My first living away from home. First time acting, full time work. I was nineteen, just the most overwhelming experience on a personal and professional level. It changed my entire life. I was studying law, I quit when I got this film and became an actor. So it is a complete one eighty spin, life-changing.

MAAC: What was the process like? Did you just go to an audition and you got the part?

NATASHA LIU BORDIZZO: I was studying and my agent in Sydney, who is a modeling and acting agent, she represents a small amount of people who she thinks can be models and actors. She kind of harassed me! (laughs) She found me on Instagram and I was not interested. She wanted me to be a model and I had no interest. I was too busy, I was studying, I was tired. 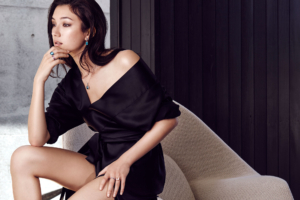 And then she asked me “Ok, if you do not do modeling, what about acting? There is a great audition this week for a Weinstein film called ‘Crouching Tiger, Hidden Dragon 2’. Have you heard of the first one?” And I said “Yeah, cool. Okay. That is actually pretty cool.” So I went in for the audition, which was my FIRST audition. I auditioned for a supporting role and they cast me as the lead the next day.

MAAC: Wow, that is great! Were you a fan of the Wuxia genre before being in this film?

NATASHA LIU BORDIZZO: You know, honestly I was quite cut off from it because being raised in Sydney I was quite westernized. My mom is Chinese but I think since doing this movie I have gotten more in touch with my Chinese side a lot more. I can speak Mandarin now. So before I did this movie I was just like any typical Australian teenager. I watched the first film, for the first time, as preparation for this. So I have not even seen the first film. It was a complete emergence for me to jump straight into that culture of Wuxia and everything.

MAAC: You must have been so young since the first film came out sixteen years ago.

NATASHA LIU BORDIZZO: I was five! That is why I did not see it. People kept asking me “Have you seen the first film in cinemas?” “Noooooo. I was like five years old.” (laughs)

MAAC: I read that you have a black belt in Tae Kwon Do, is that correct?

NATASHA LIU BORDIZZO: Yes, I do.

MAAC: Did that experience help you out with the fight choreography in the film?

NATASHA LIU BORDIZZO: It did, but I do not think it helped as much as people think it did. It was like “Yea cool, you got a black belt. It should help transition straight into it.” But nope. I have never held a sword before in my life! It is a completely different form. So Tae Kwon Do I would say it is much more punching and kicking, rigid, sparring kind of sport. And Wudang, it is like DANCE you know. It is completely different. It was learning from day one for me as a beginner. The only thing I had from Tae Kwon Do was basic focus, coordination, and all that but I could translate that into Wudang. 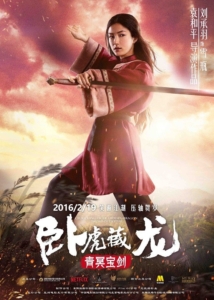 MAAC: How long did you actually trained to prepare for all the fight choreography and all that?

NATASHA LIU BORDIZZO: One intense month. Nine to five. Five days a week. You say a whole month, but man, I needed like three months! (laughs)

It is like these girls and guys that were teaching us have been doing it since they were four and we had to try to look like that in a month.

MAAC: Wow. But it shows on screen though! You did an awesome job!

NATASHA LIU BORDIZZO: Thank you! I did my best. I have to when the masters are watching! Fake it till you make it! (laughs)

MAAC: Right! You have someone like Michelle Yeoh who is a legend and have been doing this for years… 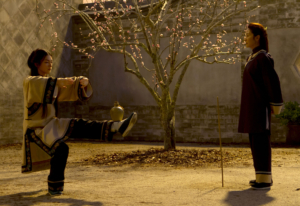 NATASHA LIU BORDIZZO: I know! She is my mentor and I am very much her student, but we are also like buddies. We would be like “Hey dude, yeah! Cool!” She is the coolest lady!

MAAC: That is great! You said you were cast when you were nineteen, I believe Zhang Ziyi was cast in the original at the exact same age. Do you see yourself maybe following the same path as her? After she did the first one and followed it up with multiple martial arts films (House of Flying Daggers, Hero), do you see yourself taking the same road? 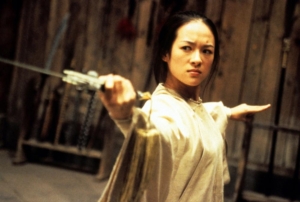 NATASHA LIU BORDIZZO: Funny enough, I do not. Because I think not only are our projects completely different even though they are taken from the same source material from the book series, especially that her project was directed by Ang Lee. You can not replicate Ang Lee, we are not trying to replicate Ang Lee. We have this fun new fresh project with a new take on things. We just want to continue a chapter in this timeless martial arts world.

But I think me and Zhang Ziyi, not only are we from different places, I am from Sydney and she is from Beijing I think. She started in dancing and I started in Tae Kwon Do. She is very much a Chinese actress and I am very much in the Western world of things. I do not speak fluent enough mandarin to fully work in Chinese films as of yet, I am working on it. (laughs)

So I think no. Our careers are very different. I do not necessarily want to just do martial arts movies. If martial arts adds to the story and the script, then sure, but I am open to anything. I have been reading some really great scripts with no martial arts in them.

MAAC: Is there anything you can tell us about regarding any of your future projects? You have anything lined up?

NATASHA LIU BORDIZZO: Nope. It is all on hold, I can not tell you anything. (laughs)

MAAC: How was it to work on all the wires and working with master Yuen Woo Ping? He is the master at what he does. 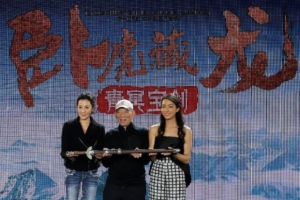 NATASHA LIU BORDIZZO: Wire-work is hard. You feel like an acrobat in the circus or something. It is like you are using muscles in your body that you do not even know existed because the effort it takes to stay straight and work against gravity. I do not know how these stunt people do it! They make it look so easy like you are flying around. I tell you what, in those scenes in the movie, it was not easy. My face was like blank but inside I am like “God!” (laughs)

It is so fun when you get it though. When you actually finally get the hang of it and you do the scene, it looks EPIC.

NATASHA LIU BORDIZZO: They do it from an angle that makes it look even better! When I was watching the daily takes of the wire-works, I was like “Geez.” You see master Yuen and his team just know exactly how to shoot it.

MAAC: So on-set, who was your biggest supporter, who mentor you the most? Was it Michelle (Yeoh)? 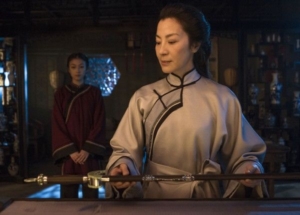 NATASHA LIU BORDIZZO: Michelle was definitely my mentor, but I was closest to Harry (Shum Jr.). Harry and I spent the most time together out of the four months. We became like each others rock you know. We relied on each other, we always check if we were okay. We were quite protective of each other on set, just looking out for each other. So yeah, he was like my bestie. Michelle was more like our “momma”. We were like her adoptive children. (laughs) 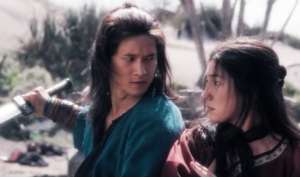 MAAC: That is cool. Regarding the movie, did you know why the producers went with the route of filming it entirely in English instead of Chinese like the original?

NATASHA LIU BORDIZZO: Well I think because the first one transcended language in the sense that it was played in Mandarin around the world. Especially with our movie was written by John Fusco and it was produced by Harvey Weinstein, who was a huge fan of Wuxia films. They obviously wanted to work in their native language. So I think they have the same thought with this movie like the first one, will transcend the language barriers and eventually be available in Mandarin and English. With both John and Harvey obviously speaks English, they just want to create it so they could control the story and the adaptation but knowing that it would end up in English and Mandarin anyway.

MAAC: Got it. Well, thank you so much for your time and it was great to meet you!

NATASHA LIU BORDIZZO: No worries! Thank you for coming in and it was nice to meet you too! 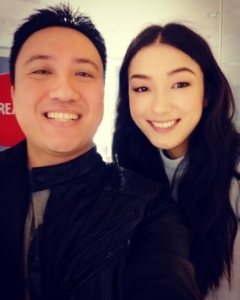