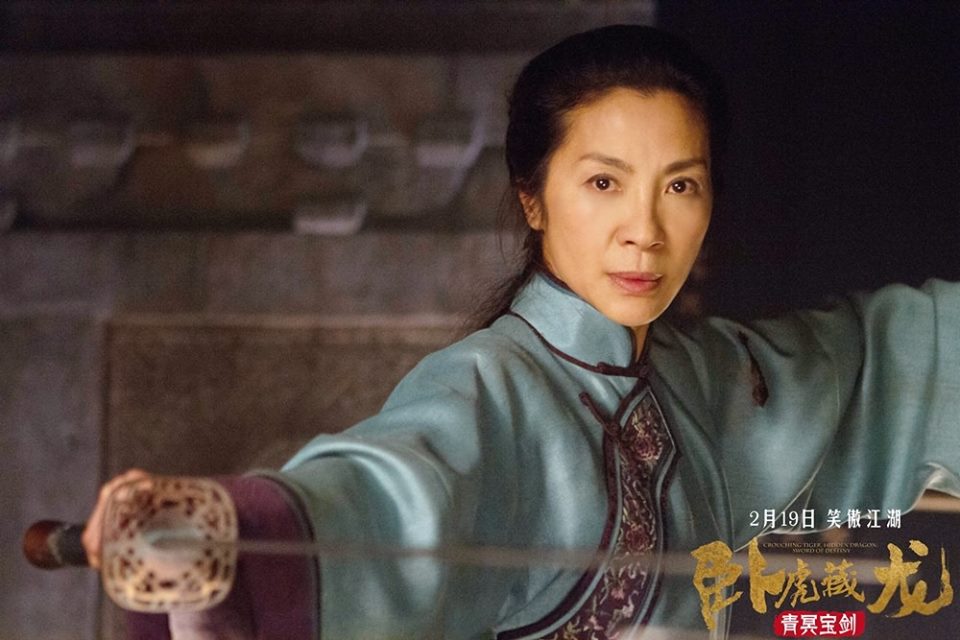 The former Miss Malaysia’s filmography is second-to-none as she have collaborated with some of the best of the best in the business including Chan (Supercop), Jet Li (Tai Chi Master), and Donnie Yen (Wing Chun). Yeoh also played the only ‘Bond Girl’ in the 007 franchise history that can literally stand toe-to-toe with James Bond himself.

MAAC: It’s been 16 years since the first ‘Crouching Tiger, Hidden Dragon’, what was it that convinced you to return and play Yu Shu Lien again?

After the huge success (of the original Crouching Tiger), everyone talked about the sequel and prequels and maybe in a way it’s a blessing in disguise that time has passed because the shadow of such a iconic film is huge and people always love to compare. Is the sequel going to be better, is it going to be bigger, is it going to be this or that. But guess what, ‘Sword of Destiny’ is a stand alone film.

Its a story on its own but it’s told by a character that you know (Yu Shu Lien), a very very interesting character, and one that I was interested to reprise.

Because time had passed and because at the time when you last saw her she was in a very tragic moment; still forgiving and hoping that this young girl (Zhang Ziyi) would live a good life, and then what happens to her.

For me this film was a chance for me to see that she had now become the enlightened warrior that she always wanted to be. She has a chance in this story to find redemption, to find love again, to have the happy ending she deserves.

I mean, she is one of the most compassionate characters I have ever played, but what was very fascinating was the story she’s telling about the wuxia world. In the first one you don’t really enter that world, we only talked about that world; but this one master Yuen Woo Ping takes you really into what is this world of power, revenge, and warriors who are willing to lay down their lives for a code. For loyalty you know, for a promise.

You know, I would love to really meet these warriors today. Where are these people, you know, in these times of need. We need heroes, we need people who believe that the right thing is to stand up and even if it costs you, you know…the ultimate price.

What is fascinating is that I have master Yuen Woo Ping, a big mentor to me, who I believe is the grandmaster of the wuxia world, because he has lived, breathed, directed and been involved in as many wuxia movies as there as been made – since the time of the Shaw Brothers.

For Harvey to bring in a creative team in support and to work together with Master Yuen, like the ying and the yang, like the east and the west, in perfect harmony.

It’s the culture we understand so well, but it is the culture that we would like to share with the rest of the world. But to present it in such a way that (the west) can embrace it like the way it should be.

So this was a very interesting way that he (Harvey) presented it and I felt that “I wanted to know the story” and the story has always been there. It’s part of the books that were written by Wang Dulu, it’s not something that Harvey have invented himself. It was a story that deserved to be told about these great warriors.

MAAC: Speaking of Woo Ping, it’s been over 20 years since you, Woo Ping and Donnie Yen were together in one film since ‘Wing Chun’. So how was it to reunite on set again after so many years?

MICHELLE YEOH: It was easy. I’ve worked with Master Yuen over the last few years as well. Every time he calls I can never say no to him. How can you say “no” to Master Yuen! Even to do a cameo in one of his films (True Legend). He’s always got me in his mind and I’ve always got him in my heart so you know it’s very easy.

And then when you work with someone like Donnie who’s so well versed with not just the martial arts but this genre of film makes it even easier.

Like there’s no need for further discussion, you know. it is what it is right. We would look at each other and there is no need to say anything. it is understood.

And it make’s it fun. We can relax, as we have great confidence in each others abilities and work, so yes it was easy. It was too easy. Please don’t tell anyone. (Laughs)

MAAC: How does it compare filming the first one in Chinese and this one in English?

MICHELLE YEOH: It was easier, I don’t read Chinese. The first one Chow (Chow Yun Fat) and myself had such a difficult time because you know, I had to do Pinyin (the official phonetic system for transcribing the Mandarin pronunciations of Chinese characters into the Latin alphabet) for all my lines, and his lines so I could understand what he was saying.

It was more work, to put it bluntly. Because the script (Sword of Destiny) was written in English it was much easier, I could read the script myself and I could discuss the nuances of the words myself. In that sense it was easier to work on this film.

But what I hope is that this film can transcend the language. Nowadays when we watch movies or TV stories, for instance doing ‘Marco Polo 2’, maybe it should all be in Italian right? Or all the Mongolians should be speaking Mongolian? But at the end of the day it’s English which is the universal language that everyone can be speaking together.

MAAC: Our Fans heard that you had just finished filming with Jason Statham on ‘Mechanic: Resurrection’, Can you give us any little insights into that?

MICHELLE YEOH: He’s fun, he (Statham) is very good at what he does. I actually only have a cameo role in that film, I really wanted to be able to do more because you know, with Jessica Alba, we had a nice time filming, we were in Thailand. I only really had about two weeks with them which was too short you know.

So I played the “reliable buddy”, that when he’s in trouble he needs to go to.

MAAC: We were hoping for you to have had a big role in that film.

MICHELLE YEOH: I know, I know. I think alot of people wanted that to have happened but maybe next time.

MAAC: Another big question fans keep asking. Is there any chance of another ‘Police Story’ with Jackie Chan?

MICHELLE: (Laughs) I’ll have to talk to him. He’s been so busy. He’s working none stop. He’s very very hard working. I’ll ask him. We had so much fun working on that film (Supercop) but that was tough work.

MAAC: Right, It really shows on screen! Such a classic.

MICHELLE YEOH: Oh my god, right! We were crazy. That was when we were young and crazy. Now we’re old and crazy. (Laughs)

MAAC: Other than the ‘Mechanic’, is there anything else you are working on?

MICHELLE YEOH: I Just finished ‘Marco Polo’ season 2 which will be coming out in June. And then I did a movie with Ridley Scott as producer and his son is the director. It’s called ‘Morgan’.

MAAC: Is it a full on action film?

MICHELLE YEOH: It’s a sci-fi thriller but not set in space, its on Earth. Its full on drama.

MAAC: Being from the Vietnamese community, I was very interested by the fact that Veronica Ngo was in this film. Can you tell us a little bit about whatever scenes you had with her?

MICHELLE YEOH: Fortunately for her I didn’t have any scenes with her, otherwise I would have kicked her ass (Laughs). She’s the one who gets to fight with everyone else! I was very jealous of that. She was very good at what she does. You know she’s a full fledged martial artist right, so having her on board was interesting but unfortunately I didn’t have any scenes with her.

Big THANKS goes out to ASIAN MOVIE PULSE & Netflix for making this interview possible.

And of course a big THANK YOU to Michelle Yeoh!