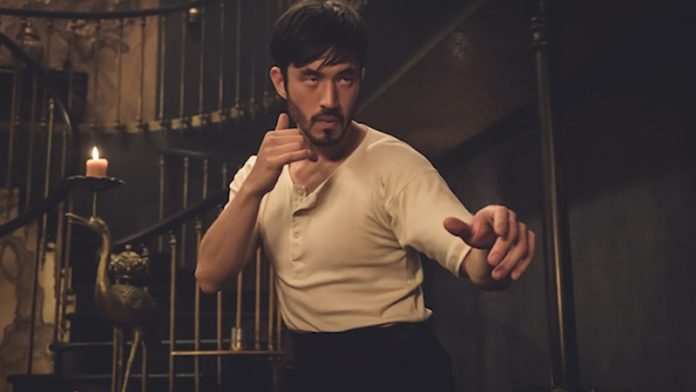 UPDATE: Have a look at the Full Trailer!

UPDATE: Check out the Teasers below!

Warrior is set to debut April 5th only on Cinemax.

UPDATE: With production set to start on October 22nd, the full cast of WARRIOR has been announced. Taking on the lead role is ANDREW KOJI who is best known for the martial arts short ‘Deep Pan Fury’. Koji will play ‘Ah Sahm’, “a martial arts prodigy who travels from China to San Francisco and ends up becoming a hatchet man for the most powerful tong in Chinatown”. He is joined by ‘The Raid’ actor JOE TASLIM (Fast & Furious 6) as ‘Li Yong’, “a tong Lieutenant and kung fu master”.

Producer JUSTIN LIN stated: “The martial arts genre a lot of times has been relegated to B-level action. And that’s not something we wanted to do. Going off of Bruce Lee’s original material, we wanted to build something that is character-driven, that has important themes and that also takes place in a part of American history that rarely gets talked about. That to me makes it something you haven’t seen before.”

UPDATE: CINEMAX has officially given a 10-episode order of the WARRIOR! The series is “a gritty, action-packed crime drama set during the brutal Tong Wars of San Francisco’s Chinatown in the second half of the 19th century. The series follows Ah Sahm, a martial arts prodigy who immigrates from China to San Francisco under mysterious circumstances, and becomes a hatchet man for one of Chinatown’s most powerful tongs (Chinese organized crime family).”

Produce JONATHAN TROPPER stated: “As a show that proudly bears the imprimatur of Bruce Lee, it’s our intention to deliver not only explosive martial arts action – which we will – but also a powerful and complex immigration drama that is as relevant today as it was in the 1870s,”

JUSTIN LIN added: “I’ve always admired Bruce Lee for his trailblazing efforts opening doors for Asians in entertainment and beyond. So I was intrigued when (executive producer) Danielle Woodrow told me about the urban legend of his never-produced idea for a TV show and suggested we bring it to life. Then when Shannon shared with us her father’s writings: rich with Lee’s unique philosophies on life, and through a point of view rarely depicted on screen – Danielle and I knew that Perfect Storm had to make it. Partnering with Cinemax has led to a wonderful collaboration with Jonathan Tropper, who has created a fantastic series inspired by Lee’s writings. We are all honored to continue what he started.”

CINEMAX have greenlit a pilot order for WARRIOR, a crime drama based on original ideas and materials written by the legend himself BRUCE LEE.

‘Fast & Furious 6’ and ‘Star Trek: Beyond’ helmer JUSTIN LIN will executive produce and possibly also direct. The pilot will be written by JONATHAN TROPPER (Banshee).

Lin have been developing this passion project of his since 2013 when he first teamed up with Lee’s daughter SHANNON LEE to try to move forward with the TV series. The stars have now finally aligned once the duo brought the idea to Cinemax in 2015.