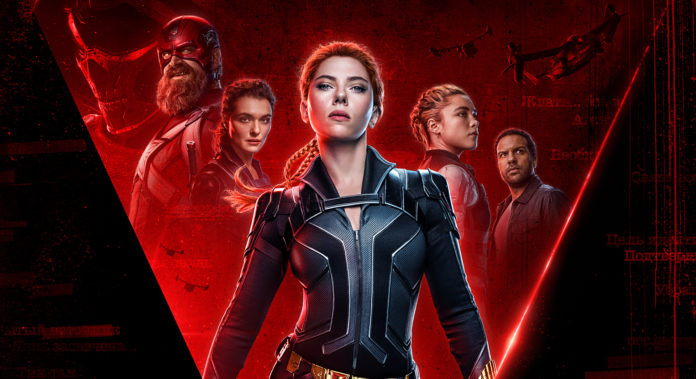 UPDATE: The release date for Black Widow has been pushed back again from May 7th to July 9th. The film will now be release simultaneously in theaters and on Disney+ with Premier Access.

Synopsis: In Marvel Studios’ action-packed spy thriller “Black Widow,” Natasha Romanoff, aka Black Widow, confronts the darker parts of her ledger when a dangerous conspiracy with ties to her past arises. Pursued by a force that will stop at nothing to bring her down, Natasha must deal with her history as a spy and the broken relationships left in her wake long before she became an Avenger.

UPDATE: The first Trailer has arrived along with the latest Poster below!

The film is a prequel that takes place after Captain America: Civil War but before the events of Avengers: Infinity War and Endgame.

UPDATE: The cast of Black Widow arrived on stage at San Diego Comic Con to confirm the official line up including Scarlett Johansson, reprising her role of Natasha Romanoff, as well as newcomers to the Marvel Cinematic Universe David Harbour as Alexei aka The Red Guardian, Florence Pugh as Yelena, O-T Fagbenle as Mason and Rachel Weisz as Melina.

A rough-cut Trailer was also shown giving us a glimpse of the action of the film along with our first look at the villain Taskmaster. An official concept art was revealed today by artist Andy Park which you can check out below.

UPDATE: Florence Pugh’s mystery role may have finally been revealed. On-set photos tweeted by Best of Widows show stunt dummies for Pugh and Johansson with one of the crates they were shipped in feature the name Yelena.

For those unfamiliar with the character, in the comics Natasha and Yelena were enemies who eventually become allies. Yelena then went on to become the second woman to take on the title of Black Widow.

UPDATE: Production on Black Widow is officially underway in Norway as images of leading lady Scarlett Johansson has emerged via Twitter. Also check out the official logo for the film (above).

UPDATE: Miss Jay Chou herself, Taiwanese actress Hannah Quinlivan (S.M.A.R.T. Chase) is currently in the runnings for a role in Black Widow. Chou broke the news about his wife via Instagram.

Quinlivan made her Hollywood debut last year alongside Dwayne Johnson in the action thriller Skyscraper.

UPDATE: Hellboy himself is joining the Marvel universe as David Harbour (Netflix’s Stranger Things) has been confirmed to join the cast of Black Widow.

Oscar winning actress Rachel Weisz (The Mummy, The Bourne Legacy) is also in talks for a role in the film. Details are being kept under-wraps so stay tuned as more is revealed.

UPDATE: Looks like Florence Pugh has beaten out Emma Watson for the coveted co-starring role in Black Widow.

Pugh is set to play “a spy on the same level as Romanoff, likely her moral opposite.”

Production will start rolling in London this June.

UPDATE: Rumors are swirling that Beauty And The Beast star Emma Watson (Harry Potter franchise) is currently the front-runner to land a role opposite Scarlett Johansson in Black Widow. The role is described as a “kickass female Bond.”

UPDATE: A possible synopsis for the film has been revealed via a subscription-based film production tracking site Production Weekly:

“At birth the Black Widow (aka Natasha Romanoff) is given to the KGB, which grooms her to become its ultimate operative. When the U.S.S.R. breaks up, the government tries to kill her as the action movies to present-day New York, where she is a freelance operative. The standalone film will find Romanoff living in the United States 15 years after the fall of the Soviet Union.”

Star Scarlett Johansson is set to score a huge payday of roughly $15 million to reprise her role as ‘Natasha Romanoff’.

The film will reportedly take place before the events of the first ‘Avengers’.

UPDATE: A search for a director is underway as Marvel is looking to hire a female helmer for the film. The top three candidates so far are CATE SHORTLAND (Lore), AMMA ASANTE (Belle) and MAGGIE BETTS (Novitiate), who has all met with Marvel head honcho Kevin Feige and star Scarlett Johansson.

UPDATE: Plot details has emerged suggesting that the BLACK WIDOW solo movie will go the prequel route. That Hashtag Show reported that “the film will find Natasha living in the United States 15 years after the fall of the Soviet Union! That timeline places the film firmly in the mid-2000s, meaning we’ll meet up with Nat prior to the events of Iron Man 2. That time frame opens up plenty of options, and while many fans seem to want a Black Widow/Hawkeye team up in Budapest, we’ve been told that early discussions about the film involved Sebastian Stan’s Winter Soldier”.

UPDATE: A BLACK WIDOW solo film may finally be moving forward as a writer has been hired! JAC SCHAEFFER (The Shower) will be penning the script with SCARLETT JOHANSSON’s input.

This does not mean a film has been officially green-lit, but it is definitely a step in the right direction.

Since making her debut as ‘Natasha Romanoff’ aka ‘Black Widow’ in 2010’s ‘Iron Man 2’, SCARLETT JOHANSSON have made quite an impression with fans as the badass female heroine.

Speaking to VARIETY Johansson talks about the possibility of the long overdue solo ‘Black Widow’ film:

The film could be a prequel/origin story as she continues:

“I would like for [the movie] to happen under the right circumstances. I think there’s a lot of opportunity to mine that story line. She’s got a really rich origins story. There’s a lot of places you can go — you can bring it back to Russia. You could explore the Widow program. There’s all kinds of stuff that you could do with it. You could really uncover the identity of who this person is, where she comes from and where she’s part of.”

Or perhaps have it take place AFTER ‘Captain America: Civil War’:

“It’s a possibility. There’s plenty of back story. Or not. It could be something else. Where do the Avengers go? They are underground. What happens then? What happens after it all falls apart? There are so many ways you can go. I think it would just have to be very much like its own specific thing. It would have to have its own specific vibe. It would have been totally different than any of the other standalone films. I think if the fans wanted it enough, then it would probably become a reality.”

There you have it. If you want a solo ‘Black Widow’ film, let your voice be heard!

Johansson will next be seen as the character in ‘Avengers: Infinity War’ set to hit theaters in 2018.