UPDATE: JAILBREAK will officially be represented by XYZ Films (The Raid) for international sales and most likely as distributors for its U.S. release.

After ‘Ong Bak’ put Thailand on the map back in 2003, other southeast Asian countries followed suit by releasing their own martial arts actioner including Vietnam’s ‘The Rebel’ and Indonesia’s massive hit ‘The Raid’. The latest is from Cambodia called JAILBREAK. Check out the action-packed Trailer below!

Directed by JIMMY HENDERSON, the film stars JEAN-PAUL LY who most recently did stunt work for such blockbusters as ‘Lucy’ and Marvel’s ‘Doctor Strange’. Co-starring alongside him is former adult film star turned action heroine CELINE TRAN, DARA OUR, SAVIN PHILLIP, THAROTH SAM, and SIRIVUDH SISOWATH. 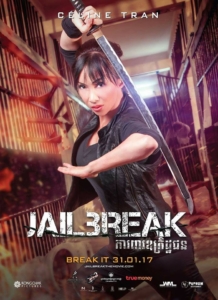 SYNOPSIS: What started as a simple escort mission will soon turn to chaos as the prisoners of Koh Kla take over the prison grounds. Five special task force officers trapped in the building will have to fight their way out for survival, as they wait for backup to come.

‘Jailbreak’ will undoubtedly be compared to ‘The Raid’ considering how similar the premise is. Judging from the trailer, the action will definitely be up to par.

We can all judge for ourselves when ‘Jailbreak’ opens in Cambodia on January 31st, 2017 and hopefully an international release soon after.