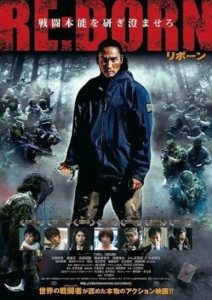 Look out for a release date soon.

UPDATE: The OFFICIAL Trailer with English subtitles is here!

SYNOPSIS: A special force unit of several members is found all dead during tactical exercise in the facility of National Defense Force. They were in the midst of exercising the irregular combat situation of one-man versus one unit named “Ghost Tactic”…

Toshiro, a small store clerk lives a quiet live with a young girl Sachi in the countryside of Ishikawa prefecture. Although his life is seemingly calm and peaceful, he sometimes struggles desperately to control his inner destructive impulse going on a rampage. One day, an enigmatic murder occurs in this small town. Later it turns out to be a warning from a mysterious man to Toshiro…

Toshiro used to belong to the special covert force best known possible, then had it destroyed with his own bear hands, leaving his former commanding officer Phantom unfinished. Now Phantom comes out of the shadow to execute the betrayer bringing along his most ruthless soldiers.

While Toshiro calmly takes care of those assassins sent out to kill him, he begins to get ready for close range combat even in the cruel way of deploying little Sachi as a decoy.

In the deepest minds of darkness and conflict, there are people who can only feel worthwhile when taking others’ lives. Based on the truth and real combat stories of professional covert assassins in your daily lives, it shows the destiny and practical battle scenes of those who chose the specific life for themselves.

XYZ Films will distribute the film in the U.S. with a release date coming soon.

UPDATE: Have a look at the ACTION-PACKED First Trailer now!

UPDATE: Check out the behind-the-scene featurette for RE:BORN to get a taste of the film’s action style! Thanks to director YUJI SHIMOMURA for sharing this with us!

Looks like Japanese action star TAK SAKAGUCHI (Versus, Death Trance) is not retired after all. Director YUJI SHIMOMURA (Death Trance) confirmed the news that Tak will be coming out of retirement for a new action film called RE:BORN. 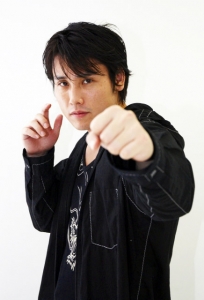 Tak stated: “After I retired, I found myself having a passion for action that was still smoldering inside of me. After a conversation with action director Yuji Shimomura, I wanted to thrive one more time and create the very last and most superb action movie with my utmost power and passion for the sake of a closure to my entire career. I am convinced that I have to give my very best one last time. That is how I feel about this project. I didn’t realize how many people chose to support a person like myself until after I retired. I hope this movie will be satisfying enough for them to feel absolutely alright for me to go. This is for them.”

RE:BORN is set to start production in 2015. Meanwhile you guys can check out the action packed ‘audition’ video featuring Tak below: