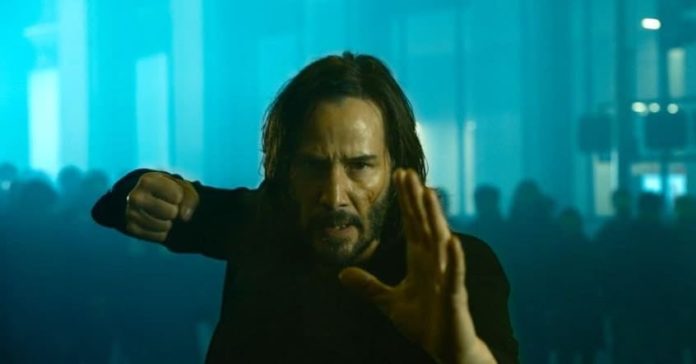 UPDATE: Take your first look at The Matrix: Resurrections below! The first official Trailer is set to drop this Thursday.

UPDATE: Warner Bros. has announced during CinemaCon that the official title for The Matrix 4 is indeed The Matrix: Resurrections. Stay tuned for the first Trailer soon!

UPDATE: Christina Ricci (Black Snake Moan, Casper) has been revealed to be in The Matrix 4 in a updated press kit from Warner Bros. Ricci has previously worked with Lana Wachowski in Speed Racer (2008).

UPDATE: The official title for The Matrix 4 has been leaked after a makeup artist for the film, Shunika Terry, shared an image of a wrap gift she received for working on the film. Nerding Reviews posted a screenshot of her original Instagram post:

Titles of The #Matrix4 has leaked online by the makeup artist who worked with the cast. The new sequel will bring back at least two dead characters to the Matrix. The Title explains a lot about what we can expect from the movie#MatrixResurrection #Matrix4https://t.co/gRfOTh5XCv pic.twitter.com/St44iPqA5M

As you can see, the official title is said to be Matrix Resurrections.

UPDATE: Originally delayed until April 1, 2022, Warner Bros. has announced that the release date for The Matrix 4 has moved up and will now hit theaters earlier on December 22, 2021.

UPDATE: Martial arts star Daniel Bernhardt (John Wick, Atomic Blonde) is confirmed to reprise his role as Agent Johnson in The Matrix 4. Bernhardt last appeared as the character in 2003’s The Matrix Reloaded.

UPDATE: Keanu Reeves and Carrie Anne Moss recently spoke to Empire Online revealing the incredible script is what drove them to return for The Matrix 4:

“I never thought that it would happen. It was never on my radar at all. When it was brought to me in the way that it was brought to me, with incredible depth and all of the integrity and artistry that you could imagine, I was like, ‘This is a gift.’ It was just very exciting,” says Moss.

Reeves added, “Lana Wachowski wrote a beautiful script and a wonderful story that resonated with me. That’s the only reason to do it. To work with her again is just amazing. It’s been really special, and the story has, I think, some meaningful things to say, and that we can take some nourishment from.”

UPDATE: Looks like The Matrix 4 will feature a reunion of the original stunt crew as well. Chad Stahelski (John Wick) and David Leitch (Deadpool 2, Hobbs & Shaw) is confirmed to be plugging back into the Matrix to help out with the stunts of the 4th installment. Stahelski stated to Collider:

“It’s more about the creative concept of some of the choreography and backing them up with stuff. Other than the Matrixes, most of their stuff…what makes [Lana] so great is she directs her own action. We’ve had second unit directors on some of the Matrixes just because of the logistics involved. But of late, and especially on Matrix 4, she’s directing her own action. The second units for them are mostly establishing shots, the B-sides of the some of the compositions for some locations. But Lana, she does her own action. She weaves it into the main unit stuff, which is why their stuff looks so good.”

He added, “They were really cool. They asked us to help out with the choreography and some of the physical training for the guys. I’m helping out a little bit for a sequence, I think Dave’s helping out for a sequence. Lana’s come back with a lot of love to have a pseudo-family reunion, so that’s been a lot of fun. It’s been good to see a lot of the crew members again. We just finished doing a sequence in San Francisco before the pandemic started.”

UPDATE: Check out Keanu Reeves and Carrie Anne Moss filming a motorcycle scene on the set of The Matrix 4!

UPDATE: Production has officially started as seen in the on-set footage of Keanu Reeves below!

UPDATE: Priyanka Chopra Jonas (Baywatch) is in final talks to join the cast of The Matrix 4. Production is set to start rolling in San Francisco this February.

UPDATE: A release date is set for The Matrix 4 on May 21, 2021. Keanu Reeves will be facing off with himself that weekend as John Wick Chapter 4 is also scheduled to open on the same date.

UPDATE: Best known for her role as Colleen Wing in Marvel’s Iron Fist series, actress Jessica Henwick is the latest to join the cast of The Matrix 4.

UPDATE: Another familiar face may be returning to The Matrix. Jada Pinkett Smith (Angel Has Fallen) is currently in negotiations to return as captain of the Logos hovercraft, Niobe, for The Matrix 4.

Smith last played the character in parts 2 and 3, The Matrix Reloaded and Matrix Revolutions.

UPDATE: Casting continues as Variety reports that Neil Patrick Harris (TV’s How I Met Your Mother) has landed a part in The Matrix 4.

UPDATE: First major casting news has arrived for the 4th installment of The Matrix as words are out that Aquaman star Yahya Abdul-Mateen II has landed a lead role. No further details is available at the moment, so stay tuned!

UPDATE: Looks like a “relaunch” is out of the question as news has come that Lana Wachowski is set to write and direct The Matrix 4! The franchise will continue with both Keanu Reeves and Carrie Anne Moss returning as Neo and Trinity.

Production is scheduled to roll sometime in early 2020.

UPDATE: According to Discussing Films the Wachowski will return to direct the new Matrix film set to begin production in 2020. Michael B. Jordan is said to be headlining the movie along with producing with Warner Brothers under his Outlier Society Productions company.

Rumors are that they have been secretly prepping the film under the working title “Project Ice Cream”. Zak Penn will be writing the script with Hugh Bateup, who was an art director on 1999’s ‘The Matrix’ set to return to the franchise as the production designer for this film.

UPDATE: Looks like the original franchise directors may be plugging back into The Matrix! Chad Stahelski (John Wick Chapter 3: Parabellum) broke the news during an interview with Yahoo Movies stating:

“I’m super happy that the Wachowskis are not just doing a Matrix, but they’re expanding what we all loved. And if it’s anywhere near the level of what they’ve already done, it wouldn’t take more than a call to go, ‘Hey, we want you to be a stunt guy’ and I would probably go and get hit by a car.” He added that he was ‘unsure’ if the pair would direct the Matrix project, but “If they wanted help, I would absolutely put down whatever I was doing to help them.”

Stahelski was a stunt double for Keanu Reeves on all three Matrix films and also served as stunt co-ordinator on the sequels, not to mention his successful directing debut on the John Wick franchise, he definitely got the resume to helm the new Matrix project if they need the “help”.

UPDATE: Reports are coming out that the new ‘Matrix’ may be a PREQUEL focusing on a young ‘Morpheus’ (originally played by Laurence Fishburne).

Throughout the original trilogy, there were hints of Morpheus’ past that took place off screen including his early relationship with ‘Niobe’ (played by Jada Pinkett Smith) and his visit to ‘The Oracle’ who revealed to him that he would one day find “The One”. The potential prequel may explore this even deeper ala what ‘Rogue One: A Star Wars Story’ did with the ‘Star Wars’ franchise.

As reported a few days ago, MICHAEL B. JORDAN is highly considered for a role in the relaunch and it may just be for a young ‘Morpheus’.

UPDATE: Writer ZAK PENN went to Twitter to clarify that the new ‘Matrix’ will NOT be a reboot.

Can’t comment yet except to say that the words “reboot” and “remake” were from an article. Let’s stop responding to inaccurate news.

All I can say at this point is no one could or should REBOOT the Matrix. People who know Animatrix and the comics understand.

Do I want to see more stories set in the universe of the matrix? Yes. Because it’s a brilliant idea that generates great stories.

There you have it. The relaunch of ‘The Matrix’ will be exploring more of that universe and not just rehashing the original.

The original film catapulted Reeves into super stardom and spawned two highly successful (but critically panned) sequels, ‘The Matrix Reloaded’ and ‘The Matrix Revolutions’. Not to mention it introduced western audiences to the beauty of master YUEN WOO PING’s fight choreography and the revolutionary “bullet-time” special effects.

Early reports are saying Warner Bros. is eyeing MICHAEL B. JORDAN (Creed) to star but it is not known weather or not the Wachowskis will be involved. It is also too early to tell if this will be a full-on reboot or an actual “relaunch’ to continue the story where Neo and the rest of the gang left off.

While promoting ‘John Wick: Chapter Two’, Keanu Reeves did express some interest to return as ‘Neo’ stating: “They (the Wachowskis) would have to write it and direct it. And then we’d see what the story is, but yeah, I dunno, that’d be weird, but why not?”

In my honest opinion, it would be wise to bring the original creators back along with Reeves especially now that the ‘John Wick’ films has recharged his action star status.

What do you guys think? Comment below and stay tuned for more details.