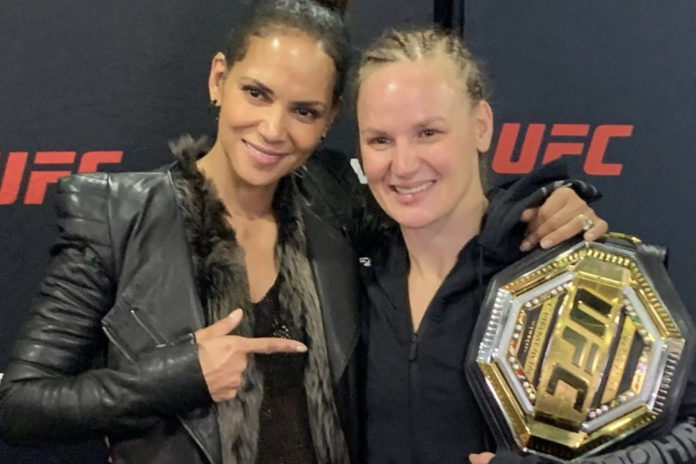 UPDATE: The first Trailer for Bruised is here!

Synopsis: Jackie Justice (Halle Berry) is a mixed martial arts fighter who leaves the sport in disgrace. Down on her luck and simmering with rage and regret years after her last fight, she’s coaxed into a brutal underground fight by her manager and boyfriend Desi (Adan Canto) and grabs the attention of a fight league promoter (Shamier Anderson) who promises Jackie a life back in the octagon. But the road to redemption becomes unexpectedly personal when Manny (Danny Boyd, Jr.) — the son she gave up as an infant — shows up at her doorstep

UPDATE: Director and star Halle Berry just announced (via Instagram) that Bruised will be release in select theaters on November 17th and globally on Netflix November 24th.

UPDATE: Check out the first look at Halle Berry from Bruised via Entertainment Weekly.

UPDATE: Looks like Halle Berry is going to have her hands full as she will be throwing it down with real life UFC flyweight champion Valentina Shevchenko! It has been revealed that Shevchenko is portraying Berry’s main rival in the film. We can say she is the Ivan Drago to Berry’s Rocky.

Staying true to the film title, Berry certainly got Bruised up during production stating:

“I broke some stuff on this one. It’s OK, I always get hurt but I realized that when you go hard, you’re bound to get hurt. When you do your own stunts, you’re bound to get hurt. In this movie, I was fighting the real UFC flyweight champion, Valentina Shevchenko, and you know what? She had to throw some real kicks and I had to really take them and that really broke some bones. She’s a beast but I couldn’t have asked for a better teacher, a better scene mate, a better fight partner. She just brought so much reality to it for me. At times, I felt like I was really fighting. Like our referee that was in the movie is a real referee and he says a couple times ‘man I thought I was watching a real fight’ because she brought so much power and authenticity to our fight scenes.”

UPDATE: Production on Bruised is set to get underway this week in Newark, New Jersey. Berry has been training the last few weeks for the role to get into MMA shape.

What a dream come true! 🙏🏽 #BruisedTheMovie

Happy #FitnessFriday, y’all! To round out the rest of the year, I have an extra special treat. My training for #BruisedTheMovie has introduced me to so many incredible individuals – professional athletes and trainers that have pushed my inner-warrior to places I would have never imagined! Today, we begin a series that will bring some of their insight directly to YOU. Excited to announce #FitnessFriday : Bruised Edition, and we’re opening with a bang! Check stories for a one-on-one interview with Olympic boxer @jennifer_dugwen_chieng, a bad ass athlete and beautiful soul who’ll walk you through some of her go to fitness favorites. Enjoy and Happy Friday!! 🥊🥊

UPDATE: Looks like Bruised will be making a major facelift as Halle Berry (John Wick 3: Parabellum) has been announced to take over the lead role from Blake Lively. Not only will Berry be starring in the film but she is also set to make her directorial debut behind the camera. The previously announced director Nick Cassavetes is no longer attached to the project.

‘John Wick’ producer Basil Iwanyk of Thunder Road Pictures will be producing alongside Entertainment 360 and Linda Gottlieb. The fight choreography/stunt team from ‘John Wick’ is also on-board for Bruised, which means we can expect some hardcore action from the 87eleven Action Design crew.

Berry will portray “Jackie “Justice,” a disgraced MMA fighter who has failed at the one thing she’s ever been good at – fighting. When 6-year-old Manny, the son she walked out on years ago, returns to her doorstep, Jackie has to conquer her own demons, face one of the fiercest rising stars of the MMA world, and ultimately fight to become the mother this kid deserves.”

Production is set to roll next year in March.

Coming off of her box office hit ‘The Shallows’, Blake Lively (Green Lantern) is about to take the action from the ocean to the MMA octagon in the upcoming action drama Bruised.

Directed by Nick Cassavetes (The Notebook), the film follows “Jackie, a single mother working two jobs and a disgraced MMA fighter who has been up against the ropes her entire life. When the authorities threaten to take her young son away from her, she must get back in the cage for one last chance to fight for redemption and give her son the life she always wanted.”

Expect more casting to be announced soon. Do not be surprise if some real MMA fighters gets featured in the film. Here’s hoping they call up Gina Carano (Fast & Furious 6), who recently worked with Lively’s real life husband Ryan Reynolds in last year’s smash hit ‘Deadpool’.