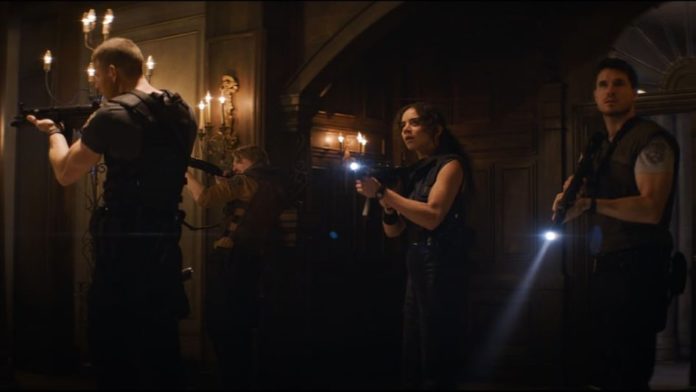 UPDATE: Sony Pictures has pushed back the release date for Resident Evil: Welcome to Raccoon City from September 3rd to November 24th.

Official logline: In the once booming home of the pharmaceutical giant Umbrella Corporation, Raccoon City is now a dying Midwestern town. The company’s exodus left the city a wasteland…with great evil brewing below the surface. When that evil is unleashed, the townspeople are forever…changed…and a small group of survivors must work together to uncover the truth behind Umbrella and make it through the night.

UPDATE: The official title for the upcoming Resident Evil reboot has been revealed: Resident Evil: Welcome to Raccoon City. The film will follow the events of the first two games in the popular Capcom video game series.

UPDATE: Have a look at the banner Teaser Poster for the Resident Evil reboot which is set to hit theaters on September 3rd.

It is also revealed that Donal Logue will be playing Chief Brian Irons, Chad Rook as Richard Aiken, Lily Gao is Ada Wong, and Marina Mazepa is Lisa Trevor.

The reboot will be a origin story set in 1998 in Raccoon City.

“After a dozen games, six live-action movies and hundreds of pages of fan fiction, we felt compelled to return to the year 1998, to explore the secrets hidden in the walls of the Spenser Mansion and Raccoon City,” said producer Robert Kulzer.

Director Johannes Roberts added, “With this movie, I really wanted to go back to the original first two games and re-create the terrifying visceral experience I had when I first played them whilst at the same time telling a grounded human story about a small dying American town that feels both relatable and relevant to today’s audiences.”

UPDATE: Looks like James Wan (Aquaman) is no longer involved with the upcoming Resident Evil reboot. Wan spoke to Joblo.com regarding the project stating:

“I’m not doing that anymore. That has been dropped. They announce that I’m attached to a lot of stuff and a lot of them are not necessarily real. It’s kind of annoying when things come and go, or things never came in the first place. I hate it when my projects get announced. It makes it seem like I’m attached to a lot of things when in fact I’m not necessarily doing so many things. A lot of my stuff just get announced and I don’t want them to be announced but people love to announce them.”

However, the reboot is still moving forward as Johannes Roberts (47 Meters Down) has been announced as director. Stay tuned for casting.

After Resident Evil: The Final Chapter grossed over $300 million worldwide back in January 2016, there was a good feeling that it would not really be the FINAL chapter.

Constantin Films and Screen Gems plans to reboot the franchise that will span six more films with a completely new cast. James Wan has signed on to produce with a script written by Greg Russo.

As a master of horror (Saw, The Conjuring, Annabelle) along with his experience with action (Aquaman, Fast & Furious 7), Wan seems like the perfect man for the job. He is also no stranger to the video game genre as he recently collaborated with Russo on another reboot, Mortal Kombat for New Line, which just completed production.

Lets hope this reboot can replicate some of the action displayed in the current CGI film Resident Evil: Vendetta. As you can see in the clip below, combining the ‘John Wick’-esque style of action with zombies seems like a match made in heaven.