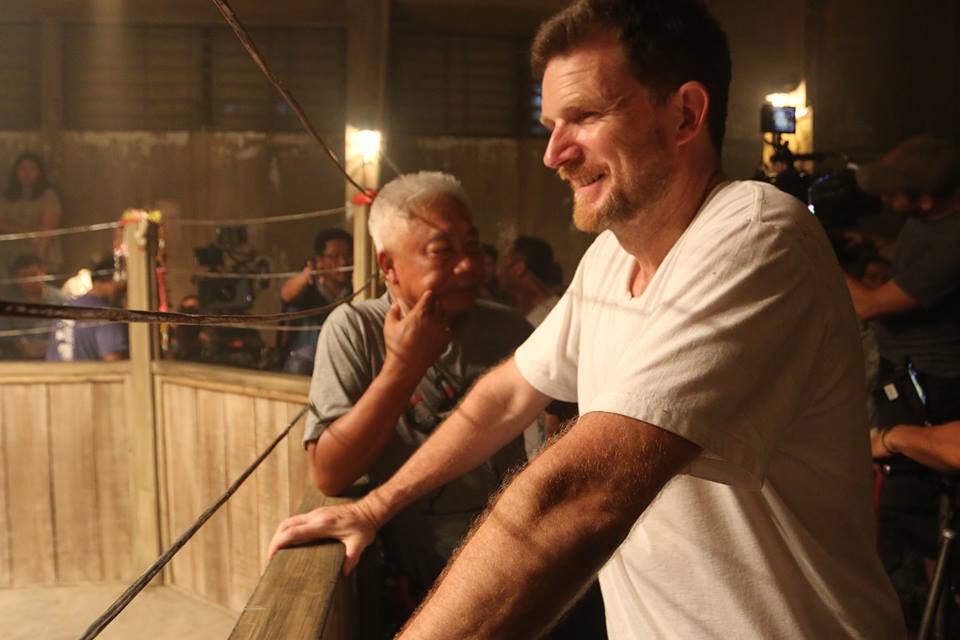 MAAC: From the setting of the movie to the type of martial arts showcased in the film, what inspired you to come up with the idea for ‘Savage Dog’?

JESSE V. JOHNSON: Hi David, my first film was called ‘Pit Fighter’, it was a little action picture set in Mexico about illegal fighting and gangsters. I had put my heart and soul into making the film, but like many independent films, during the editing I was removed, I think I was taking too long, or something like that. The film was literally raped, executed and left dead behind a bush in the desert. At the time I was unqualified to deal with that kind of sabotage, regardless the final film was a very distant version of what it could have been.

So, I vowed to remake the pit-fighting story, I fell out of love with the Mexican setting, it has been done too well in ‘Narcos’ or ‘Sicario’ to try to go there. I read a lot, trying to avoid doing what other films are doing. There is a book called ‘The Devil’s Guard’, about a German who was in the Wehrmacht during WW2 and then the French Foreign Legion during their Indo-China conflict, I always felt there was an incredibly dramatic setting for a film, with some incredible potential for rich characters.

MAAC: I read that the movie was filmed on location in Vietnam. What was the major difference from filming in such an exotic location compared to Hollywood?

JESSE V. JOHNSON: The film was filmed in multiple locations, by a VERY committed and determined cast and crew, we went without food, and worked in torrential rain, dust, heat and bugs of all descriptions, with many hardships during the shoot, no phones or internet no computers that worked, I loved every bloody second of it.

MAAC: Having a martial arts and stunts background yourself, did that make it easier for you to direct the action set pieces?

JESSE V. JOHNSON: I know what is safe and what is foolish to attempt – I know I can push to the very edge of what is dangerous and rely on the talents, common sense and training of my stunt team, this puts me in a great position as the director of an action film. I don’t get too involved with Scott’s martial arts, he does most of that himself or with the choreographer, I’ll suggest or hint, or set an overall-tone or style. I have my hands full with everything other than the martial arts. 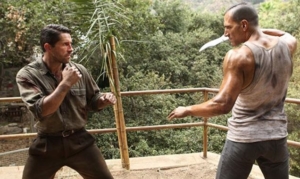 I am a reactionary director, I prepare like crazy, storyboard or shot list, but more importantly, after preparing I like to see what the location, or actors bring, I will sometimes discard all my planning to do something else, it drives the crew nuts sometimes, but there must be that flash of danger or impulsiveness in the process for me.

Shooting a previz of someone else’s rehearsal bores the Hell out of me, there are two dozen choreographers in SAG who can do that right now, and the results will almost all be identical. Identical – I’ll say it again, they look identical, I get fight scenes emailed to me, PM’d to me, posted on my social media, they almost all look identical. Character and story are all that matter, an investment in that and everything else is secondary. A fight scene for the sake of a fight scene is nothing to me, this I learned from doing amazing VERY expensive stunts, for some of the very best stunt coordinators and second unit directors in the business, these sequences costs millions, and took months to shoot, with huge crews working every day and using the very best imaginations in the business to create new and cutting edge action – but placed in a movie with a crappy story and the action scene, no matter how great fizzled. My energies go on the story and performance – this I learned from being a stuntman.

MAAC: With such real world-class martial artist as Scott Adkins, Cung Le, and Marko Zaror involved in the film, what percentage of the fight scenes were actually choreographed compared to simply improvising by the actors? 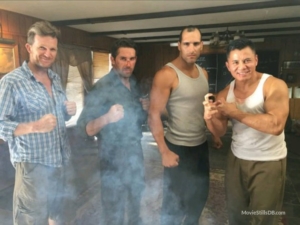 JESSE V. JOHNSON: Nothing is improvised, it is all planned ahead, or suggested and carefully integrated during rehearsal on the day. Those guys hit hard you don’t want to be fooling around. That said all three are incredibly inventive and imaginative with their suggestions, I think they all contributed heavily to the continuity. When our Choreographer had to work with John Woo in Japan, Marko Zaror took over the duties of choreography on our film for three days, wore his baseball cap and actually became the fight choreographer on the crew, and I’ll tell you something, he is bloody good, as expert as any fight guy I have worked with. Scott is very, very experienced with camera placement and very conscientious about those sort of details, while Cung has a real world knowledge of actual technique that is staggering, he is sharp and intelligent and can call on the experience of real-fighting in a way that not many living souls can.

MAAC: If I’m not mistaken, you’ve first worked with Scott on 2005’s ‘Pit Fighter’ and has now made 4-5 films together. What is it that makes your partnership work so well? 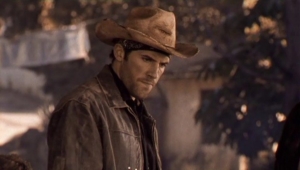 JESSE V. JOHNSON: Scott’s motivation and self discipline are off the chart, he is a great collaborator and forces you to reach deep. We drive each other well, if he is getting tired (rarely) or defaulting to instinct I will mention it, if he thinks I am making a mistake he is not afraid or concerned about mentioning it, it is sometimes tense and not always pleasant, but the films I do with him are of a high quality, a quality that continues to increase. 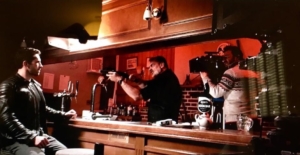 Savage Dog was immensely difficult and complex, we had to replace the camera crew at the end of the first week, which was traumatic and difficult and it still turned out quite well, it has also been VERY profitable, the result of that profit for me was a picture for Sony, ‘Accident Man’ (with Scott, Michael Jai White, Ray Park, and Amy Johnston) which is light years ahead in terms of budget and production value, followed by ‘Triple Threat’ for Arclight, which is a quantum step ahead again. ‘Pay Up’ is an altogether different film than any of the rest and very character driven, these are just very good movies. ‘Savage Dog’ in all it’s barbaric and rough-trade economy set me on the path for those others so I am very thankful, and it is down to Scott’s encouragement and mentoring that they have continued to increase in quality.

MAAC: Speaking of Scott, I can’t let you go without asking you a bit more about ‘Triple Threat’. I just saw the Comic-Con Trailer a couple weeks ago and it blew my mind! How in the world did you manage to get all these martial arts badasses together into one film? These guys can pretty much give ‘The Expendables’ crew a run for their money! 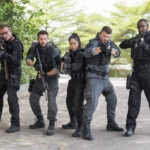 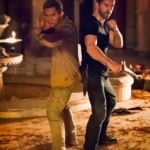 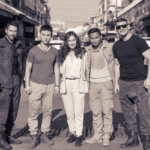 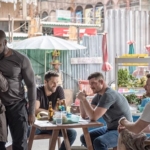 JESSE V. JOHNSON: The original ‘Triple Threat’ of Tony Jaa, Iko Uwais and Tiger Chen was the package that I was signed on. When I read the script I realize if we are going to do this we will need three bad guys who are equally talented and resourceful. I fought hard to have Scott come on as the lead nemesis, and then Michael Jai White, UFC Champion Michael Bisping and Jeeja Yanin were attached when production went into full swing. It really is an incredible array of action heroes, and these guys REALLY deliver, performance and action-wise, it is a really intense and cool picture, I am just very proud of it, thank you for your words of encouragement.

MAAC: Besides ‘Triple Threat’ and ‘Accident Man’, which I’m also very excited for, can you tell us a bit about any other projects you have in the works?

JESSE V. JOHNSON: I’m wrapping up a project called ‘Pay Up’ with Scott which is more character driven than the others, but will still have an element of adrenaline fueled action, but it is really about the mess that happens when two truly bad guys try to change their ways. 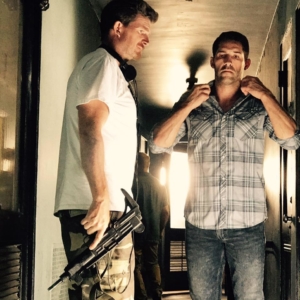 MAAC: Thank you so much for your time Jesse and we are definitely looking forward to ‘Savage Dog’, ‘Accident Man’, and ‘Triple Threat’! We wish you the best of luck on your future projects!

JESSE V. JOHNSON: Fantastic! Thank you! I’m a huge fan of your website M.A.A.C. and I really do hope I delivered. Please tell the fans to be open and have them tell me what I’m doing wrong or if they like something, fantastic. Lets make movies that we love, lets push the boundaries, do something with the budget that we can and create a new wave of action movies!