UPDATE: KILLING GUNTHER is set for release on Blu-Ray and DVD December 26, 2017. 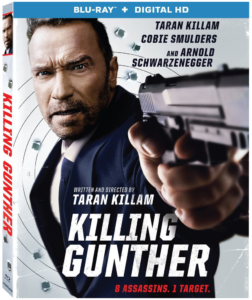 Action superstar Arnold Schwarzenegger (The Terminator) is back in the action comedy KILLING GUNTHER!

The film follows the story of “Gunther (Schwarzenegger), the world’s greatest hitman. There are plenty of reasons to want to kill him: he’s arrogant, he’s a show-off, and he steals jobs. The assassin community is tired of it. Determined to retire Gunther for good, a group of eccentric killers from across the globe come together to set the perfect trap. But their master plan quickly turns into a series of embarrassing fails as Gunther always appears one step ahead.”

The film will be available on Ultra VOD September 22nd, and in select theaters and On Demand October 20th.