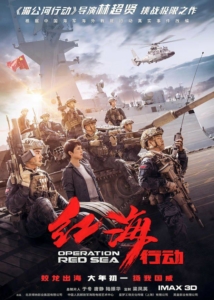 Action maestro DANTE LAM (The Viral Factor) is back at it again after the success of last year’s ‘Operation Mekong’ with OPERATION RED SEA.

The film is loosely based on the Chinese evacuation of nearly 600 Chinese citizens and 225 foreign nationals from the port city of Aden during the 2015 Yemen Civil War. The cast consist of PRINCE MAK, ZHANG YI, HUANG JINGYU and DU JIANG.

In addition to the Trailer, an English promo from Cannes has also been released to hype up fans who are craving another pro-Chinese military nationalistic actioner ala ‘Wolf Warrior 2’.