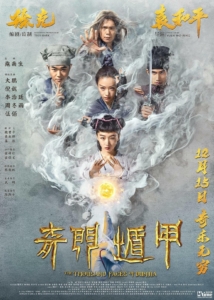 A Trailer has been release for director YUEN WOO PING’s fantasy wuxia epic THE THOUSAND FACES OF DUNJIA.

SYNOPSIS: During a time of unrest, the world is about to face a great calamity. To keep the peace of the world, the heroes of the pugilist world form a secret organization.

Written and produced by TSUI HARK (Detective Dee franchise), the film is a remake of the 1982’s ‘The Miracle Fighters’ which was also directed by Woo-ping.

‘The Thousand Faces of Dunjia’ is set for release on December 15th.