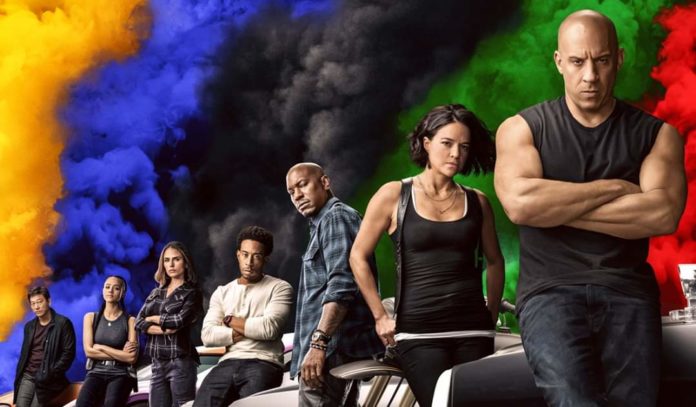 UPDATE: The explosive Trailer #2 is here!

UPDATE: The release date for F9: The Fast Saga has been pushed back again from May 28th to June 25th.

UPDATE: The official synopsis for F9: The Fast Saga has been released.

“Vin Diesel’s Dom Toretto is leading a quiet life off the grid with Letty and his son, little Brian, but they know that danger always lurks just over their peaceful horizon. This time, that threat will force Dom to confront the sins of his past if he’s going to save those he loves most. His crew joins together to stop a world-shattering plot led by the most skilled assassin and high-performance driver they’ve ever encountered: a man who also happens to be Dom’s forsaken brother, Jakob (John Cena, the upcoming The Suicide Squad).F9 sees the return of Justin Lin as director, who helmed the third, fourth, fifth and sixth chapters of the series when it transformed into a global blockbuster. The action hurtles around the globe—from London to Tokyo, from Central America to Edinburgh, and from a secret bunker in Azerbaijan to the teeming streets of Tbilisi. Along the way, old friends will be resurrected, old foes will return, history will be rewritten, and the true meaning of family will be tested like never before.The film stars returning cast members Michelle Rodriguez, Tyrese Gibson, Chris “Ludacris” Bridges, Jordana Brewster, Nathalie Emmanuel and Sung Kang, with Oscar® winner Helen Mirren and Oscar® winner Charlize Theron. F9 also features Grammy-winning superstar Cardi B as new franchise character Leysa, a woman with a connection to Dom’s past, and a cameo by Reggaeton sensation Ozuna.“

UPDATE: Variety has reported that director Justin Lin is set to return to helm two more Fast & Furious films. The 10th and 11th installments will mark the end of the Fast franchise. But of course this does not necessarily mean its the end of the Fast universe. A sequel to Hobbs & Shaw along with other spin-offs featuring characters from the Fast films is still in the works.

UPDATE: Sung Kang is back as Han in the first Trailer for F9: The Fast Saga!

UPDATE: Production has officially wrapped on the 9th installment of Fast & Furious.

It’s an official #F9 Wrap! This is by far the most ambitious film of the series and I am forever grateful to our amazing crew from London, Edinburgh, Tbilisi (Georgia), Phuket & Krabi (Thailand), and Los Angeles.

He will be joining the previously announced John Cena as part of the new members of the Fast family. Charlize Theron and Helen Mirren will also be returning to the franchise alongside original members Vin Diesel, Michelle Rodriguez, Tyrese Gibson, Ludacris, Jordana Brewster, and Nathalie Emmanuel.

The film is two months into production with a release date targeted for May 22, 2020.

UPDATE: With Dwayne Johnson leaving the ‘Fast’ films for his own spin-off (this summer’s Hobbs & Shaw), franchise star Vin Diesel has apparently found his replacement in fellow WWE superstar John Cena (Bumblebee). Diesel hinted the addition of Cena for Fast & Furious 9 in an Instagram post:

Producer and star VIN DIESEL is planning to cap off the ‘Fast’ franchise with a bang by bringing back JUSTIN LIN to not only direct FAST & FURIOUS 9 but also the final 10th installment!

As you can see in the video, original cast member JORDANA BREWSTER is also set to return after being absent in ‘The Fate Of The Furious’.