Here in the west actor/martial artist TAK SAKAGUCHI is probably most known for the cult low-budget gangster/zombie-flick ‘Versus’ (Ryûhei Kitamura, 2000) as well as for staging most of his films in the woods. While I’m not too familiar with his work, in RE:BORN he manages to impress with his carefree swagger and loose ease in delivery. 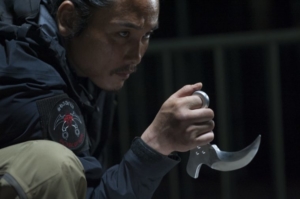 Tak plays “Ghost”, a retired covert soldier who runs a store and takes care of a young girl. He works a bit, hang out with a couple of friends and sees his shrink sometimes. One day an old general shows up with a bunch of assassins, an army of cannon fodder and Ghosts old pal ‘The Abyss Walker’. To their surprise Ghost could very well turn out to be the mythical soldier legend “Ghost Reborn”. He sets about “processing” everyone with different types of bladed weapons.

Action Director turned Director Yûji Shimomura keeps the no-nonsense story simple and gives mood and environment precedence. Everything from how people move and react, to framing and storytelling is heavily influenced by Anime. This cartoonishness disarms any pretentious leanings as does the tonal consistency aide in overcoming a few instances telling of its lower budget. Thus making Re:born a successful exercise in “Manga-in-Motion”. 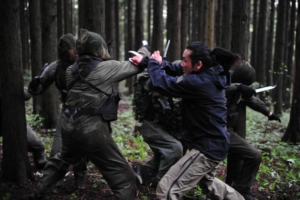 Action in first half of the movie consists mainly of short bursts interspersed throughout, setting itself up proper before letting loose completely in the second half, which is just one set-piece after another. The bulk of which is a big attack on an army in the woods, followed by a succession of fights in a nondescript factory. Yoshitaka Inagawa, a real life combat/self defence instructor, plays main bad guy and handles choreography. Establishing here his own system: “zero range combat” to great effect. It is mainly focusing on efficiency and swift, brutal stabbings with short bladed weapons.

Tak portrays through body language the resurging dormant corporeal memories of battle, awakened as from sleep. A motion steadily builds through RE:BORN, from his skulking frame, via a nodulation in the shoulders, complete with cracking sounds, and finally the complete transformation in this odd transition to a shoddy Praying Mantis posture. 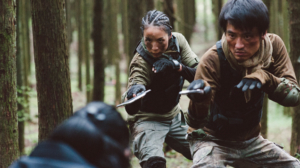 RE:BORN achieves through it’s staging and precise choreography something fresh and exciting, culminating in it’s concluding fight. Apparently filmed using real knives, this duel, through cautious back and fore, coupled with weird movement patterns inspired by praying mantis and Capoeira reaches for both the sublime and the silly. There’s an austerity at work here in how these bodies move, imbuing it with both a realistic/insightful approach to short range combat as well as a controlled sense of fun. This stylization and otherness of movement lends it a formalised and heightened feel. The choreography and taut visuals result in both a dry visual wit and in slam-bang excitement.

When Action Cinema is at its finest there is an excitement to movement itself. A will to push forward, however slight, the way of capturing motion, speed and destruction. Even if you have seen it a thousand times, suddenly you see it afresh. RE:BORN achieves this with ease by toning down the cheesy over the top low budget splatter martial arts fantasy antics from their earlier cult movies, opting instead for a clear, minimalist style. Tak Sakaguchi, Yoshitaka Inagawa,Yûji Shimomura and the rest of the crew really concentrated their efforts and delivered a modern action classic. Tak who threatened with retirement in 2013, returned for this, designed as his swansong and if true he sure went out on a high note. 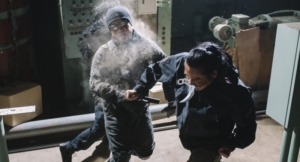