20 years after the innumerable YOUNG AND DANGEROUS movies and spin-offs, the cast reunites for GOLDEN JOB and goes for some inconsequential and nonsensical globetrotting shenanigans. 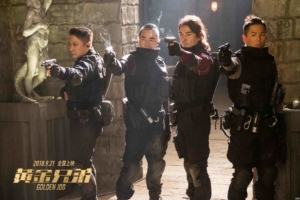 Heavy handed sentimentality and nostalgia galore is interspersed with substantial, robust, if somewhat bland action scenes throughout. One part commercial glossy heist movie, one part vehicular mayhem across the globe ala ‘Fast and Furious’ and one big part early 00’s throwback HK melodrama.

Ekin Cheng does have a great scene where, sitting on the pier with his girlfriend, he dips his feet in the water and for no apparent reason, has his boots on. No one acting like this is not a weird thing.

Legendary stuntman, Chin Kar Lok, who was a body double for Jackie Chan in the 80s, more recently served as action director on a number of Dante Lam movies, directs, acts and action choreographs this film. His great work on Soi Cheang’s masterful car chase movie MOTORWAY sets a high bar for set-pieces and while competent and somewhat exciting, the action here contains some wonky CGI which puts a dent in the proceedings. 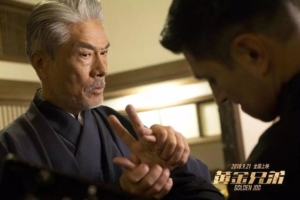 Actually nothing really happens. GOLDEN JOB never amounts to much and in the end is mostly about a bunch of guys enjoying each others company. They travel, sing, drink champagne, wear expensive clothes and drive expensive cars and blow stuff up. Nothing wrong with that. It’s all enjoyable fluff and Chin Kar Lok adds some fitting imagery to the proceedings. This kind of throwback Hong Kong movies has lost some heart and can feel a bit rote/overcooked but action here is well made and there is lots of it. 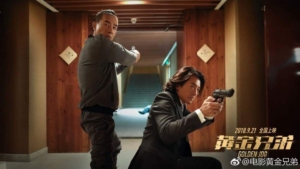