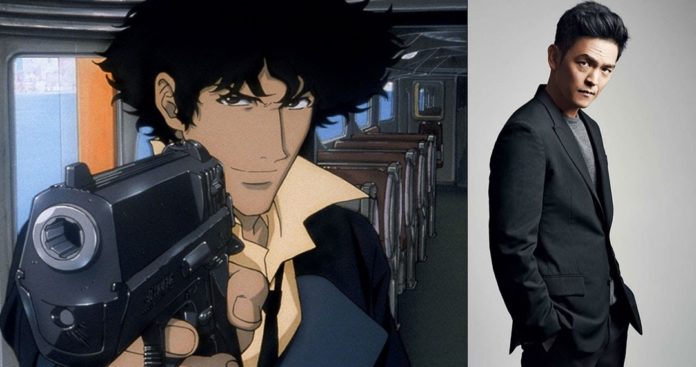 UPDATE: Deadline reports that leading man John Cho has suffered a knee injury on the set of Cowboy Bebop. Production is expected to be halted for 7-9 months.

Best wishes to Cho for a full recovery.

UPDATE: Netflix announced that actress Elena Satine (TV’s The Gifted) has been cast as Julia.

The character is described as “with a sultry beauty and a voice to die for, Julia is the dream-like object of Spike Spiegel’s desire. She struggles to survive in a violent world.”

Netflix is bringing the live-action adaptation of the popular anime series Cowboy Bebop to the small screen with John Cho (Searching) taking on the lead!

Written and executive produced by Chris Yost (Thor: Ragnarok), Cowboy Bebop follows “a ragtag crew of bounty hunters on the run from their pasts as they hunt down the solar system’s most dangerous criminals. They’ll even save the world — for the right price.”

Cho plays Spike Spiegel, an “impossibly cool “cowboy” (bounty hunter) with a deadly smile, a wry wit and style to spare. He travels the solar system with his ex-cop partner pursuing the future’s most dangerous bounties with a combination of charm, charisma and deadly Jeet Kune Do.”

Shakir is Jet Black, Spike’s partner and captain of the Bebop.

Pineda is Faye Valentine, a bounty hunter suffering from amnesia after years of being cryogenically frozen, Faye does whatever it takes to survive — whether she’s lying, stealing or just being a thorn in Spike and Jet’s side.

Cowboy Bebop is co-produced by Netflix with Shinichiro Watanabe (director of the original anime) serving as consultant, so the series is definitely in good hands.