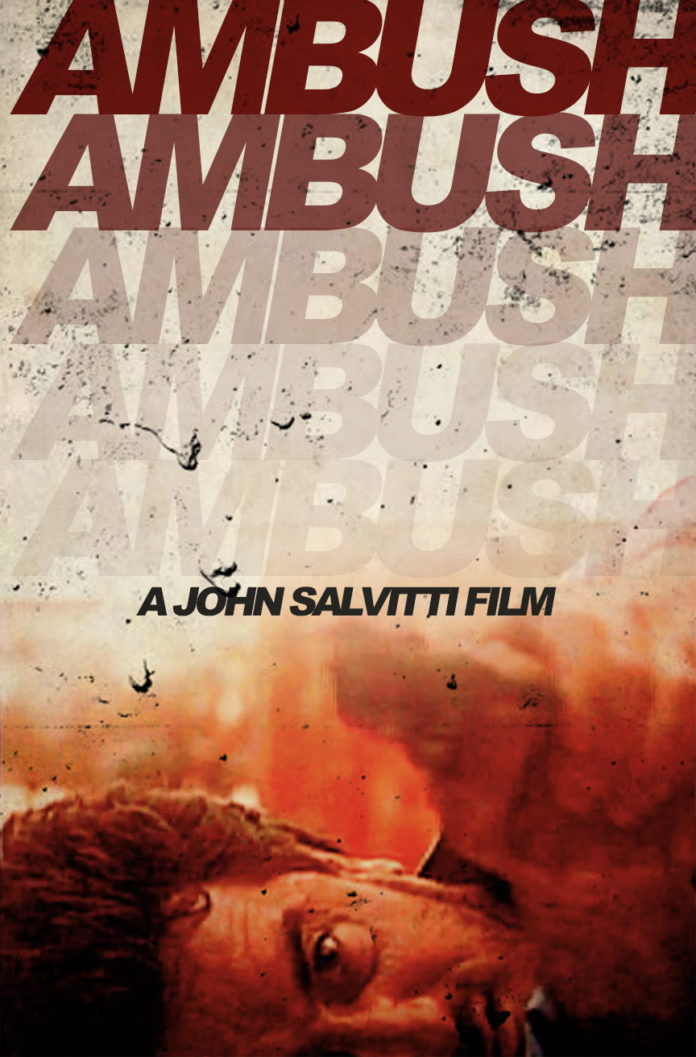 Mike Leeder: Now i think we should begin by clarifying something, that Ambush isn’t a high octane high impact martial arts action movie. How would you describe Ambush, the film, its basic story and what you hope it delivers?

John Salvitti: Thanks Big Mike, full disclosure! Ambush is not a martial arts film, i’d describe it as more of a psychological thriller with some action, gun violence, psychological violence and themes. Despite the title, its really about love, friendship and acceptance between two very different people, maybe a current take on Romeo & Juliet, our male lead suffers from PTSD and Terri our female lead is a transgender woman who is both Cal’s friend and potential love interest.

Cal is on the verge of a lone wolf attack on Hollywood and Terri is the perfect distraction, the friend who wants to help Cal with his illness. Things really take flight when Terri introduces Cal to her doctor who runs Group Therapy that has almost become a radical cult of followers/patients and the techniques the doctor uses in practice are unorthodox, dangerous approaches to mental heath therapy. Cal joins the group and his condition worsens, the voices in his head are heightened and during his Private sessions with the Doctor, the Doctor implores Cal that to exorcise his demons he should follow his violent desires, and the Doctor seems to get some kind of ‘high’ from the sessions and the actions he inspires his patients to take. The voices in Cal’s head get louder everyday and it seems as if the Lone Wolf attack will be inevitiable, but Terri’s presence remains a calming influence on Cal, as he finds his feelings for her growing.

But when Terri is Ambush’ed by some of the Doctor’s patients, its game on! And many questions will be answer, will good triumph over evil? Who will live? Who will die? And who is merely a figment of Cal’s imagination?

Mike Leeder: What was the genesis of the project?

John Salvitti: It’s a long time since the Ambush adventure began! About 20 years ago I made a film called Red Thread, that sat on a shelf as an incomplete work, for so many reasons, missing script pages, scenes that were cut for budget and time restraints. It was a very ambitious idea but it hadn’t turned out the way I wanted. So I decided I wanted to finish what I started, for the sake of everybody involved, we’d all put in a lot of work, but I needed to reset.

Among the challenges I faced was having to reshoot some scenes, shoot additional material, and add voice over and additional characters as well as re-edit the entire film, from the bottom up! Post production would be the biggest challenge as I had to teach myself to edit and learn on the fly as it was self funded. Its some 6 years ago when the process began. I booted up production & just dug in deep. Once I completed putting the movie together, then the real post production began and that also proved to be a battle but I embraced the challenge. So much changed and it felt like a completely different type of story. So I started calling it Ambush!

Cal’s PTSD & Terri being a transgender are at the root of Ambush. Cal hears a constant barrage of voices that almost dare hm to act out violence. Terri plays as the counter effect, she’s peaceful & loving. I drew a lot of inspiration from real people, from real news not fake, but real! Violence against gender is real and I felt it important to show this. Today’s news and the daily barrage of negative headlines also play a role and news effects people. I wanted to show this as well. Marry the two characters & it’s an explosive space to have as subject. I took classes in PTSD & spoke with both Police & trusted military sources to really learn and understand what I was dealing with. PTSD can be silent and then just erupt at any moment, that’s what happens with Cal!

Mike Leeder: How did you find the directing experience (did you also write the screenplay?) Most people would expect a gung ho no holds barred action movie maker, but behind the macho there is shal we say a very passionate, very emotional film-maker. Is it sometimes hard for you to find that balence between the martial and the arts?

John Salvitti: Well Big Mike, you know it truly does take a village so that’s my honor! Be one in the village who does his best and stays in his lane. It’s love of teamwork & art that inspires me to battle! Seeing the finished product on screen really is magical. Maybe its the martial artist in me, but I love to serve the art and the team, the whole film-making process. Be it writing or directing, I’m really enjoying the process and just look forward to working with directors who know me and trust what I do.

And that’s what brings me to what’s next. I’m definitely ready now for the next full blown epic martial art in cinema challenge. I’m smoldering like the charcoal and the work is actually happening right now as I’m honored to be part of an amazing, and I mean amazing team here in Hollywood. The goal is raising the bar, anything less is unacceptable really. That’s where we are at.

Described as ‘Fight Club’ meets ‘Death Wish’, the film follows “KAL, a visitor to LA suffering from PTSD and on the verge of carrying out a lone wolf attack, only first he must rescue his girlfriend from her assailants. Question is, who lives, who dies & who was merely a fragment of ones imagination?” The story lets fly on issues we see everyday in today’s media. A constant barrage of violence, shootings, bullying and political tensions. Issues that are so burdensome they are driving some to engage in violence.

Salvitti also wrote the script and edited the film himself which will deliver more on phycological gun violence more so than martial arts style action. “It’s sort of in the vein of ‘Fight Club’ with the PTSD & split personality” stated Salvitti, “I really wanted to explore why & what goes on in the mind of a troubled common man suffering with societal PTSD and hearing voices telling him to engage violence. The demons scream in his head, insulting him, bully him and imploring him on to engage the violence. The plan is delayed when KAL’S unsuspecting girlfriend Terri is assaulted and Kal is now forced to intervene. Word to the weary. “See something say something.”