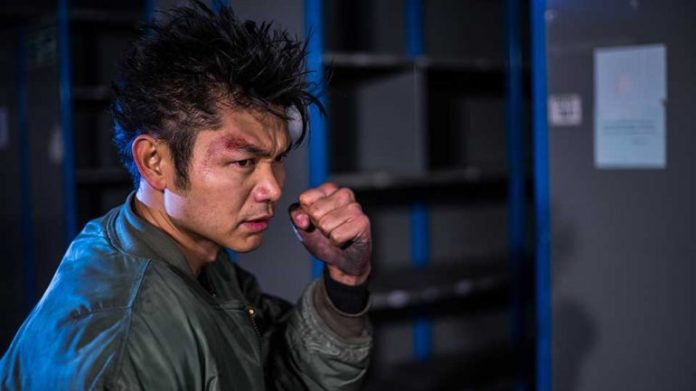 Straddling a fine line between pulpy british gangster flick and a black comedy with gruesome kills, Nightshooters is ‘Die Hard’ by way of some TNT infused ‘Home Alone’ pranks, complete with a brief zombie/action movie send up and some blistering martial arts fighting.

Best known for his turn in the breakout hit Jailbreak (Jimmy Henderson, 2017), Jean-Paul Ly is the main interest/reason for action aficionados to venture here. While otherwise a mediocre movie, it features a fantastic fight scene (action coordinator: Esa W. Sie) which tries to solve some problems regarding internal rhythm, overall timing and more specifically the old “people stand around waiting for their turn” dilemma in many-on-many fight scenes.

Here together with stunt coordinators Tom Cotton and Donovan Louie, Jean-Paul Ly continues to work out some chinks concerning this with a great one-on-many and a couple of two-on-one fights. There is tremendous work done here with what surely must be a scarce amount of time and money. The limited setting puts focus on the fighters and choreography. There are some strands of both Jackie Chan and Sammo Hung here, in the details, if minimal use of props, how to work with multiple attackers and use of space. Ambitious and worthwhile, only let down somewhat by the sometimes cruel tone and a weak main bad guy.

Jean-Paul is not presented as the stoic, tough, manly hero but with a more down to earth, likeable, and soft approach. It might be too early to say if he will become just bland or something more sympathetic. In movement, he has a loose and easy feel while still measured and hard-hitting. His work in action seems to be an ambitious endeavour worth following.

For what must be a very modest budget, Nightshooters is a revelation. Overall it moves at a fluid pace, looks good and above all is very well acted by mostly everyone involved. The orchestral score with its blaring horns is also a surprising welcome.

Director, writer Marc Price does get a bit too in love with his own writing, letting some monologues/dialogues rattle on and grind proceedings to a halt. In the end it makes the movie a tad longer than welcome and not as smooth as it could have been. However, if smart ass gangster motor mouths resurrected from the 90s is your thing?

Go ahead, you will love it. If not, give it a try anyway. You will be entertained.