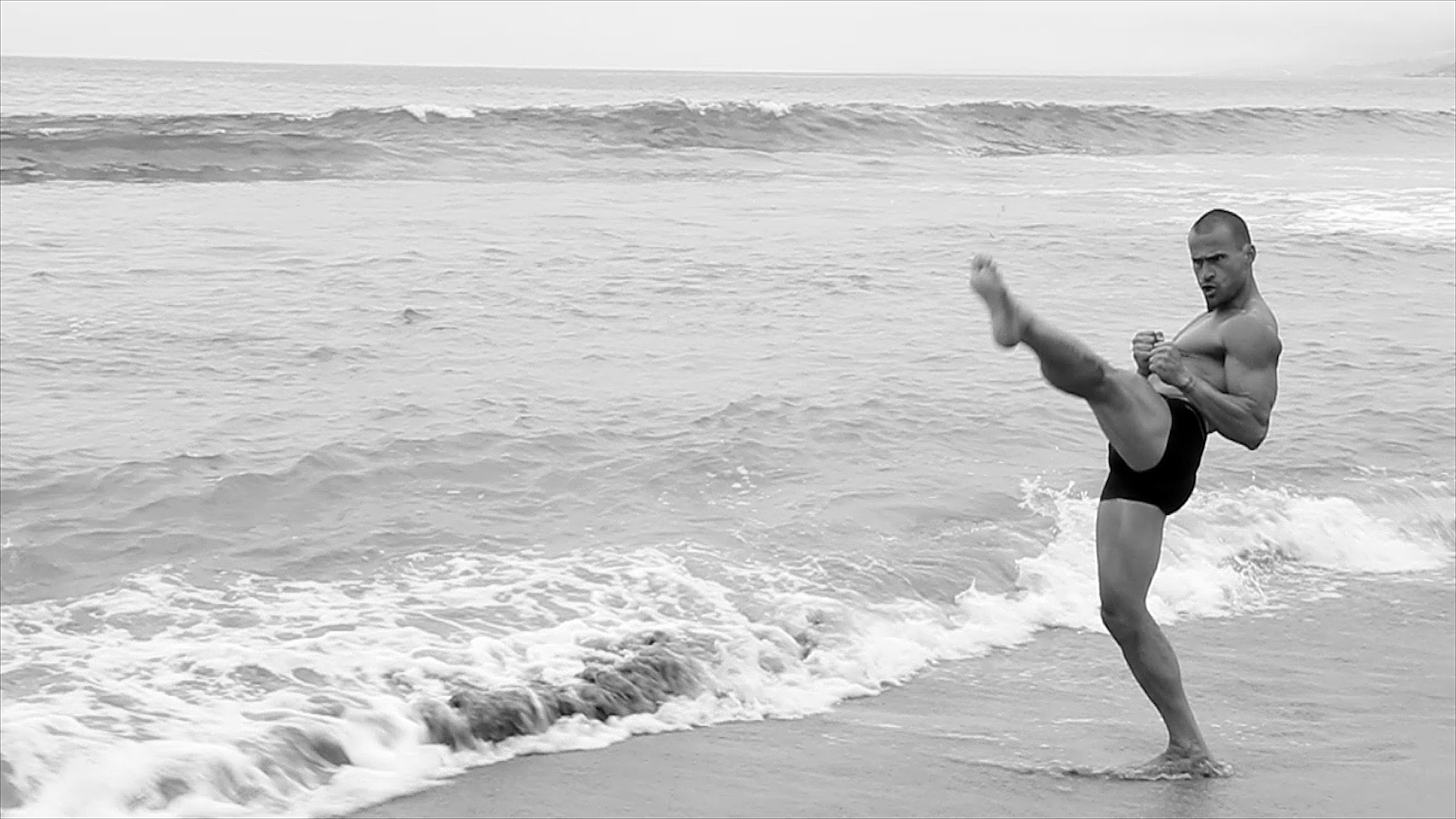 MAAC was recently reached out by fitness training expert and aspiring martial arts star JULIEN GREAUX to talk about his upcoming project and learn a bit about the potential “Next Big Thing In Hollywood”! Julien currently lives in California where he dreams of following the footsteps of JEAN-CLAUDE VAN DAMME and JASON STATHAM to become a star in action films. He recently self-produced a short film titled PARABELLUM, which he hopes will springboard him to more opportunities with major Hollywood studios. 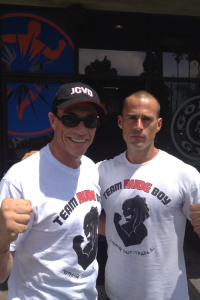 Without further ado, here is our interview:

MAAC: Hi Julien, thank you for reaching out to us and giving us this opportunity to get to know you. Can you start off by telling us a bit about your background and how you got involved with martial arts?

JULIEN GREAUX: Hi I started martial arts when I was 7 years old, I started with judo. I lived on a military based with my parents and my brother in Africa, IVORY COAST. So my dad kind of just put me in it. Since than I have been practicing, it’s been 30 years. I mainly train for standup, KARATE SHOTOKAN and MUAY THAI. 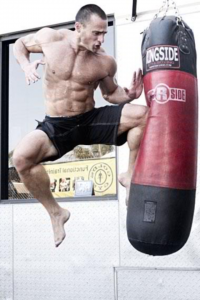 MAAC: What made you decide to transition into acting?

JULIEN GREAUX: Since I started karate I wanted to be in action movies, I was 9 years when my parents divorced so I was looking for a father figure. So my plans was to train super hard, martial arts and weight training . To build a body with skills than from there make the move. Before making the moves into acting I had to prove that I was a good “PRODUCT” so I focused first on media, magazines, covers, I have been on over 50 international covers such as men’s health, men’s fitness, karate BUSHIDO. That NOW is the next step ACTING. 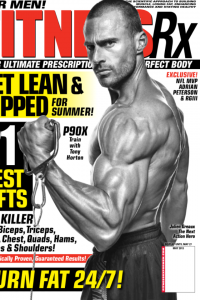 MAAC: Who are some of the actors that you look up to and try to model your career after?

JULIEN GREAUX: Of course BRUCE LEE, just because he was Asian and at the time it was IMPOSSIBLE to be a super hero if you were Chinese. You see I’m French so in HOLLYWOOD French are BAD or ROMANTIC, so I want to be the first French BADASS on the silver screen. Also I love CLINT EASTWOOD for everything he have done, and for his CHARISMA.

MAAC: Off the top of your head, what are your top 5 favorite martial arts flicks of all times?

MAAC: Can you tell us a bit about the film that you just finished called PARABELLUM?

JULIEN GREAUX: Well I wrote it, produced it, I did the cast and wrote the movie for myself to play the lead. The movie is directed by two very talented French director MICHAEL FEENIX and PASQUALE PAGUANO. The big problem in HOLLYWOOD for foreigners is that there’s not so many parts we can play because of our accent. So I did try few auditions but quickly realized that if I wanted to make my big break I had to do it myself and showcase myself in the best way. I can’t tell you the exact story, but. It’s the story about a French guy coming to LA to build a new life. 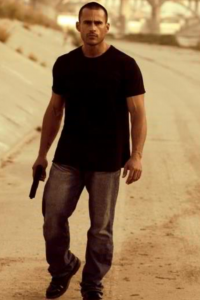 MAAC: How would you describe the action in this film? What style of martial arts is featured?

JULIEN GREAUX: When you are NEW in the business you have to bring your own style, you don’t want to copy anybody. To many people try to hard to copy, there’s only ONE Tony Jaa no matter how many backflips you can do. My style I will say is more brutal, one punch, one kick. So it’s a big mix but I want to keep my style as real as possible, meaning that me too I get hit. 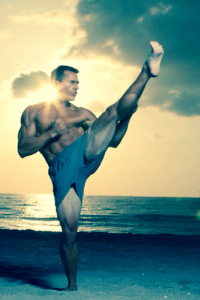 MAAC: Did you go through any special training to play this role? 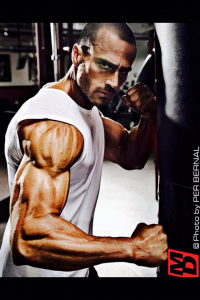 MAAC: When can we expect a trailer and a release date for this film?

JULIEN GREAUX: For the date I’m not sure, but hopefully a trailer in couple of months.

MAAC: If you have the power to choose your next co-star, who are you dying to work with?

JULIEN GREAUX: A guy or a girl? JK, I don’t know for some reason I keep having that vision about being in a movie with RUSSELL CROWE, him playing the bad guy.

MAAC: What would be your advice to fellow martial artists who would like to break into acting?

JULIEN GREAUX: First it’s having the PASSION, no matter what never give up on your PASSION. You don’t need to be the best of the best by winning tournaments if acting is your goal. You can be a very very good martial artist wen without competing, bring the whole package, physique, skills, acting. There’s so many guys waiting in line to take your place, be ready 24 – 7. Believe in yourself no matter what people are telling but be honest with your self, if for example you are not in great shape, accept the critics than move your butt to the gym and start training like a MAD MAN, and be yourself always. Do not loose yourself by trying to copy somebody else. 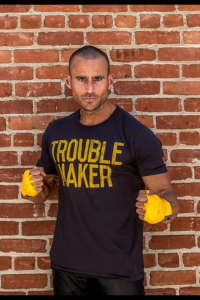 MAAC: What’s your message for readers of MAAC and martial arts action cinema fans around the world?

JULIEN GREAUX: First thanks for that great opportunity with that interview. I would like them to know that my main goal in life is to inspire people to show them that no matter what you have in mind you can achieve it, have a clear vision on where you want to go in life. I hope trough my movie to inspire the new generation. THANK YOU SO MUCH. I would also like to say thank you to my mom for believing in me and supporting me since the beginning. ACTION – REACTION JULIEN ps: I would like to say thank you to my sponsor GAT for believing in my potential, you can reach me on FB JULIEN GREAUX. 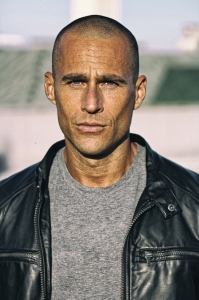 Once again, MAAC would like to thank JULIEN GREAUX for the interview and we wish him the BEST OF LUCK with his future projects!