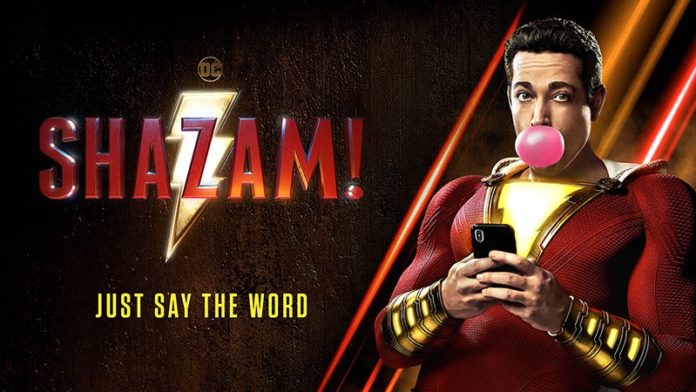 After a few rocky years that saw the releases of Batman VS Superman (2016) and Suicide Squad (2016), the DCU finally seems to be back on track. Although Justice League (2017) was met with mixed reviews, both Wonder Woman (2017) and Aquaman (2018) proved to be both financial and critical successes.

Their winning streak continues with Shazam!, a wonderfully light hearted superhero movie that stands out from the crowd of other recent blockbusters by taking a more family adventure approach, harkening back to the films of the 80’s, most notably Big (1988).

Shazam! opens with the introduction of young Thaddeus Sivana, who finds himself transported to the Rock of Eternity. There he meets the ancient wizard Shazam (Djimon Hounsou). Shazam has spent thousands of years searching for a true champion, one who is “pure of heart”, after his last champion went mad and decided to unleash the Seven Deadly Sins on the earth.

Unfortunately, Sivana finds himself tempted by the Eye of Sin, which would allow the Sins to become free. Shazam deems Thaddeus unworthy of his power and sends him back to earth.

During this time, we find out that the now adult Sivana (Mark Strong) has become obsessed with returning to the Rock of Eternity. Sivanna finally finds a way to return and allows himself to become the vessel of the Sins, with Shazam being powerless to stop him. The wizard has no choice but to grant his powers to a new champion, with him choosing Billy. Once Billy says the wizard’s name, he transforms into an adult superhero (Zachary Levi).

At first, Billy sees his powers as a great way to become famous and make money before realizing that there is more at stake than just him having fun, with him now having to stand up to the now powerful Sivana.

Director David S. Sandberg does well behind the camera. Stepping away from the colour pallet favoured by previous DC movies, Shazam! is bright and bold; being more in line with the comics that gave birth to the character.

This is Sandberg’s largest film to date, with his previous two movies being small scale horror. Both Lights Out (2016) and Annabelle: Creation (2017) showed that he had definite skills behind the camera, as well as being able to work with a low budget. Lights Out in particular was made on a $5 million budget.

He does not have to worry about budget constraints this time, with Shazam! reportedly costing $80 – $100 million to make. Although decidedly lower than other DC movies, it is a major increase on what Sandberg normally works with.

The money is clearly on the screen, with Shazam! being filled with terrific special effects as well as a number of exciting action scenes. However, unlike previous DC movies, the action scenes are of a smaller scale, which is commendable. There are only so many times you can watch super heroes destroy cities before you get bored.

Surprisingly the action is more violent than expected. Although there is not anything totally excessive, there were a few heads being ripped from peoples shoulders that was unexpected.

Another aspect setting it apart from other superhero movies is that Sandberg focuses as much on the family dynamics of the story than the expected super powered heroics. Each family member gets a chance to shine, even though the primary focus of the film is the friendship between Billy and his foster brother Freddy (Jack Dylan).

Clearly set in the same world as other DCU movies, with references to Superman, Batman and Aquaman being included, Sandberg also throws in some shout outs to his own movies with Andi Osho making an appearance as the same Social Worker she played in Lights Out. Also keep your eyes peeled for a familiar looking doll.

The script by Henry Gayden is at times hilarious and heartfelt. The script also takes some dark dramatic turns in regards to Billy’s domestic situation which sets it apart from typical family fare.

Performance wise, both Asher Angel and Zachary Levi are terrific as Billy, with Levi in particular having great fun at portraying the wonder and enthusiasm of a fifteen year old boy who suddenly finds himself in the body of a superhero. The two easily make you believe they are both the same character.

Shazam! should be a career changer for Levi, with him up to this point probably being best known for television show Chuck (2007). The same should be true for Angel, who has mostly worked in television up till this point. Shazam! should lead to other feature work for the talented young actor.

Mark Strong always makes for an imposing villain, and is certainly better served here than he was in Green Lantern (2011). Strong is able to add some gravitas to his role, making Sivana more than the underwritten villain he could be. His back story with his uncaring father is interesting, but it is just a shame there was not more of this included, especially when his father is played by the terrific John Glover.

Of the supporting cast, the main standout was Jack Dylan Grazer as Freddy. His character is essential, as he is essentially Billy’s moral compass and helps keep him in line to becoming a true hero. He had already proven to be a scene stealer with his performance in IT (2017), so it is no surprise he does the same here.

The likes of Djimon Hounsou, Faithe Herman, Grace Fulton manage to impress with the limited screen time they are given. In addition, there are some surprising appearances that I would not want to spoil.

Shazam! is another step in the right director for the DCU and is tailor made for comic book movie fans, as well as those brought up on the films of Amblin entertainment.