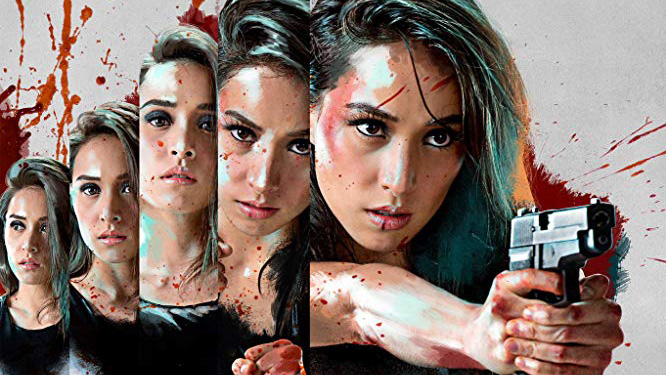 Directed by Pedring Lopez, the slightly exploitation infused female fury flick Maria goes for a time tested set-up. Cristine Reyes stars as Maria, a retired assassin whose past is catching up to her. Living a happy family life, apart from the hubby being a bit too engaged in politics and neglecting his family. Gangsters are also being too engaged in politics and plan to assassin a politician, which lead to them crossing paths with Maria. Gangster Kaleb (Germaine De Leon) recognizes his former employee/lover and wants to kill her and her family.

Cristine Reyes is a B-action movie heroine revelation, carrying the emotional and the physical scenes with ease whether they be gritty knife fights, hand to hand combat or run and gun battles. She gets worn down, tired, sweaty and bloody and echoes a hollowness left after losing everything.

Structurally clumsy political allegory and trite gangster tropes clash with portrayal of happy family life. Introducing way too many uninteresting characters and plots that go nowhere. After a prolonged set-up with these two parallel strands, one consisting of torture scenes and exposition, the other of breakfasts and jolly good family time, we do get to the action.

Maria, the movie, has clearly trouble focusing on the elements that do work, mainly Maria, the character. Some knowing use of B-action cinema variations (high-heels, showers, henchwomen), but most importantly the shoot-outs and beatdowns. These fights are shot with a clean, B-movie style and moody lighting, but are severely hampered by intrusive and awful music.

Fight Choreographer Sonny Sison (BuyBust) shows progress here. While less ambitious than BuyBust, these B-film scuffles are well done and unlike the rushed rehearsal feel of the aforementioned film, actually work. Fashioning slightly more complex choreography with some long unbroken takes and above all, hits that land harder, his work is in service of strong performers giving it their all.

Of special mention is henchwoman Miru (actress/musician/martial artist/athlete Jennifer Lee), in a small but memorable role as a Terminator type character going after Maria. With attitude and energy she looks to measure herself and could have easily had a bigger part.

Maria would have benefited immensely from actually knowing what it is or could have been. There is a slog of a gangster movie here slightly obfuscating a worthy bit of trashy and gritty B-action pulp. The movie Maria overshadowing the character of Maria. There are moments here to salvage worthy of consideration and Cristine Reyes is a certified action movie star in the making. Armed with rifles, shotguns and knives, she rushes and pummels bad guys left and right. It is refreshing seeing a female lead and a couple of henchwomen in one of these more unassuming B-action movies, not making such a fuss about it, they just beat and shoot sh*t up and afterwards go to the motel and take a classic 80’s action cinema shower.