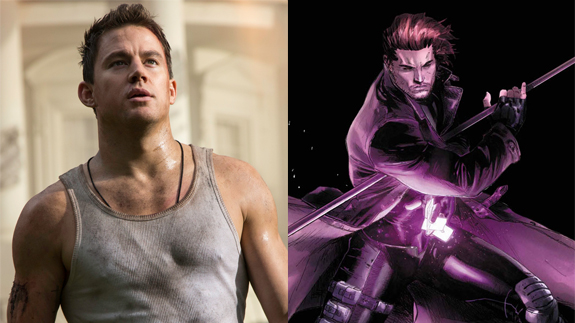 UPDATE: We can all officially stop holding our breath now for the long in-development Gambit movie. The troubled project was previously set for a release in March 13, 2020, which was never a realistic date with still no director attached.

Now it looks like Disney has finally put the final nail in the coffin. The mouse house made an announcement today regarding release dates of their upcoming projects and Gambit was totally removed from their upcoming schedule.

Sigh…it’s time to officially move on after all these years of development hell.

“When you look at Gambit, he’s a hustler and a womanizer and we just felt like there was an attitude, a swagger to him, that lent itself to romantic comedy. You know, when I say romantic comedy, I use that term loosely, in the same term that I use the term western for Logan loosely. It’s not like they’re gunslingers at high noon in Logan. It’s just a vibe. And I would say the vibe of Gambit has a romantic or sex comedy vibe to it. While it is also still very much a superhero movie with villains and heroes, as all these movies are.”

UPDATE: According to GWW there is rumors swirling that production on the long awaited ‘Gambit’ film may finally start on February 15th, 2019 in New Orleans, Louisiana. Please take this with a grain of salt as a search for a director is still on-going.

Cross your fingers and stay tuned.

UPDATE: Here we go again. Director GORE VERBINSKI has officially dropped out due to scheduling conflict. This marks the third time GAMBIT has lost its director. A search for a replacement is currently underway with the release date now pushed back to June 7, 2019.

UPDATE: After two previous directors dropped out, maybe third time’s the charm. Best known for his ‘Pirates Of The Caribbean’ films, director GORE VERBINSKI is in talks to helm GAMBIT.

With the recent rumor of Daniel Craig joining the cast and a director potentially found, it seems like ‘Gambit’ is finally back on track after years in development hell.

UPDATE: There seem to be some new traction on the film as none other than ‘James Bond’ himself DANIEL CRAIG (Spectre) is in early talks to take on the role of ‘Mr. Sinister’!

SPLASHREPORTS stated: “THERE ARE “CONVERSATIONS” ABOUT LOCKING UP DANIEL CRAIG TO BE NATHANIEL ESSEX, A.K.A. MR. SINISTER IN GAMBIT AND ALSO IN OTHER X-MEN MOVIES.”

‘Nathaniel Essex’ aka ‘Mr. Sinister’ is born in Victorian London who is a genetically altered human with superhuman physical and mental abilities. The character is able to manipulate the minds of others in various ways telepathically, and is capable of energy projection through telekinesis.

Details of the ‘Gambit’ script reveals the plot as follows: “Gambit is hired to do a job in Paris in which he has to steal something from the Louvre Museum. His mysterious employer is revealed to be Nathaniel Essex a.k.a. Mr. Sinister. He offers Gambit 40 million to recover a mysterious trunk that was stolen by the Boudreaux clan. It will be auctioned off during the yearly Thieves Ball where all the criminal organizations in the world meet up. It uses New Orleans’ Mardi Gras celebrations as a cover. Gambit decides to enlist a crew of mutants to pull off this seemingly impossible heist…”

UPDATE: Looks like the film have lost its director AGAIN. DOUG LIMAN have officially dropped out of the project in a “mutual parting of ways.”

‘Gambit’ production schedule is now up in the air.

Who do you think should take over behind the camera? My vote is for GARETH EVANS (The Raid). The man deserves a shot at a big Hollywood project.

UPDATE: The production start date have been delayed due to re-writes on the script. Instead of March, ‘Gambit’ is targeted to start shooting at the end of this year.

In the meantime, director DOUG LIMAN will move on to another project (The Wall) before taking on ‘Gambit’.

UPDATE: ‘Gambit’ is officially set to start production in New Orleans this March with DOUG LIMAN (Edge Of Tomorrow, The Bourne Identity) confirmed to direct.

The film was previously targeted for a October 7th, 2016 release, but with production barely starting in March, it is highly likely that the release date will be pushed back.

UPDATE: It is looking more and more likely that director DOUG LIMAN (The Bourne Identity) will be helming GAMBIT! According to THE HOLLYWOOD REPORTER Liman is now in the final negotiations stage to officially direct the film.

UPDATE: According to COMICBOOK.COM ‘The Bourne Identity’ director DOUG LIMAN is being sought after to helm GAMBIT! No stranger to big action blockbusters, Liman have directed such hits as ‘Mr. And Mrs. Smith’, ‘Jumper’, and of course ‘Edge Of Tomorrow’.

UPDATE: According to THE HOLLYWOOD REPORTER director RUPERT WYATT have officially dropped out due to scheduling conflict. Wyatt released this statement:

“I was very much looking forward to working with my friend Channing and the team at Fox, but regrettably a push in the start date now conflicts with another project. I thank them for the opportunity, and I know that Gambit will make a terrific film.”

UPDATE: Despite recent rumors about him exiting the project, reports via THE HOLLYWOOD REPORTER confirms that CHANNING TATUM have officially signed the deal with FOX to star and produce GAMBIT!

The film goes into production this Fall.

UPDATE: According to THE WRAP Channing Tatum may be exiting the project due to unspecified reasons. Apparently Tatum’s reps are still in “active discussions” with the studio but nothing is finalized. With no lead actor officially signed, the planned Fall production start date may just have to be delayed.

IF Tatum does drop out, who do you guys think should step into the role? Here is an idea, why not just bring back TAYLOR KITSCH who did a pretty decent job portraying ‘Gambit’ in 2009’s ‘X-Men Origins: Wolverine’.

UPDATE: So much for this being a “lower” budget film compared to previous X-flicks. According to COMICBOOK.COM ‘Gambit’ will have an estimated production budget of $150+ million!

The film starts production in New Orleans, Louisiana this Fall.

UPDATE: GAMBIT have finally found a director in RUPERT WYATT (Rise Of The Planets Of The Apes). How do you feel about this choice considering many other high-profile directors have turned down the project including The Raid’s Gareth Evans? Comment below!

UPDATE: 20th Century Fox have announced the release date for GAMBIT starring CHANNING TATUM. The ragin’ cajun will make his feature debut on the big screen on October 7, 2016!

UPDATE: 20th Century Fox has picked up ROBOCOP co-writer JOSH ZETUMER to work on the script for the upcoming GAMBIT movie! Tatum’s version of ‘Gambit’ is expected to debut in 2016’s X-MEN: APOCALYPSE.

When asked to elaborate on what makes Tatum right for the role, Shuler Donner said, “Well you know, he’s a rogue — Channing — he’s a rascal, just like Remy LeBeau, and he can handle the action, we all know that! And he’s got a really good heart. He’ll be great for Gambit,” she added, “and he’s a Southerner, too! He’s not from New Orleans, but he is a Southerner, and he understands that world.”

‘Gambit’ will be introduced in ‘X-Men: Apocalypse’, the follow-up to the soon to be release ‘X-Men: Days Of Future Past’. After that he will most likely get his own spin-off film.

How do you guys feel about this casting news? Do you think they should have given TAYLOR KITSCH, who played ‘Gambit’ in ‘X-Men Origins: Wolverine’, a second chance? Or was this a good move to have Channing take over the role?

UPDATE: CHANNING TATUM recently set down with MTV and spoke a bit about the possibility for a GAMBIT standalone film:

“Creatively, we’re starting to chug forward. Obviously there’s nothing [official]. There are only conversations and dreams right now, really. I’ve been pretty vocal about wanting to be the part of Gambit for a very long time. It’s a weird, pinching-myself moment that we’re even having the conversation. We’ve talked about it being a standalone, first, and actually trying to change the ‘hero, superhero movie.’ Because Gambit is not your typical hero. He’s a thief. He walks on the gray. I’m hoping we can change it a little bit, and then ultimately feather into the other ones. The machine of the Marvel world is so ginormous that it’s literally like climbing a mountain, getting one of these movies made, and all of the pieces that go along with it.”