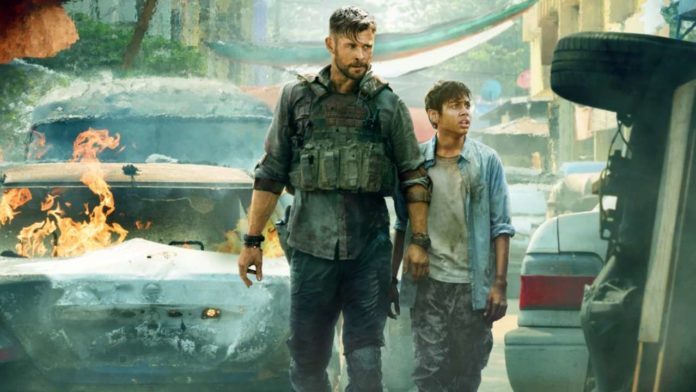 Blockbuster kings the Russo Brothers have struck gold yet again, this time with Netflix actioner Extraction. Based on Joe Russo’s own comic book Ciudad, Extraction is exactly what the doctor ordered in these uncertain times, being jam packed with expertly choreographed action scenes and featuring a terrific lead performance from Chris Hemsworth (Thor).

There have been some complaints that the film promotes a “white saviour”, but this should be overlooked for what is mostly a straightforward action thriller. Like a 1980’s throwback, the film’s plot is a perfectly simple excuse to string along the action set pieces.

After the kidnapping of Ovi (Rudhraksh Jaiswal) an Indian drug lord’s son, mercenary Tyler Rake (Chris Hemsworth) is hired to rescue him. Throw in a double cross to keep things exciting and that’s pretty much it. But to be honest, that’s all a film like this really needs.

Further proof in how the plot is secondary in a film like this is the fact that the South American location of the comic could be so easily changed to Bangladesh without any real alteration to the main story needed.

Like last year’s 21 Bridges, the Russo Brothers are mostly acting as producers with the directing reigns being handed over to stunt extraordinaire Sam Hargrave. For the last few years Hargrave has been the Russo brothers secret weapon, carrying out stunt and fight choreography on the likes of Captain America: The Winter Soldier (2014) and Avengers: Infinity War (2018).

Away from the Russo’s, his work can be seen in such hits as Atomic Blonde (2017) and Wolf Warrior 2 (2017), where he got to work alongside martial arts legend Wu Jing.

With all his experience and skill with action it makes sense that he be given the opportunity to helm his own feature. Thankfully he doesn’t disappoint, with Extraction proving to be a terrific showcase for his talent.

Of late it would seem that the best action movies are being directed by stunt coordinators turned directors. The likes of David Leitch (Hobbs & Shaw), Chad Stahelski (John Wick) and Jesse V. Johnson (Triple Threat) all started out with stunts before going on to become the best action movie directors currently working today. We can now gladly add Hargrave to this list.

As expected from Hargrave the action scenes are first class and suitably violent. With this being a Netflix release there was clearly less concern about trying to make it a PG-13 like so many other modern day actioners. The film’s R rating is well earned.

While the action slows down slightly at the midway point it isn’t long until the audience is treated to another shootout or hand to hand knockdown.

The standout is an uninterrupted 12 minute take which has Hemsworth and Jaiswal trying to escape Dhaka, with Hemsworth having to take on what seems like the entire Bangladesh army.

While it’s clear the scene is digitally manipulated to appear like one take, the action is no less impressive. I noted a couple of reviewers commenting on the obviousness of the joins but seemed to have no issue when Sam Mendes did the same for 1917 (2019) last year, which too had some extremely obvious transitions in order to appear uninterrupted.

The action is beautifully captured by ace director of photography Newton Thomas Sigel. At no point will the audience be confused by what’s happening on screen, with the action being clear and precise. While Sigel’s work behind the camera may not be of the same calibre as his earlier work on Drive (2011), it is still of an exceptionally high quality.

No matter how good an action director is, it doesn’t amount to much if you don’t have a dedicated lead. Hemsworth is terrific as the conflicted Tyler Rake (an action hero name if I ever heard one), giving John Wick a run for his money in the amount of bodies he manages to rack up. While he is mostly in full on action hero mode, Hemsworth still gets a chance to flex those acting muscles with one particularly poignant scene where he emotionally recounts the death of his son to the young Jaiswal.

However, Hemsworth isn’t our only hero. Randeep Hooda also makes a great impression as Saju, who may seem like a villain at first but has a much more honourable reason for his actions than Rake. Hooda may not be instantly recognisable to Western viewers but he has appeared in his fair share of Indian blockbusters, most notably the likes of Kick (2014), Baaghi 2 (2018) and the upcoming Radhe (2020). Hopefully his work in Extraction will open him up to a wider audience.

The remainder of the cast only have limited screen time. Priyanshu Painyuli is disgustingly vile as drug kingpin Amir but only appears fleetingly. The same is true of Golshifteh Farahani as Nik, Rake’s fellow mercenary, although she at least gets involved in the action during the finale. David Harbour does what he can with an extended cameo, but this is really Hemsworth and to a lesser extent Hooda’s show.

Viewers should also keep an eye out for director Sam Hargrave, who clearly wasn’t happy just working behind the camera, appearing as a Sniper in Hemsworth’s team.

Extraction is a frenetic and action packed thrill ride that while not perfect should make up for the lack of any recent big screen releases. Other than some poor CGI, Extraction is on par with anything that would normally be released in cinemas.