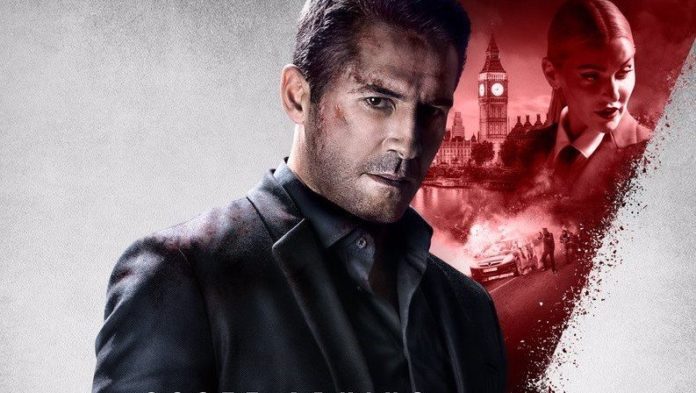 The recently released Legacy of Lies marks a slight change of pace for leading man Scott Adkins. Sure there are the expected martial arts and gun battles but they are more evenly spaced than previous Adkins movies with Legacy of Lies being more of an espionage thriller than a full on action movie.

Confidently directed by Adrian Bol, with this being his first time behind the camera in 12 years, Legacy of Lies focuses on ex MI6 agent Martin Baxter (Scott Adkins) who after a failed mission 12 years ago has been living off the grid. His only companion on his journey is his young daughter Lisa (Honor Kneafsey), who is starting to become frustrated with living constantly on the move.

In order to make ends meet, Martin makes money by taking part in underground fights and working as a bouncer. It is through his job as a bouncer that he is sought out by young journalist Sacha (Yuliia Sobol) who wants his help in finding files linked to his mission of 12 years ago.

To make things more difficult, Martin’s daughter is kidnapped by the KGB who want him to betray Sacha and give them the files in return for his daughter’s life. He also has to contend with the CIA who have their own reasons for wanting the files.

Considering the length of time between his previous feature and Legacy of Lies, Adrian Bol shows no signs of rust. He gets things off to a great start with a tensely staged shootout in an old Ukranian bus factory before moving the action to London. Here we get to see the toll the failed mission has had on Martin’s life and how he is still struggling with his own demons.

Bol gives the film a lovely professional sheen that betrays the films decidedly low budget. This is certainly one of Adkins more professional looking features outside of his work with Jesse V. Johnson.

Bol doesn’t get everything perfect however, with him letting the pace lag in the second half of the film. While the first half of the film has its fair share of action scenes, these begin to tail off as the film builds towards the climax. Normally this is where this type of film would feature its largest action scenes, but the finale is disappointingly small in comparison to what came earlier.

There is also a last minute scene that just felt unnecessary but does set the film up for a sequel which wouldn’t be unwelcome.

Still, these minor drawbacks are not enough to ruin the film, with Bol getting enough right to make Legacy of Lies a worthwhile experience. Having also written the script, Bol gives Adkins one of the better characters he has been given a chance to play. Martin has considerable depth in comparison to some of your typical DTV heroes, even some played by Adkins himself.

As expected, Adkins gives the role his all. Martin has a lot of issues, and although we are shown his love for his daughter he isn’t exactly what one would consider a good father. Constantly popping pills and going with prostitutes, it is clear Martin has problems. With the emergence of Sacha it gives him a chance to get back some of his self respect and become the man that he used to be.

I think a lot of the time people overlook Adkins acting talent and focus more on his martial arts skills. It is clear that he has certainly improved as an actor as his career has progressed, with his recent turn in Avengement (2019) proving how far he has become. His role here may not be as memorable as his work in Avengement but it is another in a long line of quality performances from Adkins.

Of course, those who tune in to see his martial arts skills will certainly be entertained. The majority of the fight scenes are short and sharp other than his one on one fight with Leon Sua. Their fight is the real action highlight of the movie and is up there with some of Adkins best fight scenes.

Unsurprisingly Adkins brought on fight choreographer extraordinaire Tim Man to overlook the fight scenes. Man has choreographed some of the best Adkins fights as evidenced in Accident Man (2018) and Triple Threat (2019) to name just a couple. Adkins has commented in the past how he feels Man brings out the best in him, which he does once again in Legacy of Lies. I look forward to their further collaborations.

Of the rest of the cast, young Honor Kneafsey makes an impression as Martin’s young daughter Lisa. At first I did think she was going to be one of those annoying movie kids, being 12 years old but acting 40, but she brings a lot of heart to proceedings.

I especially liked her scenes with captor Tatyana (Anna Butkevich), with the two of them building up an uneasy relationship. Butkevich adds some depth to these scenes with it being clear how uncomfortable she is having to kidnap a young girl but still willing to do what she feels needs to be done.

Yuliia Sobol also does well, with her sharing most of her scenes with Adkins. The two of them make quite the partnership even if neither of them trusts the other.

While it does have some drawbacks that stop it from becoming an action classic, there is still plenty here to enjoy. Legacy of Lies is another in a long line of quality Adkins productions as well as being a fine calling card for director Adrian Bol.

This film marks the second starring vehicle from Adkins since lockdown began. We should all be thankful that he is the hardest working man in action cinema. Adkins already had a number of films already in the can that have been able to be released to entertain us in what has otherwise been a miserable year. We still have The Intergalactic Adventures of Max Cloud (2020) to look forward to.