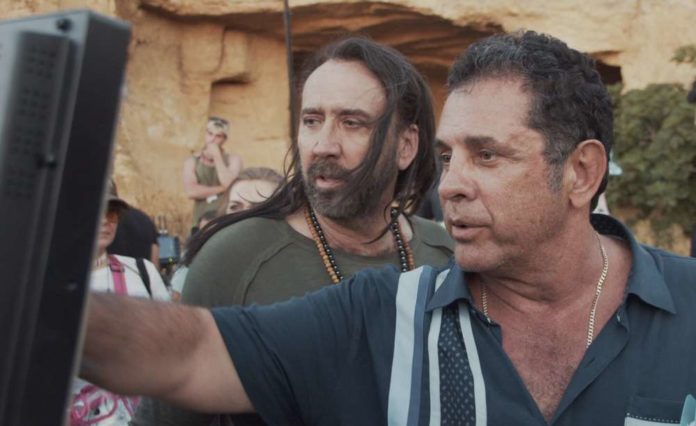 MAAC: Hello Dimitri, thank you so much for setting aside some time with MAAC today. If we’re not mistaken, Jiu Jitsu is based on a comic book that you created. For those unfamiliar with the comic, can you give us a brief description of the film and what inspired you to come up with such a unique story?

Dimitri Logothetis: Jiu Jitsu is the story of Jake Barnes, a Jiu Jitsu master who has lost his memory and has to reunite with his team of Jiu Jitsu fighters to defeat Brax, the fearsome alien which comes to Earth every 6 years, when a comet passes by the earth and opens a portal. Then Brax appears to do battle with the best Jiu Jitsu warriors the earth has to offer. After making Kickboxer: Vengeance and Kickboxer: Retaliation, I wanted to try to ignite a new sci-fi martial arts franchise as I have always thought that a combination of genres opens up the possibilities and allows me to raise the stakes, and bring wild practical martial arts, along with visual effects, on top of the jaw-dropping martial arts action I have become known for.

MAAC: How was it to reunite with Kickboxer: Retaliation star Alain Moussi? This is the third film you guys have worked on together (including Kickboxer: Vengeance as a producer), you must have great chemistry.

Dimitri Logothetis: It’s always a pleasure to work with Alain. Having an all-time great martial arts performer and 6th degree Jiu Jitsu master, in our leading role is a dream for me as a director. It allows me to work really quickly without having to shoot every scene twice, once with the actor, and then again with the stunt team. Alain is unbelievably accurate with the choreography and has superhuman endurance on top of his world-class martial arts and acrobatic abilities. Beyond that, he has become a really capable actor, and I think he shines in this movie, particularly when he gets to play off great actors like Nicolas Cage, Rick Yune, and Marie Avgeropoulos. Finally, and most importantly for my sanity on set, he is one of the nicest guys I know and really goes out of the way to lift the spirits of everyone around him, which is invaluable on a film set. Particularly one as challenging as Jiu Jitsu.

MAAC: Is it true that Tony Jaa was originally offered a role in Kickboxer: Vengeance but scheduling conflict got in the way? It’s great that you guys manage to get him on-board this time around with Jiu Jitsu. Will fans get to see a Moussi vs Jaa showdown?

Dimitri Logothetis: We did try to get Tony in Kickboxer: Vengeance. Tony Jaa was a big part of how I got back into martial arts filmmaking. I was on vacation with my son and his friend who were around 12 at the time, and they had rented Ong-Bak and were watching it on loop at the house we rented with their eyes glued to the screen, just like I used to watch Enter the Dragon with my buddies every time it showed at the theaters when I was his age. Tony really reignited that love of martial arts in this generation, and it was great to work with him on Jiu Jitsu. He’s an incredible performer, with a great personality, who uplifts everyone around him on set, much like Alain. Beyond that, he went out of his way to give back to the local Thai community in Cyprus, doing a workshop for the local kids and spending time with their community which just goes to show the kind of guy he is. I would love to work with Tony again at any time. In terms of Jaa vs Moussi, you’ll just have to wait and see what we have in store.

MAAC: You have put together quite an all-star cast of martial arts/action stars for this film! Besides Moussi and Jaa, fans are excited to see Marrese Crump, Juju Chan, Frank Grillo, and of course the one and only Nicolas Cage! A lot of fans may not know that Cage actually trains in Jiu Jitsu in real life under former UFC champ Royce Gracie. Will we get to see him display some of his skills on-screen?

Dimitri Logothetis: It was important for me to bring together a cast who are familiar with martial arts at the very least, as it really opens up the possibilities for what we can do in terms of the choreography, but this cast took that to a whole other level. Working with Marrese was a dream. He is such a precise and accurate martial artist and stunt performer, and his moves really light up the screen. He actually trained under the same Muay Thai master as Tony Jaa, and you can see it in the way he moves. Incredibly talented guy, and a pleasure to work with. Juju similarly brought her own style and precision to her role and made it easy to shoot some jaw-dropping sequences with her skill and accuracy, as well as her charisma. She’s really captivating and brings a lot of herself to the role. We also had the legendary BJJ master, Rigan Machado in the cast, and he brought great energy to the set along with his unparalleled Jiu Jitsu expertise. Nic Cage was quick to downplay his Jiu Jitsu training, particularly because he was around a bunch of Jiu Jitsu masters, but once we started working it was clear he was being modest. His skills allowed him to pick up the choreography quickly, make it his own, and make it look great on film, which isn’t easy. You will get to see all of his skills on display in Jiu Jitsu.

While we are on the topic of BJJ, since the release of the trailer it’s been fun watching all the BJJ guys argue about what is or isn’t real Jiu Jitsu. I’ve been avoiding weighing in because honestly, it’s all great publicity for our film, but I’ll just say that we’ve got ‘real’ Jiu Jitsu of all kinds in the film, alongside other disciplines. We have taken some liberties but you will have to wait and see how they are justified in the world of the film. If you look into the history closely, no one knows for sure where Jiu Jitsu came from. Perhaps roughly 2,000 years ago out of Japan, perhaps with some monks in India 4,000 years ago, and in the film we offer a theory of our own.

MAAC: Judging by the stars involved, Jiu Jitsu is guaranteed to be action-packed. With most of your cast members being real-life martial artists, were you tempted to make the action scenes even more complex knowing the actors have the physical skills and are capable of doing it themselves?

Dimitri Logothetis: That’s exactly right. Time management is a big deal in film production, and working with capable martial arts performers in the cast cuts the shoot time nearly in half, which lets us shoot more, and get more great martial arts sequences in the movie. Tempted? Compelled! I owe it to my fans to push our action sequences to the absolute limit, and everyone on the cast and crew can tell you that that’s exactly what we did in Jiu Jitsu.

MAAC: What was the most challenging scene to film?

Dimitri Logothetis: A couple of sequences come to mind, but the oner (one-shot sequence) with Tony Jaa and Alain Moussi running along the top of a wall, was a great example of pushing our team to the limit. We were on location at an abandoned village in the hot summer sun, where our art department had built us out a wonderful playground for our stunt team to design an extended oner with high flying acrobatics, pyro, custom camera rigs, and death-defying stunts. Just like in Retaliation, our stunt designer actually operated the camera for part of the sequence, because he was the only one who could pull off the acrobatics required while following the action. That was a crazy day. Another challenging sequence was shooting at night in the jungle, but that was mostly because of the mosquitos.

MAAC: Did anybody sustain any injuries during the action scenes?

Dimitri Logothetis: Not that I heard of! Must not have been too bad.

MAAC: A lot of films have been delayed due the current pandemic. Is Jiu Jitsu’s theatrical and digital release date on November 20th locked in?

Dimitri Logothetis: It is locked in. I noticed we originally shared our release date with James Bond but it looks like we scared them off. Covid hit just as we were finishing post-production, so it didn’t impact our timeline much. I hope we can bring a little bit of joy to everyone stuck at home at this time.

MAAC: What other projects do you have in the pipeline after Jiu Jitsu? Is the third installment of the Kickboxer franchise, Kickboxer: Armageddon, still in the works with Moussi and Jean Claude Van Damme returning?

Dimitri Logothetis: Next up is Man of War, a straight-ahead action film about a war veteran who has to rescue his family from some drug running kidnappers. It’s a great script from The Fast and the Furious writer Gary Scott Thompson, and I’m really excited about what we have planned for it. There will be martial arts, but it’s an opportunity for me to work in some other types of action sequences, like gunfights, car chases, big explosions, which I have a lot of experience with, and some new ideas for. Other than that I have several films I’m preparing, and you never know what will get the momentum needed to go into production next, but Kickboxer Armageddon is still in the works and I’ve got a few remakes from our library in preproduction as well like the sports comedy The Best of Times, body swap romantic comedy All of Me which originally starred Steve Martin, and action-romance oddity Brainsmasher. If you like the sound of Jiu Jitsu, check out the original Brainsmasher. It’s a very fun movie with Andrew Dice Clay and Teri Hatcher that was way ahead of its time in terms of aesthetics, and it’s embrace of an out-there genre plot that takes the form in an unexpected direction.

MAAC: Thanks again Dimitri for your time. We are very much looking forward to Jiu Jitsu! Please take care and stay safe!

Dimitri Logothetis: Thank you for the support! Enjoy Jiu Jitsu and stay safe.

Catch Jiu Jitsu in theaters, On Demand and Digital on November 20, 2020. Click HERE to view the action-packed Trailer!