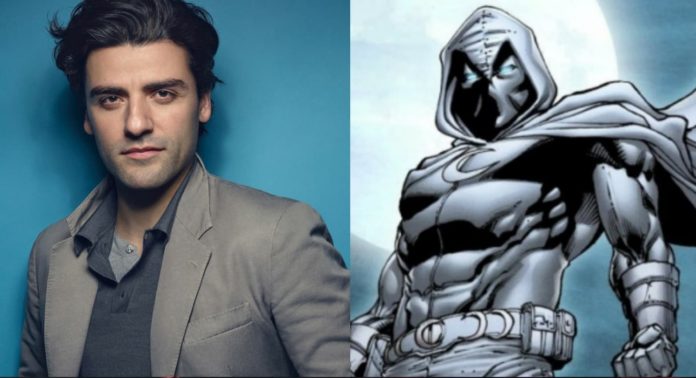 UPDATE: Take a look at the Super Bowl spot for Moon Knight below!

UPDATE: The first official Trailer for Moon Knight is here!

Synopsis: The series follows Steven Grant, a mild-mannered gift-shop employee, who becomes plagued with blackouts and memories of another life. Steven discovers he has dissociative identity disorder and shares a body with mercenary Marc Spector. As Steven/Marc’s enemies converge upon them, they must navigate their complex identities while thrust into a deadly mystery among the powerful gods of Egypt.

Moon Knight is set to premiere on Disney+ March 30th.

UPDATE: Star Oscar Isaac is working hard to prepare physically for his role as Moon Knight as seen in the training video below!

Although not confirmed, Hawke may be portraying “Bushman, a fellow mercenary who turned on the hero when Egyptian gold came into the picture.”

UPDATE: Director Mohamed Diab is set to direct Marvel Studios’ Moon Knight series. The Egyptian filmmaker is best known for directing Eshtebak aka Clash, which was an official selection at the 2016 Cannes Film Festival in the Un Certain Regard category.

After playing super villain Apocalypse in 2016’s X-Men: Apocalypse, actor Oscar Isaac (Star Wars: The Rise of Skywalker) may be getting another crack at the superhero genre in the Marvel Cinematic Universe. Isaac is currently in talks for Marvel Studios’ Moon Knight.

The Disney+ series follows “the story of Marc Spector, an elite soldier and mercenary who decides to fight crime after he becomes the human avatar of Khonshu, the Egyptian god of the moon.”