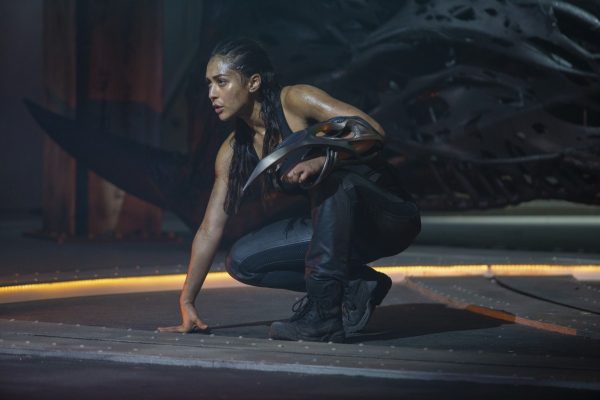 I must say that when I originally viewed the sci-fi movie Skyline (2010), I never imagined that it would have been the start of a franchise. Directors Colin and Greg Strause did a decent job of stretching what was a relatively low budget and making something that could compete with blockbuster fare. Sure it could be classified as forgettable, but for the most part it was an enjoyable alien invasion flick.

Still, even with an open ending, I thought it would be one and done for the Skyline series. Of course I was proven wrong. Imagine my surprise when a sequel, Beyond Skyline (2017) was announced, this time to be helmed by the first entry’s writer Liam O’Donnell.

Not only that, but it had somehow managed to attract the talents of Frank Grillo and The Raid’s (2010) Iko Uwais and Yaya Ruhian in leading roles. The sequel was a much different film from the original. Whereas the first movie mostly stayed confined to the rooms of a luxury high rise, Beyond Skyline opened the action up, taking our main characters into the confines of the alien’s ship then on to Indonesia.

With the inclusion of Uwais and Ruhian, the action had a strong martial arts focus, something that wasn’t even a thought in the original film. Like the first film the sequel still had issues, with the low budget becoming apparent on a number of occasions. Still, considering this was O’Donnell’s first time in the director’s chair he managed to turn out an enjoyably action packed B Movie.

Clearly Beyond Skyline was enough of a success, as O’Donnell has returned with the proposed final part of the trilogy, Skylin3s. Like the previous film O’Donnell’s imagination sometimes exceeds the limitations of the budget, with some noticeably ropey effects. However, for the most part the CGI is of a decent quality with O’Donnell throwing in some memorable action scenes for good measure.

It does pale in comparison to the previous film mainly due to the absence of Grillo and Uwais. However, leading lady Lindsey Morgan makes for a fine replacement and handling herself well in the action scenes. Her character Rose is an alien/human hybrid who was introduced in the last movie, initially as a baby before her rapid growth found her turning into Morgan in the closing moments of the film.

The sequel pretty much picks up from there, with Rose having to make an impossible decision in order to save humanity. We then fast forward years later where it would seem that Rose’s efforts were mostly in vain, with the world almost being on the brink of collapse and Rose now a wanted fugitive.

A deadly virus is now spreading, reverting the now peaceful alien/human hybrids back to their previous violent human hunting selves. In order to save humanity, General Radford (Alexander Siddig) orders the arrest of Rose, hoping that he can coerce her to take part in a mission to save humanity. Teaming with a band of mercenaries, she is to travel to alien planet Cobalt 1 and retrieve a drive that could stop the spread of the virus.

Meanwhile Dr. Mal (Rhona Mitra) and a group of refugees fight off the infected, hoping they can buy some time for Rose to complete her mission.

O’Donnell has written all three of the Skyline films. They aren’t exactly known for the well written characters or plots, with all three films pretty much wearing their influences on their sleeves. While the first film was a low budget Independence Day (1996) and the sequel was a sci-fi take on The Raid, the third entry is the Aliens (1986) of the series, with a good deal of the action focusing on a special team of mercenaries not unlike Aliens colonial marines.

Unlike Aliens, the characters aren’t as well rounded, with the actors having to bring more to their role than is on the written page. For the most part the cast rise to the challenge.

Additionally some of the dialogue didn’t ring true. I know this may sound strange considering it is a sci-fi action movie afterall, but on a number of occasions O’Donnell has members of his cast deliver lines and phrases that seem unnatural. This may be due to an American writing dialogue for mostly British characters. Still, it isn’t too glaring and perhaps I am just being overly pernickety.

Sci-fi/fantasy fans may know Lindsey Morgan from her featured role on the hit show The 100 (2014). While she was a supporting player on that show, she is front and centre here, showing she is more than capable of being the lead. The character of Rose is somewhat conflicted, as killing the aliens would partly mean killing her own kind due to her being a hybrid. Additionally, while she has her own special abilities, they come at a price, aging her every time she uses them. This makes Rose more than just the simple Ripley clone she could have been.

Unfortunately for Morgan, her next role finds her once again as a supporting player, co-starring with Jared Padalecki’s in the upcoming Walker Texas Ranger remake Walker (2020).

Morgan’s main co-star is Jonathan Howard as Leon, a member of Rose’s team. He acquits himself well in the action department, getting a few standout scenes to himself. There is some dramatic heft added to his relationship with Rose, as part of his backstory cause a degree of tension between the two.

Like its predecessor, Skylin3s has a strong martial arts element, this time in the presence of DTV action star Daniel Bernhardt. Starring in numerous low budget actioners, Bernhardt has been appearing in a good number of mainstream features of late, with the likes of John Wick (2014), Atomic Blonde (2014) and television series Barry (2019) all giving him a chance to show off his talents.

While Bernhardt isn’t the star of the film, he certainly gets to make an impression. It doesn’t come as a surprise that his character is a badass, with the most memorable action scene being a fight scene involving him and co-star Cha-Lee Yoon. It is just a shame that it isn’t longer. This could be levied at the majority of the action, as while it is competently carried out, it feels that it should be bigger considering what’s at stake.

Any martial arts fans aware of the work of Cha-Lee Yoon will not be surprised to see that his supposed lab geek turns out to be quite the fighter. A member of the Reel Deal Action team, Yoon has been working consistently as an actor and stunt performer for the last decade, working on the likes of Hitman: Agent 47 (2015) and more recently Michael Bay’s 6 Underground (2019).

His fellow Reel Deal Action team members Phong Giang and Can Aydin also worked on Skyline. Giang appears under a load of prosthetics as the Matriarch, the main villain of the film while Aydin worked behind the scenes as the stunt coordinator. I would urge any fight fans to seek Reel Deal Action’s earlier films Plan B (2016) and Against the Ropes (2018) which are filled with excellently choreographed action scenes.

While the majority of the action takes place off-world, there is an ongoing earthbound sub plot. For the most part these scenes just slow the main plot down, with Rhona Mitra being surprisingly unconvincing in her action scenes considering some of her previous work in the likes of Strike Back (2010) and Hard Target 2 (2016).

Ultimately these scenes turn out to be worthwhile due to the inclusion of the mighty James Cosmo and a guest appearance from Yayan Ruhian reprising his role from the previous film.

Ultimately Skylin3s is never going to be deemed a classic. It is clearly a B movie like the previous two films. What rises Skylin3s above similar fare is that it clearly knows that its a B movie and doesn’t try to rise above it. It gives the audience exactly what they expect from this series and while it is slightly overlong it mostly keeps things moving at a fast pace.

Lastly, while it has been proposed that this was the final part of the trilogy, it is clear during the film that there are plans for the series to continue if this third entry is successful.