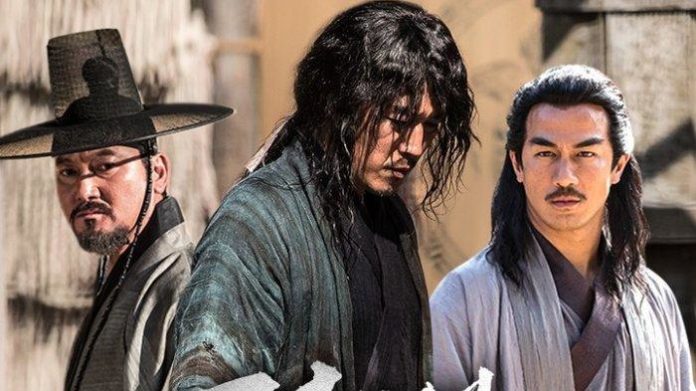 You can always rely on the good people at Well Go USA to bring western audiences the best in Asian action movies. They have been behind the stateside releases of countless hits, most recently distributing classics like Ip Man 4: The Finale (2019), Triple Threat (2019) and Shadow (2019). The Swordsman is another fine actioner that whilst not perfect can still sit proudly amongst those mentioned.

I had been looking forward to The Swordsman ever since seeing its very first trailer. Not only did it boast an action heavy role from Korean leading man Jang Hyuk it also featured a supporting role from Indonesian martial arts star Joe Taslim, here making his Korean movie debut.

Hyuk stars as Joseon’s most skilled swordsman Tae-yul, who has since retired after being almost blinded during a coup to dethrone the King. With his eyes gradually failing, he has chosen to live a quiet life in the mountains with his daughter Tae-ok (Kim Hyun-soo), with them being far removed from the violence of his past.

As expected, his life of peace was never meant to last with him having to unsheathe his sword after his daughter goes missing during a visit to town. This brings him once again into conflict with famed swordsman Min Seung-ho (Jung Man-sik), the very same swordsman who almost took his sight years before.

As well as Seung-ho, Tae-yul has to contend with the evil Gurutai (Joe Taslim) who may just be more skilled than Tae-yul and Seung-ho combined. With Tae-yul’s eyesight quickly getting worse, he must race against time in order to rescue Tae-ok.

Taking into account this is his first feature, Choi Jae-Hoon does a terrific job of directing. Considering his background as a novelist, he keeps things pretty straightforward, with his characters pared back to the minimum. The main thrust of the plot is fairly simple and reminiscent of countless action films, but Jae-Hoon does inject some political and historical aspects into the plot to keep things interesting. However, knowledge of the time period or its politics aren’t a requirement to understand the film.

In essence, The Swordsman plays like a period take on Taken (2008) with some Zatoichi and political intrigue thrown in for good measure.

One complaint that could be levied at a number of Korean actioners is their overblown length, with many being well over the 2 hour mark. This isn’t the case with The Swordsman, with Jae-Hoon keeping proceedings at a lean 101 minutes.

Even with this shorter run time, Jae-Hoon doesn’t jump straight into the action, instead gradually building to it. After a brief sword fight during the opening moments it is almost the 50 minute mark before we are treated to another action scene. Jae-Hoon still keeps things interesting in the interim, setting up the separate plot threads and characters before gradually bringing them together as the film progresses.

I initially expected more action but when it finally appears it doesn’t let up. The most memorable sequence features Hyuk taking on what seems like an endless army of gun toting Manchu warriors. It has him slicing up every oncomer, even performing some bullet dodges like Neo from The Matrix (1999).

From this you will probably have realized that the action in The Swordsman isn’t exactly realistic, but this in no way impinges the excitement it generates.

The only minor drawback during the fight scenes was the inclusion of some CGI blood effects which is always a drawback for me. Like so many recent action movies, I am baffled that after all these years of utilizing CGI in action movies that production companies have still been unable to seemingly create realistic looking blood effects.

To be fair, the sub-par blood effects don’t detract from the overall quality of the action and there are certainly larger budgeted action movies that have poorer effects than evident here.

Performance wise, the three lead actors all do solid work. It was great seeing Jang Hyuk once again in a leading role. I hadn’t seen much of him since Ordinary Person (2017) as he has been doing a great deal of television work. Most of these shows are unavailable in my region.

He capably portrays his oncoming blindness, although suspension of disbelief is required when it comes to his fight scenes, which Hyuk throws himself right into. His oncoming sight loss never gets in the way of him unleashing a barrage of deadly sword moves.

The dependable Jung Man-sik always brings a level of quality to productions and doesn’t disappoint here. He doesn’t get involved in a great deal of the action but his character is one of the more interesting of the film, with his allegiances wavering throughout.

Any martial arts fans should be aware of the terrific Joe Taslim by now. With his roles in The Raid (2011), The Night Comes for Us (2018) and Cinemax’s Warrior (2019), he has fast become a fan favourite.

His role here doesn’t live up to his previous work. Taslim is a hate worthy villain but he surprisingly doesn’t take part in much of the action, with his one on one with Hyuk in the finale being his only fight scene.  Of course this is a highlight of the movie, with their fight being excellently done.

Although we are told that Taslim’s Gurutai is a deadly fighter, we as the audience don’t really get an impression of this from his actions. It is more down to an awareness of Joe Taslim as a performer that you know Hyuk will have his work cut out for him when they face off.

The Swordsman does have some slight issues that perhaps stop it from becoming an out and out classic, but there is enough here to satisfy martial arts and action fans with its mixture of expertly choreographed fight scenes and solid performances.

Additionally, it works as a great calling card for newcomer Choi Je-hoon and I look forward to seeing what he chooses to follow it up with next.