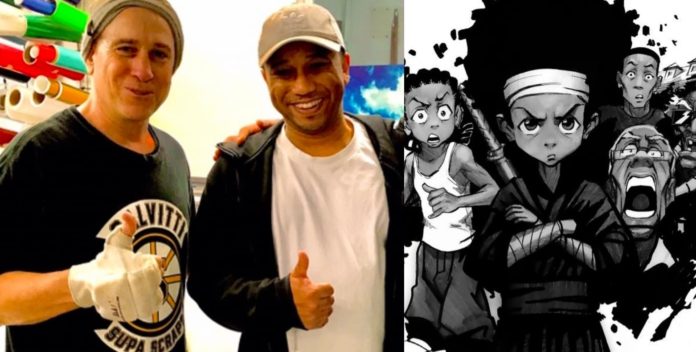 UPDATE: According to creator Aaron McGruder’s official Instagram Bio, The Boondocks reboot will not be hitting HBO Max until sometime in 2022.

A reboot of the hit animated series The Boondocks is coming to HBO Max with original creator Aaron McGruder on-board. MAAC has learned exclusively that McGruder has enlisted none other than John Salvitti (Pound of Flesh) to handle the fight choreography for the series. The pair most recently collaborated on The Adventures of Hooligan Squad in World War III (2017).

With The Boondocks, Salvitti continues making strides in Hollywood as an Action Director and fight choreographer by bringing his years of experience as a veteran of Hong Kong action cinema honed from his many collaborations with long time friend, martial arts legend Donnie Yen (Special I.D., Kung Fu Jungle, Flash Point).

“This is a high mark of my career to be able to work with director, creator, and showrunner McGruder. Tapping into his vision was to give the animators something to sink their teeth into. His vision is to hire a fight choreographer that can be tested. With Hooligan Squad, we really bonded and felt true to the team spirit,” said Salvitti.

“What I’ve learned is earning action through different characters with their own unique ways. Learning from a brilliant writer in McGruder. With this project I’m able to bring together elements of wushu, kung fu, boxing, and MMA. Blending, mixing and bringing something fresh and new. I am able to bridge modern kung fu with Huey and the street style with Riley,” he added.

The original series, which is based off of a comic strip by McGruder, is about the Freemans, a black family settling into the fictional white suburb of Woodcrest and follows them as they fight the regime of Uncle Ruckus, who rules over the community government.

Oscar and Emmy awards winner Regina King (HBO’s Watchmen) is expected to return as the voices of Huey and Riley. Pictured below is John Salvitti with Aaron McGruder and DJ Pooh (Friday franchise), who provided his voice talents in the original The Boondocks series.

Look out for The Boondocks reboot to premiere later this year only on HBO Max.