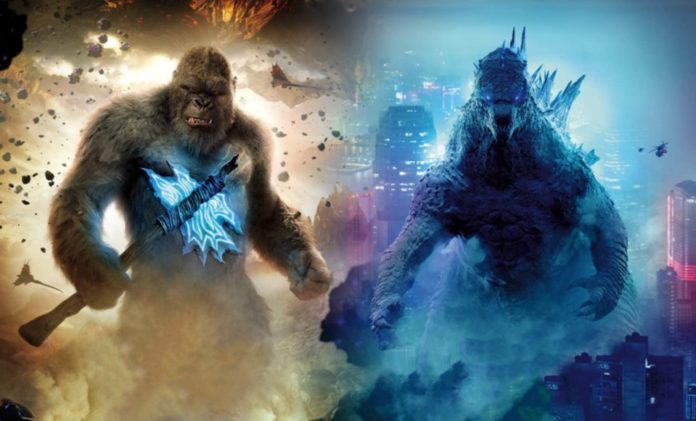 After a number of delays, Adam Wingard’s Godzilla vs Kong is finally upon us, being released simultaneously in theaters and on HBO Max. To say I was excited was an understatement. Having been a lifelong Godzilla fan and especially liking the last entry, Godzilla: King of the Monsters (2018), I couldn’t wait to see where the series would take us next. Bringing the mighty Kong into the mix was just an added bonus.

The film picks up five years after the events of King of the Monsters, where Godzilla defeated King Ghidorah. Since then he has been monitored at a distance by Monarch, headed up by Dr. Mark Russell (Kyle Chandler, returning from the previous film).

Miles away we find Kong being held captive in a large dome that has been created by Monarch to emulate his home of Skull Island. He is visited and monitored by scientist Ilene Andrews (Rebecca Hall) and her adopted daughter Jia (Kaylee Hottle). His captivity it turns out is so that Godzilla is unable to track him down.

However, it seems that their meeting will be inevitable, with Godzilla uncharacteristically attacking an Apex Cybernetics facility. Because of this, CEO Walter Simmons (Demian Bichir) seeks out the assistance of Nathan Lind (Alexander Skarsgard), a Hollow Earth theorist.

Nathan proposes to plot a course to the Hollow Earth, the homeworld of the Titans, where the hope is they will find a power source powerful enough to defeat Godzilla. Firstly he has to convince Ilene to let Kong guide them to the hollow earth.

Meanwhile the returning Madison Russell (Millie Bobby Brown) begins to investigate the real reason Godzilla attacked the Apex facility, with it looking likely Apex aren’t the saviours they initially appear to be.

With both Nathan and Madison’s missions underway, it’s only a matter of time before Kong and Godzilla come face to face, with the ensuing destruction being catastrophic. Both Titans aim to be the Alpha, but there can only be one winner, which should put fans on the edge of their seats anticipating who it will be.

Now some reviewers online have complained about the paper thin characters on display. While this is true, I wonder if something like Godzilla vs Kong is really the film for them. What fans of Kaiju films really show up for human interaction? We’re here to see full on monster brawls, and this is one area Godzilla vs Kong doesn’t disappoint.

There are two massive battles between the two titans during the film’s runtime, and it’s these sequences that are the selling points of the movie. Both are beautifully choreographed bouts of destruction, with both Godzilla and Kong being bloody and battered at the end of them.

The first takes place in and around an aircraft carrier, with Kong trying to fight off the attacking Godzilla from destroying the remainder of the fleet. For the most part it seems as if Kong is the underdog, but he continues to fight.

Of the two titans, Kong has the most screen time, with him being the more clear cut hero of the piece, with Godzilla’s reasoning for suddenly attacking humanity being more of a mystery, making him seemingly more villainous this time round.

While there are some smaller skirmishes throughout the film, the largest set piece is the lengthy finale which finds Kong and Godzilla facing off in Hong Kong, with them pretty much destroying everything in their wake. It stands out as one of the finest Kaiju battles of the series (well the American made ones at least).

In terms of the human characters, I said earlier about them being paper thin, but they still serve a purpose, some more than others. Alexander Skarsgard’s scientist makes for a decent hero, with his team up with fellow scientist Rebecca Hall being the most interesting storyline of the human characters. Skarsgard even plays an important part during the finale in assisting our Titan heroes.

Millie Bobby Brown returns as Madison Russell from King of the Monsters, with her being accompanied by Bryan Tyree Henry’s conspiracy theorist Bernie and her friend Josh played by Julian Dennison. The three have teamed up to uncover the mystery of why Godzilla has turned on mankind.

To be honest, other than connecting Godzilla vs Kong to the previous King of the Monsters, Bobbie Brown’s character and her companions are mostly unneeded, being used more as expository characters. While her and her co-star do well in their roles, the film probably wouldn’t have lost much momentum if they were removed from the plot altogether.

The likes of Demian Bachir, Eiza Gonzalez and Shun Oguri are all mostly wasted in one note roles but do enough to keep the plot moving. I was especially disappointed in how underused Kyle Chandler was as I thought he was one of the better human characters from King of the Monsters. Here he is lucky if he even has five minutes of screen time.

If this was any other film these types of quibbles would perhaps bother me, but the lack of screen time for some of the cast just means more is given to the real stars of the film, namely Kong and Godzilla.

This marks the largest canvas director Adam Wingard has ever had to work on, with previous efforts like You’re Next (2011) and The Guest (2014) being smaller scale efforts. All his films, even including the poorly received Death Note (2017) remake have an identifiable style about them, something that is somewhat absent here.

This isn’t to devalue the level of craftsmanship on show, but his work here isn’t very much different in style to King of the Monsters helmer Michael Dougherty (who retains a story by credit). However there are still the odd touches that are clearly his, especially in the colour palette on display, with there being a lot of vibrant neon colours used during the lengthy Hong Kong set finale.

Another similarity is his implementation of a synth heavy score, courtesy of the mighty Tom Holkenborg a.k.a Junkie XL, who seems to be the go to guy these days for composing memorable blockbuster soundtracks.

To Wingard’s credit, he seems to have fully embraced the sheer ridiculousness of the scenario, with Godzilla vs Kong embracing the more sci-fi elements of the series.

To be truthful, it also embraces the silliest aspects of the series, which may be a detractor to some but just gave me a massive grin across my face.

My favourite period of the Japanese Godzilla series was the Heisei era which started with Return of Godzilla (1984) and concluded with Godzilla vs Destroyah (1995), Each entry of this period became more bonkers than the last, featuring the likes of space aliens and humans with psychic abilities.

While Godzilla vs Kong doesn’t go as far out as the Heisei period, one of it’s best realized scenes features Kong and our team of scientists traveling to the centre of the earth, where they are transported to another world featuring the likes of mountains floating in the sky and various different types of monsters.

Godzilla and Kong aren’t the only popular Kaiju characters to show up. As already shown in the teasers, the deadly Mecha Godzilla finally makes his American debut, showing he’s a true force to be reckoned with, putting both of our titans through their paces.

Ultimately Godzilla vs Kong does exactly as it says on the tin, being filled to the brim with exciting monster action. It isn’t the best the series has had to offer but it certainly kept this Kaiju fan entertained.

It will be interesting to see where the series goes from here as nothing has yet to be announced. Wingard however is going on to helm the recently announced feature version of 80’s cartoon ThunderCats. Hopefully he gets to include more of his 80’s style sensibilities than he did here.

More interestingly (at least for me), he is adapting a sequel to John Woo’s masterpiece Face/Off (1997), with both Nicolas Cage and John Travolta rumoured to return. I for one cant wait to see the results of this.