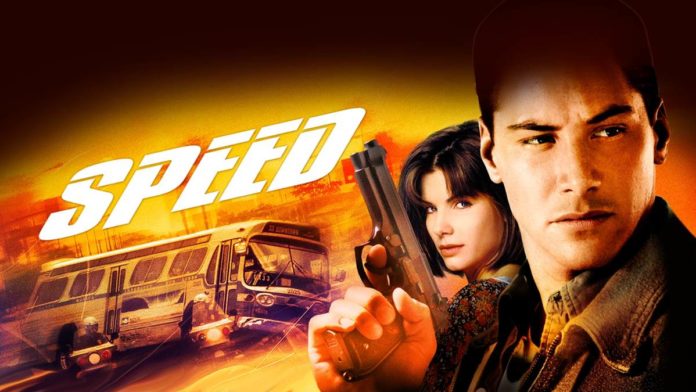 I don’t think many would disagree with me in saying that Speed (1994) is a bonafide action classic. Not only did it cement leading man Keanu Reeves action star credentials but paved the way for Sandra Bullock’s path to superstardom. Accompany this with a charismatic villain turn from Dennis Hopper along with tight direction from first timer Jan de Bont and you have a perfect time at the movies.

With the recent release of Speed on 4K UHD, it seems like now is the perfect time to revisit one of the best action films of the 90’s. I’ll only briefly go over the plot, as most action fans will probably know it by heart.

After LAPD Cop Jack Traven (Keanu Reeves) thwarts Howard Payne’s (Dennis Hopper) plans of holding a crowded elevator hostage, he is forced to play a game with him where Payne has placed a bomb on a bus that will explode if it goes under 50 miles per hour. Now it’s up to Traven, with assistance from plucky bus passenger Annie (Sandra Bullock) to keep the bus moving while at the same time figuring out how to stop Payne.

Considering it was made almost 27 years ago, Speed has hardly aged a day. This could be down to the fact that both Keanu Reeves and Sandra Bullock look almost the same since it’s release, but it is also down to the almost relentless action on screen which still stands up in comparison with any modern day blockbuster. The only thing that slightly dates is the absence of modern technology i.e. mobile phones.

Jan de Bont does a terrific job with his directorial debut, keeping the action going at a relentless pace. Once Reeves is onboard the bus the film barely stops for a breath. While this was De Bont’s first film in the director’s chair, he had previous action movie experience by working as a director of photography on the likes of Die Hard (1988), Black Rain (1989) and The Hunt for Red October (1990).

Interestingly, The Hunt for Red October director John McTiernan was once touted as the director of Speed before pulling out due to what he perceived as its similarities to Die Hard. This cleared the path for de Bont.

Jan de Bont and his director of photography Andrzej Bartkowiak bring a lot of energy to proceedings by employing the use of handheld cameras to capture the action. With the upgrade to 4K, this is probably the best the action has ever looked.

Visually the film is quite an upgrade from the Blu Ray release that came out some time back. That release had some problems at the time but thankfully these aren’t evident from this recent 4K presentation of the film.

I was worried that the sharpness of the image may pose a problem for a film of this age, perhaps showing the age of the special effects or making stunt doubles more noticeable, but these were kept to a minimum. Only on a couple of occasions did I notice the lead actor doubles, but this was briefly. Luckily for the most part it is clear that Reeves and Bullock did as much of the stunts as possible.

In regards to the effects they still hold up remarkably well. Other than an obvious model shot (at least to this viewer) they stand up well to close scrutiny and in no way date the film.

I was slightly disappointed by the lack of Dolby Atmos track on the disk, with the 5.1 DTS-HD from the Blu Ray release being used once again. Still it is a quality mix and will still give most sound systems a good workout. The action scenes are suitably impressive with Mark Mancina’s rousing score shining throughout.

I was actually surprised when this release was announced as Disney had stated that they would not be releasing any of their or the recently acquisitioned 20th Century Fox’s previous catalogue on 4K UHD. They stated they would primarily be focusing their attention on 4K releases of their new titles. I’m not sure of the circumstances of Disney’s decision to release Speed but I must say that I am glad they made it.

Of interest to Martial Arts Action Cinema Fans, the leading role reputedly had martial arts star Jeff Speakman at one point lined up to star. Speakman has spoken about this at some length in the past and it is interesting to think how different the film would have been to what was finally produced.

After Speakman the role was offered to Stephen Baldwin who ultimately turned down the role. Baldwin’s loss was Keanu Reeves’ gain. It’s hard to believe when Speed was in production that the execs at 20th Century Fox were unsure of Reeve casting, not thinking he was a strong enough lead to carry the film. I suppose this was well before The Matrix (1999) or John Wick (2014) made him one of Hollywood’s best loved action stars, with only Point Break (1991) giving an inclination of what was to come.

Jack Traven is a perfect role for Reeves, with it playing to his strengths. It helps that he has the wonderful Sandra Bullock to work alongside, with them sharing terrific chemistry throughout. The two would reunite on screen years later in romantic drama The Lake House (2006) which proved their on screen chemistry was no fluke.

As great as Reeves and Bullock are, they are almost upstaged by the legendary Dennis Hopper who gets the majority of the film’s best lines. He is so good here it is a shame to think that he would find himself starring in increasingly poor DTV movies as he moved into the 2000’s.

The remainder of the cast are rounded out with such talents as Jeff Daniels, Joe Morton and Alan Ruck to name a few. All of them get a chance to make an impression, even with their limited screen time.

Graham Yost’s script was certainly high concept at the time. Although he manages to make things seem fresh he still contains a lot of the genre tropes expected in the action genre, as well as also containing elements from the great disaster movies of the 70’s. The varied character types that make up the passengers of the bus are exactly the kind you would expect to populate the works of Irwin Allen.

It is widely known these days that a great deal of Yost’s script was reworked by Joss Whedon who worked as an uncredited scriptwriter. Clearly Whedon has a real ear for dialogue, with Yost admitting that the majority of the dialogue included in the film belongs to Whedon.

Yost would go on from Speed to write a number of action movies, with Broken Arrow (1996) and Hard Rain (1998) being some of his most recognizable work. More recently he has worked mostly in television, writing and producing some classic shows such as Justified (2010) and The Americans (2013).

In regards to Joss Whedon, well we all know what he has been up to since his Speed days so I don’t need to get into that here.

If it is for people new to the film or those wishing to revisit, I would definitely recommend the Speed 4K UHD, as this is probably the best the film will ever look. Additionally it also comes with some interesting special features. Admittedly these were available on previous releases of the film but this doesn’t make them any less worthwhile. The best of these features is the commentary track from writer Graham Yost and producer Mark Gordon, with the two of them having terrific fun discussing the film.