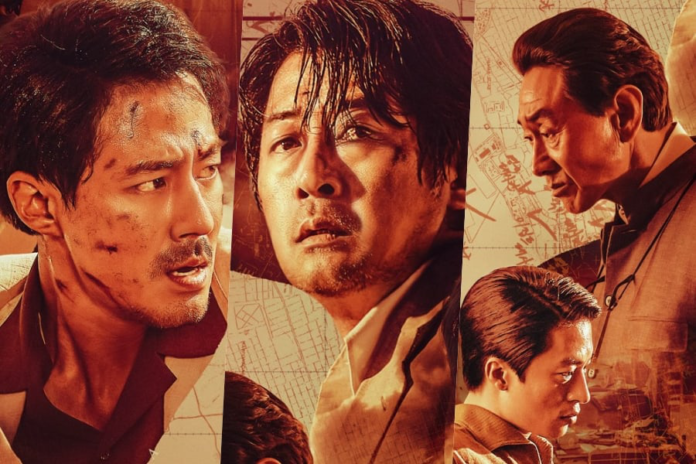 To the casual film goers the name Ryoo Seung-wan may not exactly be familiar. Even having directed such action classics as No Blood No Tears (2002), City of Violence (2006) and The Berlin File (2013), he has somehow been overshadowed by more famous directors like Kim Jee-woon and Joon Bong-ho.

It is looking as if this is about to change for the talented director, as his latest release, the historical thriller Escape from Mogadishu has just become South Korea’s submission for the 2022 Oscars.

Based on a piece of history I was somewhat unaware of, Escape from Mogadishu takes place in 1991, during an important time for South Korea. In 1991 South Korea had yet to become a member of the UN and were determined to become so. As votes from UN members were crucial in attaining membership status, Somalia’s vote was highly important to them.

The job of securing this vote is appointed to South Korean Ambassador to Somalia Han Sin-seong (Kim Yoon-seok), who is assisted by intelligence agent Kang Dae-jin (Jo In-sung). Their job is made more challenging due to some behind the scenes meddling from North Korean politicians led by Ambassador Rim Yong-su (Heo Joon-ho), who are also trying to secure their own votes. North Korea has an advantage having begun its outreach work with Africa and Europe 20 years before the South.

All their political games are quickly forgotten about when the city of Somalia where they are based falls into civil war. With their means of communication failing and no assistance being forthcoming both Embassy’s realize that they’re only chance of survival may be them working together.

Ryoo Seung-wan has spoken of his influences in the past, with his films taking much inspiration from Hong Kong action movies, especially those from Shaw Brothers, Jackie Chan films and the work of John Woo. A great deal of these influences can be seen in his earlier films such as Arahan (2004) and especially City of Violence (2006).

Interestingly, considering how much he has been influenced by Hong Kong cinema, it has in return been influenced by him with even something like crime thriller The Vanished Murderer (2015) copying one of his action scenes wholesale.

As great as it is to see him incorporating such influences into his movies, he still knows when to dial them back, only using them when it fits the material. He had done so previously in boxing drama Crying Fist (2005) as well as epic war drama The Battleship Island (2017). He does it again with Escape from Mogadishu, which although has its fair share of blistering action scenes, he makes sure to keep them (mostly) in the realm of possibility.

There are no extended martial arts battles or balletic gunfights, with Seung-wan giving his action a sense of realism that some of his other movies don’t have. Of course, it is a heightened realism as the action does slightly encroach on improbability although Seung-wan makes sure it is perfectly paced and viscerally intense.

Seung-wan does include a small hand to hand fight which harkens back to some of his earlier work but even this is mostly grounded in reality. The best of the action comes towards the final third of the film with a nail biting car chase that is filled with expert vehicular stunts and bravura camera work.

However, unlike some of his earlier features, this film isn’t a full on action movie, with Seung-wan taking his time to build to the action in the second half of the film. At first he gives us a chance to get to know our characters, even injecting some levity in the early stages.

The inclusion of humour may be slightly jarring considering the real life situation that is the basis of the film but as the film progresses you realize it was needed as the latter half of the movie becomes suitably harrowing in its depiction of the atrocities of the time. Seung-wan is careful not to go overboard though. At the end of the day he is making an action thriller not an exploitation movie.

The script by Seung-wan and Lee Ki-cheol smartly doesn’t choose sides between the North and South Korean characters, with both sides being shown as having flaws, with a couple of characters really showing their selfishness in order to survive. Still, even they end up showing some courage when the need arises.

Both parties are initially distrusting of the other, with Jo In-sung’s disgraced agent Kang Dae-jin even going so far to try and get the Northern politicians to defect, but when needs be they come to the realization that the only way to survive is to come to an understanding and work together.

Other than Kang Dae-jin, the majority of the characters are made up of politicians and their families. This is clearly a situation that none of them were prepared for but the likes of Kim Yoon-seok’s  Ambassador Han Sin-seong rises to the challenge, with his humanity coming through in his willingness to help the North Koreans.

Kim Yoon-seok is terrific in the lead role. He has an ability to capture the audience even when playing someone who isn’t exactly the hero, be it the pimp from The Chaser (2005) or his father figure from Hwayi: A Monster Boy (2013).

Here at least he’s in more of a good guy role, more akin to his work in The Classified File (2015) and Dark Figure of Crime (2018), where he plays someone who goes beyond their duty to what they feel is right.

More ambiguous is Jo In-sung who we are told early on that he is a security agent that has been sent to Mogadishu as a punishment. He would clearly rather be elsewhere and isn’t exactly one for trusting others, be they South or North Korean. It makes no difference to him.

He doesn’t exactly come across as trustworthy at first but as the film progresses he comes around, but not before having a short but brutal fight with his North Korean counterpart played by Koo Kyo-hwan. It was good to see In-sung back in action, even for a brief moment, after his action packed role in The Great Battle (2018).

Heo Joon-ho also impresses as North Korean ambassador Rim Yong-su, who is clearly a more capable ambassador to Somalia than South Korea’s. He has an air of dignity about him, with the last thing on his mind being asking the South Korean’s for help. However, he has enough humanity to put aside his politics to try and save his people.

It is mainly a dramatic turn for Joon-ho, with him not really taking part in the on screen action. Due to the type of film this is, it wouldn’t have made sense for him to get involved. If anyone wants a taste of his action credentials should check out his work in Kang Woo-suk’s Silmido (2003) or even his villainous turn in Daniel Lee’s Dragon Squad (2005), a rare performance in a Hong Kong movie where he got to square off against Martial Arts legend Sammo Hung.

The one drawback Escape from Mogadishu has in terms of its characters is how short changed its female characters are. Kim So-jin does well as Ambassador Han’s wife but doesn’t get enough to do in comparison to her male co-stars. Really, it isn’t just the female’s that are shortchanged. It would have been nice to have more of the great Jung Man-sik who stars here as Ambassador Han’s secretary. Man-sik is a Ryoo Seung Wan regular, having shown up previously in The Unjust (2010), Veteran (2015) and The Battleship Island (2017).

Still, the lack of screen time for some secondary characters isn’t enough to derail what is an otherwise captivating movie. You couldn’t exactly say Escape from Mogadishu is fun filled but it is definitely gripping stuff and another great acquisition from Well Go USA. Now I can’t say how it will do come Oscar night, but it will definitely find an audience amongst lovers of action cinema.

Hopefully it will also raise more interest in director Ryoo Seung Wan. I would advise anyone who wasn’t initially aware of this wonderful director to seek out his back catalogue. It shows the quality of his work that something like Escape from Mogadishu isn’t even his best work.