UPDATE: According to VARIETY the film will get a North American release on July 24th. 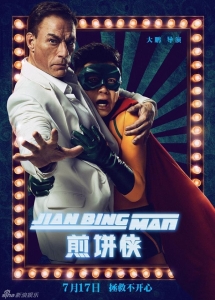 JEAN-CLAUDE VAN DAMME is taking his new-found comedic popularity (see ‘Welcome To The Jungle’) to Hong Kong cinema with the action comedy JIAN BING MAN aka THE PANCAKE MAN!

Check out the hilarious trailer and behind-the-scene video below:

The film is set to open in China on July 17th!