UPDATE: The film have been renamed to JACKIE CHAN PRESENTS: AMNESIA for its U.S. release on January 3rd, 2017. Check out the DVD artwork and U.S. Trailer below. 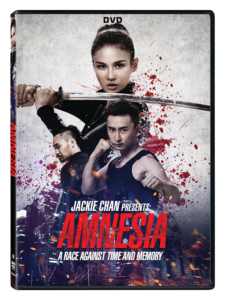 SYNOPSIS: Martial-arts legend Jackie Chan presents this pulse-pounding update to his own classic thriller. Finding himself at a murder scene, bike courier Li Ziwei tries to escape, but the culprits force him off a bridge. The amnesia from his head injuries means he can’t recognize the faces of his enemies, who have framed him for the crime. Now, carrying the parcel that’s his only clue, and with the help of sassy hitchhiker Tong Xin, Li Ziwei must outrun killers and cops while racing to clear his name of the mysterious murder.

Yup. Another JACKIE CHAN revival project is coming out, but Chan himself will NOT be starring in this one like he did with ‘Police Story 2013’ and ‘CZ12’. He will serve as producer to introduce a younger generation of action stars in WHO I AM? 2015!

Can they possibly top the awesome classic 2-on-1 rooftop fight scene from the original? Probably not. But hey, it looks fun and action-packed!