Brought to the screen many times in Hong Kong cinema and most famously by martial arts star Donnie Yen in ‘Heroes Among Heroes’ and ‘Iron Monkey’, Chinese heroes ‘Beggar So’ and ‘Wong Kei Ying’ is making a return to the small screen via HBO ASIA. The anthology consist of MASTER OF THE DRUNKEN FIST: BEGGAR SO and MASTER OF THE SHADOWLESS KICK: WONG KEI YING.

Both films is executive produced by veteran action choreographer COREY YUEN (Fong Sai Yuk, Rise Of The Legend) and set for release on December 25th and 26th. Check out the Posters and Trailers below! 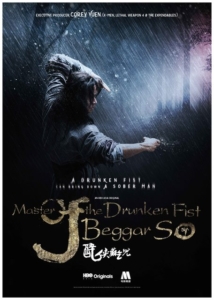 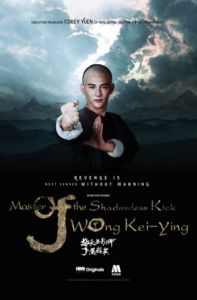 SINGAPORE, OCTOBER 17, 2016 – The premiere dates of the inaugural HBO Asia Original anthology of martial arts action TV movies co-produced with China Movie Channel (CMC) were announced today. Both movies will premiere on the same day during primetime across Asia on HBO and RED BY HBO and in China on CMC’s premium subscription channel, CHC. “Master of the Drunken Fist: Beggar So” premieres at primetime this December 25 while “Master of the Shadowless Kick: Wong Kei-Ying” will debut a day later on December 26. This is the first time a China co-production movie will premiere on the same day in China as well as across the region. Both movies will also be available on HBO GO and HBO ON DEMAND in Asia, as well as on CCTV6 in China at a later date.

HBO Asia will be distributing1 the movies which were executive produced by Hong Kong action director, Corey Yuen (The Transporter, X-Men) outside of China while CMC handles distribution within the mainland. The trailers for both TV movies, which boast a cast of Chinese actors professionally trained in mixed martial arts, kung fu and muay thai, were revealed today.

The first movie in the anthology, “Master of the Drunken Fist: Beggar So”, stars Cao Jun (曹骏) [Lotus Lantern (宝莲灯); Magic Mobile Phone (魔幻手机)] as Beggar So Chan (苏乞儿). Due to a conspiracy, wealthy So Chan loses everything but is saved by the Beggars’ Sect. He learns the long lost martial art – Drunken Fist, to defeat the person who framed him.

Sun Hao-ran (孙浩然) [God of War, Zhao Yun (武神赵子龙)] stars in the titular role of Wong Kei-ying (黄麒英). A physician, he learns the legendary martial art – Shadowless Kick – to take down the ruthless and treacherous new governor of Canton in “Master of the Shadowless Kick: Wong Kei-Ying”.

Both movies were written by a team of writers from China, while award-winning Singaporean screenwriter, Koh Teng Liang, contributed to the screenplay of “Master of the Shadowless Kick: Wong Kei-Ying”. These two anthology TV movies are one of four HBO Asia Original productions this year. The others include HBO Asia’s first returnable series HALFWORLDS Season 2 and HBO Asia’s first Taiwanese co-production, THE PSYCHIC.