UPDATE: Producer Hiram Garcia confirms the film will actually be a follow-up to the original and NOT a reboot. Garcia stated:

“There’s a lot of things going on with [Big Trouble in Little China]. We are in the process of developing that, and let me tell you, the idea is not to remake Big Trouble in Little China. You can’t remake a classic like that, so what we’re planning to do is we’re going to continue the story. We’re going to continue the universe of Big Trouble in Little China. Everything that happened in the original exists and is standalone, and I think there’s only one person that could ever play Jack Burton, so Dwayne would never try and play that character. So we are just having a lot of fun. We’re actually in a really great space with the story that we’ve cracked. But yeah, no remake. It is a continuation, and we are deep into development on that as well, and I think you’ll start hearing some things about that probably soon.”

UPDATE: Dwayne ‘The Rock’ Johnson recently spoke to ENTERTAINMENT WEEKLY about ‘China’ and mentions that he wants original director JOHN CARPENTER on-board with the reboot in some capacity. Johnson stated the following:

“I loved reading the reactions from the fans, that they were so polarized – I’m the same way. My response is: know that I come to the project with nothing but love and respect for the original, which is why we want to bring on John Carpenter. I loved the original when I was younger and I loved the main character – all the characters. It felt like if we surrounded ourselves with the right group of people, the right writers who loved the movie too and wanted to honor it, bring on John Carpenter in some capacity… If we did that, then we have a shot at hopefully making something good. Let’s see what feels good, what we can come up with and then go from there. As we write it, if the whole thing starts to stink up, then we thank everybody for their efforts and accept this just couldn’t make it.”

Franchise booster DWAYNE ‘THE ROCK’ JOHNSON coming off of his huge opening weekend with ‘San Andreas’ grossing over $100 million worldwide, is in talks to serve as producer and star of the reboot of John Carpenter’s cult classic BIG TROUBLE IN LITTLE CHINA!

Stepping into his ‘Furious 7’ co-star Kurt Russell’s most iconic role as trucker ‘Jack Burton’, Johnson definitely have the charisma and witty comedic chops to pull off the character. 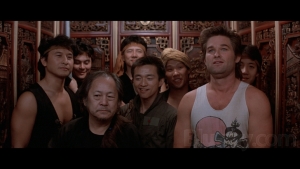 Writers ASHLEY MILLER and ZACK STENTZ (X-Men: First Class) have signed on to pen the script. No words yet on a director.

Now the question is who should they cast as the villain ‘Lo Pan’? How about martial arts star COLLIN CHOU (Flashpoint, The Forbidden Kingdom) as a more badass version of the green eyes seeking villain? 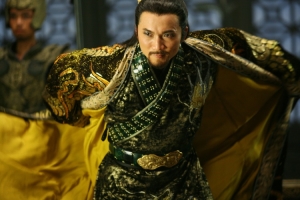 Leave us your comments below!