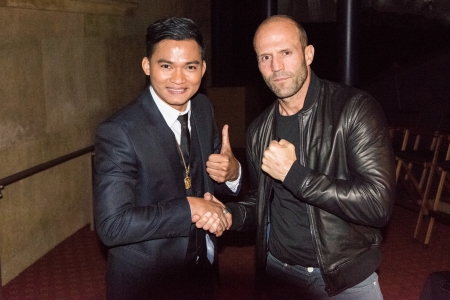 ‘Furious 7’ duo JASON STATHAM and Thai martial arts star TONY JAA may be teaming up once more on a future “fully-fledged fight movie”!

Statham recently spoke to MEN’S HEALTH and revealed the following:

“What I’d like to do is a fully-fledged fight movie. I’ve never done one. I met Tony Jaa when I was out in Thailand and to me he’s an inspirational athlete: one of the greatest real-life stunt guys in the business. We talked about doing a proper fight film where we’re on the same team, and we’ve got a script we’re trying to put together. I’ve never been in a place to do that in the past. I’ve always blamed injuries. But now I know how to fix things. I want to elevate the action in a way that’s never been done before.”

Statham. Jaa. Kickin’ ass. TOGETHER. Count me in!

Statham can currently be seen in the action-comedy ‘Spy’ and Jaa in ‘SPL 2: A Time For Consequences’.

Stay tuned for details on their team-up project!